Get this Pati started 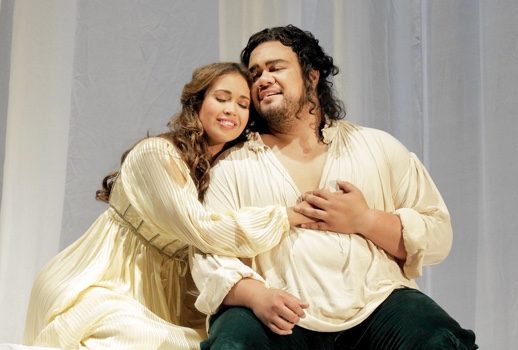 It was not just because the warring households of the Capulets and the Montagues were decked in red and blue respectively (mirroring the colors associated with both Parties), but primarily also because of “Impeach Trump now!” protest at the beginning, as reported by La Cieca. It happened right when General Director Matthew Shilvock was about to give his opening remarks welcoming the audience to the new season.

This incident brought anxiety to the audience who still reeled back from the recent Gilroy Garlic Festival shooting and broad daylight open shooting at nearby Market Street just two weeks ago, and it did result in the exodus of audience at the first break at the end of Act 1. (In the Orchestra section, the shouting was barely heard, so it did add into the uncertainty).

SF Opera enlisted Monte-Carlo Director Jean-Louise Grinda, who made his US debut, to direct the production, and he brought with him the 2012 Genoa’s Teatro Carlo Felice and Opéra de Monte-Carlo co-production.

In the Directors’s Note, Grinda mentioned that “Respecting the period is key to me because it allows us to do justice to the original story and at the same time recognize Gounod’s efforts to imbue the work with a Renaissance flavor. … The time period is evidenced here primarily via costumes, as well as by the spare simplicity of the scenery.”

Lavish costumes and barely-there scenery were exactly what we got at War Memorial, but unfortunately the combination of those two elements wasn’t always proved to be successful. Carola Volles’ costumes were colorful and opulent, particularly pleasing the eyes for the Capulets’ Ball in Act 1. The intended simplicity worked well there, as Grinda managed to avoid turning the Ball into the usual circus, and instead brought the focus on the lovers’ “love at first sight” moment. 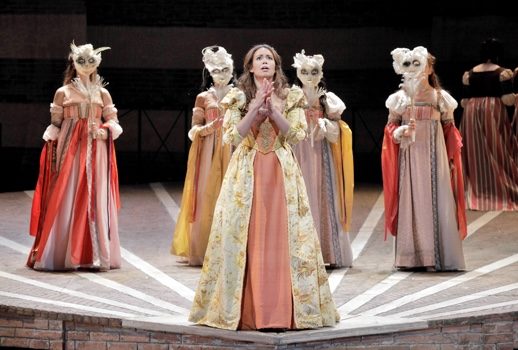 However, things went downhill afterwards. Eric Chevalier’s sets basically consisted of static backdrop with a raised platform with tilted top at the center. For the crucial balcony scene in Act 2, it was simply performed with Juliet on that platform, and Romeo below. Personally, I felt this reduction was overly simplistic (particularly because this scene was very distinctive for both Shakespeare’s play and Gounod’s opera), and it somehow robbed the poignancy of the moment.

Grinda would like to “leave the rest to the imagination”, but here there was nothing to imagine as the audience expected a window with balcony! Similarly, Act 5 called for somewhat specific family crypt, rather than just a regular cemetery, as otherwise, Juliet’s body wouldn’t be just placed on top of the tomb!

The lack of sets also brought attention to the movement of the singers much more than usual, and there were times that I felt they weren’t directed properly. This was particularly evident in the bedroom scene in Act 4. Here, that raised platform was turned into a bed via a white sheet draping from the ceiling and over that platform. However, both Romeo and Juliet jumped up and down that “bed,” looking more like participants in a slumber party rather than heartsick parting lovers!

One of the most puzzling things for me that night was the amount of time required to set and reset such a simple stage each time. Grinda set a single intermission in between the two scenes of Act 3 (after the wedding), but at the end of each act there was a rather lengthy pause. It was especially unfortunate because after the first act, a number of audiences left thinking that it was intermission, some of them didn’t even return!

This production had its fair share of problems, even before the Opening Night. Just three days prior to Friday, Bryan Hymel withdrew from the production citing “personal reasons”, a fact that was reported here as well. Luckily, Pene Pati, who was originally scheduled to sing Romeo only at the last performance (October 1 alongside his wife Amina Edris), was available to cover the entire run. And what a revelation his performance was!

Pati truly seized the opportunity to show off what he’s got, and he worked extremely hard to crush any doubts the audience had. I first encountered Pati during the Adler concert and Simon O’Neill’s recital (which introduced both Pati and his brother Amitai Pati) in Berkeley two years ago. At that time, he didn’t leave much impression on me, so I was pleasantly surprised to see how far he had improved since then. 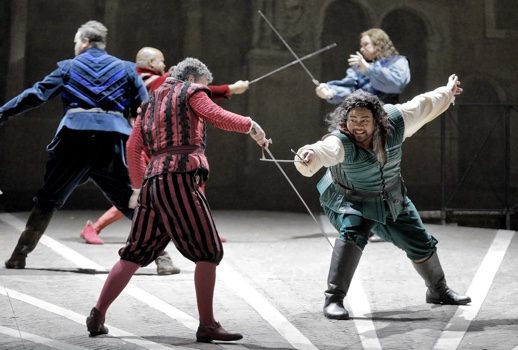 His voice was very lyrical, and I thought in the beginning he sounded rather tentative and, during the Capulets’ Ball scene, occasionally got drowned by either the orchestra or his fellow singers. However, he gained strength in time for the first of the four duets with Juliet, the Madrigal “Ange adorable”.

It wasn’t until the Cavatina “Ah! lève-toi, soleil” that his voice truly came to full-bodied sound complete with glorious colors, particularly of those pianissimi (Yes, I’m a sucker for well-placed pianissimi!) From there he was indefatigable and unstoppable force, all the way to the final duet “O ma femme, ô ma bien-aimée”.

Pati approached the role with Nemorino-like innocence and naivety rather than the usual heroic swagger, making his Romeo seemingly younger than most. In that regard, his was a winning interpretation, as it was closer to Shakespeare’s intention.

As his lover Juliette, Nadine Sierra, winner of the 2017 Richard Tucker award making role debut with this performance, matched his voice both in vocal output and character interpretation. I personally have never really warmed to the color of her voice, but I have to admit that she sang really well on Friday, particularly after Pati came on stage.

Sung at faster pace than usual, her take on the famous Waltz was refreshing because she refrained from the customary self-indulgence that stopped the action, but it was merely the declaration of intent to Gertrude her nurse.

If I might nitpick, I felt that Sierra was the most badly-directed singer that night, particularly since at many points, her movements and gestures invoked the unintended laughter from the audience. The biggest offender was the ill-timed “Où suis-je?” (“Where am I?”) right when Romeo downed the poison, it almost felt like a parody!

SF Opera dedicated a whole article, written by Kip Cranna, SF Opera’s Dramaturg Emeritus, on the Potion Aria (“Amour, ranime mon courage”) that was customarily cut until recently, and how Sierra wowed the audience with it during a concert in 2012.

An unnamed prominent American conductor even made the following remark about Sierra and Potion Aria: “It is high, sustained, and relentless, quite evocative of Juliette at such a desperate moment. And there have been very few sopranos who could handle it. A soprano like Nadine, of course, will have the opposite problem of many of her predecessors: she will have to work to make it look difficult!”

She did perform it beautifully, if not quite as effortlessly as the quote suggested!

With his booming sound, baritone Lucas Meachem definitely made Mercutio’s presence felt, although it was rather unsubtle to my ears. It was as if he was intentionally trying to drown to his fellow singers, knowing that they were mostly lyric singers. Nevertheless, he executed “Mab, la reine des songes” efficiently.

All other comprimario were handled effectively; James Creswell made an authoritative, if rather ambiguous (how did a priest get hold of life-changing potions?) Friar Lawrence; Philip Skinner a commanding Duke of Verona, and Timothy Mix a caring Count Capulet.

I was especially impressed with mezzo-soprano Stephanie Lauricella who made house debut in the trouser-role Stephano. Her taunting song “Que faistu, blanche tourterelle” was performed with perfect comic timing and particularly with full round dark mezzo voice that was truly attractive. I hope she would come back to War Memorial in bigger roles in the future.

French Canadian conductor Yves Abel led the SF Opera Orchestra in an interpretation that was rather swift and exciting. He particularly coaxed an atmospheric, almost dreamy, reading of the Act 2 and Act 4 orchestral preludes, and he was pretty sensitive to the lyrical qualities of many of his soloists. To my ears, the Opera Chorus was a little less refined than usual, although they did get the job done.

But the night truly belonged to Pati, a star-making performance that received long standing ovation from the audience. He himself knew it too, as he and Sierra merrily hopped back and forth in excitement during the bows. Nevertheless, it was a fun night at the Opera. I only wished the stage had been as glamourous as the attendees’ dresses!