We’ve been through the mill

We’re two gay men, with 30-plus years between us, who went together to see the Broadway adaptation of Buz Luhrmann’s Moulin Rouge! 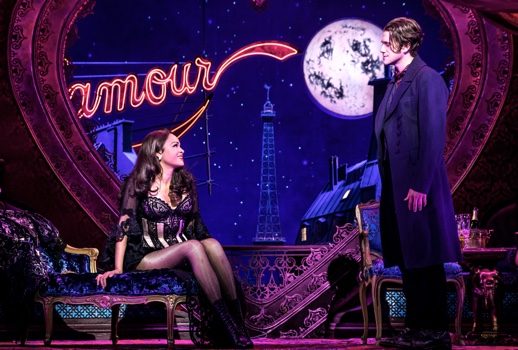 David Fox: Before we get into the weeds, maybe we should explain the set-up here. We’re two gay men, with 30-plus years between us, who went together to see the Broadway adaptation of Buz Luhrmann’s Moulin Rouge! (That exclamation mark is part of the title, rather than a reflection of how excited we were to be there.)

I think it’s fair to say that the source material—from 2001—falls pretty much exactly between our generational groups. So, Cameron, speaking for the younger contingent—why don’t you start?

Cameron Kelsall: Well, you can’t go to Paris without leaving New York, but apparently you can go to The Paris Las Vegas. All it costs is a ticket this garishly designed, aggressively performed stage adaptation of Luhrmann’s movie musical melodrama. Let any doubt that Broadway has become Vegas East be banished as you take your seat for this sparkly juggernaut—the supersized elephant’s trunk that juts over the edge of the balcony box might as well be the MGM Grand sign.

DF: Funny, Las Vegas was my reference point, too. I took one look at the set—and the parade of showgirls and go-go boys who wander around during the pre-show, while cellphone cameras go crazy—and thought, this isn’t the Moulin Rouge (a gritty, populist hang-out); it’s Celine Dion at Caesar’s Palace.

CK: And nearly all that follows will make Cirque and Celine look subtle by comparison.

DF: You could easily imagine that the entire point of this enterprise is excess. It’s the virtual definition of a “let’s throw money at the problem” show.

CK: To say that Alex Timbers directed Moulin Rouge! seems both entirely accurate and an overstatement. He has directed the large cast into various tableaux that surely play to the top row of the balcony, and there’s hardly a visual moment that doesn’t immediately imprint itself, whether good or bad.

But direction is more than just people-moving and arranging bodies into arresting stage pictures—it requires nuance and balance to draw out connections between characters and the vivid inner lives of individuals. Yet hardly anyone on stage gives much thought to what they’re saying or doing, or why their characters would behave as they are. Everything is in service of the spectacle. 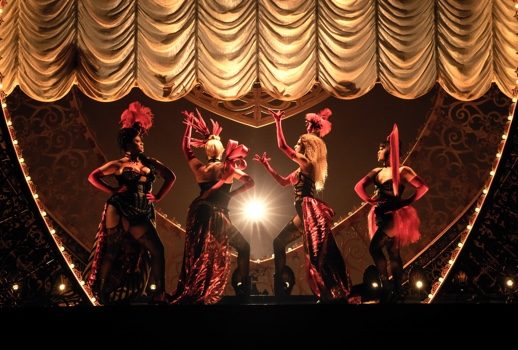 Harold Zidler, the show’s tummler (played by Danny Burstein: to my mind the only person on stage actually acting) looks longingly at a gorgeous boy in the ensemble, and tells him to meet him upstairs. For a moment—hallelujah!—there’s actually a sense of charge. But that’s it, and the lack of chemistry is especially and painfully evident in the two leads.

CK: From her first entrance onward, Karen Olivo looks the picture of health—not exactly what you would expect from a consumption-plagued courtesan. Arriving via trapeze and introducing herself with a musical medley that runs the gamut from “Diamonds are Forever” to “Single Ladies,” she looks (in Catherine Zuber’s bedazzled bustier of a costume) like she’s about to lead a Jane Fonda workout. Sonya Tateh’s choreography doesn’t stray that far from eighties-era aerobics, either.

DF:I’m sorry, but it’s perfect that Olivo’s character is called “Satine”—she’s what you get when you can’t afford satin. Few star entrances are more vamped than this one: Burstein describes her as a brilliant diamond, twice calls her “unique,” and when we finally see her, she descends from the flies like a circus performer.

But though Olivo sings and dances well, and throws herself into the show with sincerity… well, “unique” isn’t in the equation. Nor is it for charming, boyish but generic Aaron Tveit as Christian—though he, too, sings well and works hard.

CK: The ensemble isn’t exactly littered with memorable performances, either, though I agree that Burstein generally raises the stakes. (He’s certainly earning every cent of what I hope is a hefty paycheck.) Robyn Hurder dances up a storm as Nini, the club’s second-banana hoofer, but her affect is entirely Midwestern. I kept wondering how a William Inge waitress wound up in fin-de-siècle Paris.

DF:Then there’s Tam Mutu as the villain, who’s handsomer and more charismatic than Tveit as the hero.

CK: Handsomer than Tveit, yet, but equally sexless. To call him a cartoon villain would be to give too much credit—he never seems dangerous or deranged for a moment. 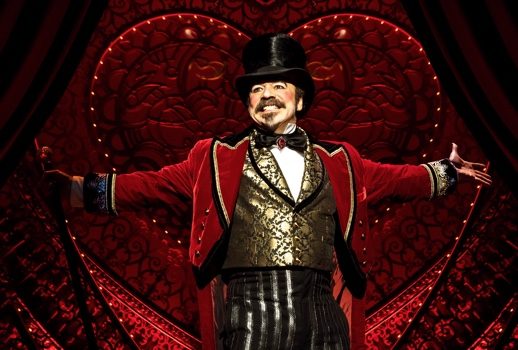 DF: Ricky Rojas (Santiago) is a Johnny Depp lookalike who proves there’s more to the real Depp than eyeliner and novelty facial hair. And Sahr Nguajah, as Toulouse-Lautrec, should be more central to the action than he is. I mean, everybody’s thoroughly professional—but also easily replaceable with other performers, which I’ll bet is no accident: clearly, the producers are hoping this show runs forever.

CK: It’s been a decade or more since I last watched the source film, and I cannot say for sure whether Luhrmann endeavored to suggest the seedy world of Montmartre and the actual Moulin Rouge. (My guess is no—he is nothing if not a consummate showman, with an aesthetic grounded in glittering excess.) But the result here doesn’t even slightly suggest Paris, or period, or pathos. It’s a Euro-Disney floorshow stretched to two-and-a-half hours, which features a smattering of songs you know and nary a moment of actual emotion.

DF: The soundtrack (and I’m using that term pointedly) is a sadly perfect distillation of the whole of Moulin Rouge!. Dozens of jukebox hits—mostly love songs, and some really terrific ones—are mashed up into medleys, where we hear just enough for the audience to burst into applause… after which, they’re abandoned. The fragments we hear rarely further the plot, and often we don’t get enough even for the emotional point to register. But the crowd hears, recognizes, and endorses them—so their work is done.

CK: This speaks to a curious (and disquieting) phenomenon I’ve recognized at various screen-to-stage adaptations on Broadway, which are now legion. You can almost feel the audience waiting with bated breath for the moments they remember from the film. Edward snapping Vivian’s hand with the jewelry box in Pretty Woman. Elle Woods arriving in pink Playboy Bunny drag in Legally Blonde. Regina George asking if butter is a carb in Mean Girls.

In this simulacrum, the audience pays more attention, and derives more enjoyment, from their memories and associations than from the actual show. In Moulin Rouge!, you get this twofold: in the dialogue and scenes lifted directly from the movies, and in the snatches of songs that are heard throughout the night (many of which were written post-2001). I constantly sensed that peculiar energy.

DF: A final, infuriating moment for me is the wildly overstaged curtain call, with members of the ensemble literally standing at the edge of the stage, exhorting the audience to rise and cheer. It’s the most coercive display of on-boarding I’ve seen since the glory days of EST.

I was taught by theater people I admire that curtain calls are a moment to allow the audience to meet the actors as people, and for mutual acknowledgement of an experience they had together—really, an expression of humility in the service of art. Here, it’s another unnecessary floor show, designed to goose the audience into a standing ovation (as if there were the slightest chance that wouldn’t happen on its own).

CK: Here’s a lesson I’ve learned—painfully— time and time again: Always be wary of musicals with punctuation in the title.

DF: I can’t say that the show isn’t superficially entertaining. But I weep for what it says about contemporary Broadway.