Crimes of a ragged century

The Mac-Haydn Theatre are giving Ragtime, a musical about turn-of-the-century race relations, unwelcome immigrants, labor revolts against brute force and the collapse of the traditional family. 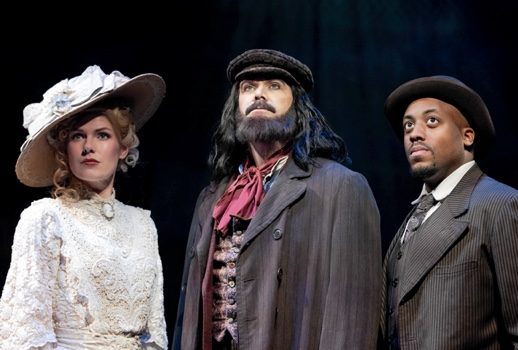 Quite by chance—en route to Tanglewood—I stumbled upon the Mac-Haydn Theatre, which has held the fort for fifty years in Chatham, New York. Besides a seven-musical mainstage (ten days each run), the company gives three Children’s Theatre shows a summer. This week (through next Sunday), by chance, they are giving Ragtime, a musical about turn-of-the-century race relations, unwelcome immigrants, labor revolts against brute force and the collapse of the traditional family. Too timely for coincidence.

Summer theater troupes make it their business to astonish. Their focus group is folks with an urban winter or an urban past. Such beady eyes are used to paying far too much to sit far from the stage for the glittery names and glitzy productions that tease and tingle a Broadway palate. When they flee the city’s summer, they arrive primed to condescend, especially at the absurd old-fashioned prices. (You call 40 bucks a ticket price?)

You may well be astonished at the sheer ambition of such companies, the professionalism of chorus and choreography and design. If you have parents or kids or visitors to entertain, they may not be prepared for how good it is. Kids, sitting close to the action, may even get bit by the theater bug, a virus more nefarious than Lyme. Between evenings of Wagner and Shostakovich, the alternative can be relaxing and invigorating.

Ragtime is set in New Rochelle, just “forty-five minutes from Broadway,” but it couldn’t be further from George M. Cohan’s classic show of that name, set in roughly the same era. We know the time because Stanford White, New York’s greatest architect, has just been shot (before our eyes!) by the husband of his mistress, Evelyn Nesbit, “the girl in the red velvet swing.” (She does swing in this production; alas, it is not of red velvet. This may be my chief—almost my only—criticism of the occasion.)

Stephen Flaherty’sscore for Ragtime, is wittily woven with threads of Scott Joplin, whose era—Jim Crow in the South, the birth of Harlem’s Renaissance up north—is the era of E.L. Doctorow’s source-novel. The story cuts about among three or four milieus, with casual appearances by real persons among the fictive ones: Emma Goldman, J.P. Morgan, Admiral Peary, Harry Houdini.

But the scenes as written (by Terrence McNally) do not make up a play. Lynn Ahrens’ lyrics must do double or triple duty, putting private thoughts into verse but also providing the exposition, the character portrayals we might expect from the chatter of a “musical play.”

“The Crime of the Century” gives us all we need to know about the Stanford White affair and the titillating obsessions of the masses, plus it’s a delectable number. “Henry Ford” introduces the assembly line—and therefore serves as background to the immigrant Tateh’s wish to escape it, Emma Goldman’s determination to overthrow it, and Coalhouse Walker’s reliance on the purchase of a Model T to establish his equality with white society.

“What a Game!” is a tribute to old-fashioned pastimes, but with an edge of simmering ethnic hostilities and toxic masculinity. “He Wanted to Say” provides the mental background for two inarticulate men so that we can understand the revolutionary friendship they forge.

It is a cleverly constructed show. A couple of songs struck me as possible standalones: “New Music,” “Wheels of a Dream”—attractive tunes, metaphorical sentiments. I didn’t care for the anthem, “Back to Before,” which sounded just like a Broadway anthem. Any old Broadway anthem. Mother is an individual before she sings it; it doesn’t sum her up.

“There were gazebos,” someone says in the opening, setting-the scene song, adding, “And there were no Negroes.” The awkward rhyme is as startling as the unwelcome sentiment; they rhyme in thatsense. The other N-word is frequent in white mouths, because that is the nature of the material and the era; it makes a calculated shock. We draw back from, are fascinated by, the improbable and violent story.

The Mac-Haydn Theatre is small by Broadway standards, with a stage in the round. Performers seldom stand and deliver—they must charge about, pace the streets in agitation, turn as if seeking inspiration from different quarters of the heavens. This has no effect on what we hear since they are all mic’d, though not excessively.

Director John Saunders and choreographer Sebastiani Romagnolo have made astonishing demands upon two dozen choristers (looking mighty good in Jimm Halliday’s magnificent period costumes), who run riot around the dozen principals in narrow alleyways through the audience and about the stage, pausing to harmonize, rant, strike, announce a verdict, dance to distraction. They convincingly represent old—or new—New York.

Andrew Gmoser’s sets include the torch deceptively agleam on the Statue of Liberty. Otherwise, he merely sketch hints a Victorian mansion, a Harlem saloon, the Ford factory, a streetcar. His lighting included a sunlight effect on a rattling streetcar that was quite magical. An orchestra of six sat in widely separated parts of the theater keeping an eye on music director David Maglione.

The expert cast centered upon the three figures who are most transformed. Mother, Rachel Rhodes-Devey, is her family’s moral center. Her gradual understanding that her moral certainties are not shared by the world at large only makes her more determined to stand up to it. Rhodes-Devey had a charming presence and a powerful if not overly distinctive voice.

Tyrell Reggins sang a sturdy Coalhouse Walker, faking ragtime piano (there are no keys on the instrument), making love to the dulcet Sarah of Maya Cuevas, projecting tenderness, ire, surprise. His ultimate betrayal shattered us the more because he did not seem to anticipate it.

Gabe Belyeu played Tateh, the Jewish immigrant, determined to succeed if only to improve the lot of his daughter, was touching. But he had fun, too, when self-transformed into Baron Ashkenazy, founder of an early “moving picture” company.

While these self-inventors of the new America transform themselves, Steve Hassmer’s Father, who had hopes of becoming an Arctic explorer, sinks under the weight of a confusing world. Too bad. He had the voice and presence for a luckier hero, but he made his honorable attempts to face his confusion poignant.

Mother’s family were well taken: Kylan Ross played the younger brother whose passion for louche Evelyn Nesbit is the explosive that leads him to revolution. He looked like an open page, ready to be writ upon. Todd Fenstermaker was a welcome sarcastic dissident as her father. Paxton Brownell, as her son, moved credibly from incomprehension to surly pre-adolescence.

The egotistical celebrities whose careers encircle and interweave the plot were led by Julie Galorenzo, a dauntless but not unsympathetic Emma Goldman; Sarah Kawalek, a delectable Evelyn Nesbit, mordant when her post-notoriety career goes nowhere; Andrew Burton Kelly a sturdy Houdini; William Taitel rather youthful for Booker T. Washington but with a dignified presence and a smooth and tidy singing voice.

The music and comedy properly leavened the grim story of Ragtimeto create a spirited evening.After all, this was theater, derived from fiction. The true stories of that time, from the Triangle Shirtwaist to the race riot in Greenwood, Oklahoma, were far more terrible.