The Glimmerglass Festival premiered a searing examination of race, identity, and the fraught relationship between communities of color and law enforcement. Blue, with a score by Jeanine Tesori and libretto by Tazewell Thompson. 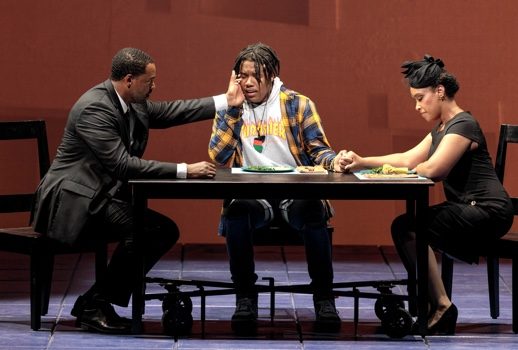 This weekend, sandwiched between a persuasive production of The Ghosts of Versailles and a routine revival of La Traviata, the Glimmerglass Festival premiered a searing examination of race, identity, and the fraught relationship between communities of color and law enforcement. Blue, with a score by Jeanine Tesori and libretto by Tazewell Thompson (who also directs), brings the joy and terror of raising – and being – a young Black man in America to the opera stage.

This art form has always been political, but composers of the past often camouflaged their messages in stories of the ancient world and scenarios that transported audience to far-flung locales. To sit in an auditorium in upstate New York and confront a work that mirrors the world shown on the news every night feels particularly urgent.

In fact, “urgent” is the first word sung, as a trio of Girlfriends (sopranos Ariana Wehr and Brea Renetta Marshall and mezzo Mia Athey – all members of the Glimmerglass Young Artist Program and all singers to watch) descend upon their best friend, the soon-to-be Mother (mezzo Briana Hunter).

That “urgent” happiness they express at their friend’s pregnancy turns to worry when Mother reveals she is carrying a son. “Thou shalt bring forth no black boys into this world,” they cry in unison, knowing too well the dangers of raising a child who might become a target.

Father (bass Kenneth Kellogg) and his friends (tenors Camron Gray and Edward Graves and baritone Nicholas Davis) receive the news differently, engaging in straight-man backslapping and congratulating the papa for siring a boy on the first try. They are all policemen and men of color, a complicated duality that largely remains unspoken throughout their revelry. But it will eventually form the conflict, and the tragedy, of the piece.

The baby grows into an activist, played as a teenager by tenor Aaron Crouch, who is ashamed that his father proudly calls himself an “Officer of the Law.” The fear first verbalized by the Girlfriends rises into Father’s throat as his boy commits himself to protest culture and civil disobedience. He is now “a walking, moving target” for the very people Father calls his brothers in blue.

Inevitably, Father’s worst fears are realized. In the style of classical drama, Thompson keeps the tragedy offstage, focusing instead on its aftermath in the tense second act. The real story – the palpable heartbreak – lies with how people endure the hardest moments of their lives.

Yet the work also doesn’t shrink from overt ideological sentiment. In a moving confessional scene between Father and a Reverend (baritone Gordon Hawkins, stirring and in firm, fine voice), the long-simmering questions of balancing an officer’s identity with a Black man’s life-experience boils over. “My name doesn’t change who I am to others who see me under a name they’ve given me,” Father sings, acknowledging – for the first time – the truth embedded in his son’s teenage cynicism.

Kellogg projects the conflicted emotions of a man whose entire self was swept away in one moment, in the aftermath of one action. At times I questioned whether Thompson could have gone further in addressing questions of racism and policing head-on, but Kellogg’s impassioned performance deepens the material in the spots where it merely skims the surface level. His deep, commanding voice communicates the authority of his position, but he manages to lighten his tone in tender moments with his wife and son.

Hunter has less to work with as Mother, disappearing for long stretches of the opera as the creators focus on the central male relationship. Yet she too imbues her solos with ecstasy and anguish as the moment demands. Her trajectory from the hopeful future she imagines in the opening scene – a successful business owner, a loving marriage, a happy family – to the grim reality that seals her fate years later is shattering. The sweetness in her supple lyric mezzo belies a glint of steel.

Crouch – a singer I’ve regularly encountered at the Curtis Institute, where he studies – is the only casting misstep. He is affecting as an actor in his two brief scenes, projecting the certainty of youth in rebellion against authority. But although he bills himself as a tenor, his voice continues to develop in a baritonal direction, and high notes are becoming hard-won. The hooded quality to his sound also doesn’t offer enough contrast with Kellogg’s sonorous bass.

Tesori’s score is not particularly inventive, but it is frequently effective. She folds distinctly American idioms – jazz, bebop, blues – into a sweeping, chromatic musical language, with each change in style representing a change in mood. Tense piano arpeggios punctuate an argument between Father and Son, while gospel strains underpin funereal mourning. The final scene – an optimistic fantasy for the future – unspools in bright colors.

Thompson’s production takes a similar approach, with the smart use of projections and minimal scenery (by Donald Eastman), and lighting by Robert Wierzel that manifests emotion and mood. But perhaps the most affecting element of the opera is the silence that envelopes the stage in its final moments. Blue speaks both to our current political moment, and to the long history of racism and police brutality in the United States. It isn’t afraid to linger on the moments of violence that render us speechless.