Nixon in Jersey: The Renixoning

The singers and the orchestra carry the show, but where do they carry it? 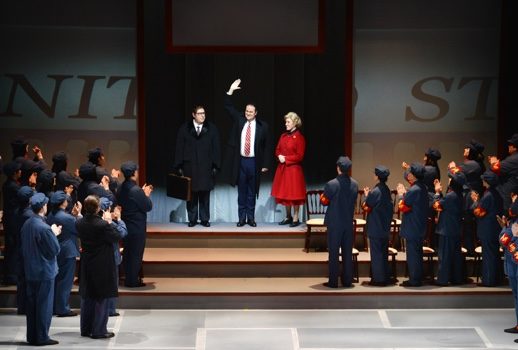 The annual Princeton Festival in June climaxes with a fully staged grand opera at the McCarter Theater on campus. This year’s offering (last Sunday, to be repeated next Sunday) was John Adams’s most popular opera, Nixon in China, given a first-rate production and performed by an excellent youthful cast.

This complex and multilayered work was given its due largely thanks to the scenic and projection design of Jonathan Dahm Robertson, full of projected headlines and news images as well as circuits and snowfalls and airplanes,and by the lighting design of Norman Coates, who implies passing time and marching armies by having shadows ripple over ranks in uniform—an effect as beautiful as it is symbolically effective, as are many of the plays of light on the simple, elegant costumes by James Schuette.

Nixon in China commemorates the historic visit of President Nixon (who had built his early career baiting all Communists and denouncing Red China) to Chairman Mao and the government the U.S. had finally recognized as legitimate. It was the winter of 1972 and Nixon was at the height of his prestige as a statesman.

He brought his wife, Pat, along and his chief foreign policy advisor, Henry Kissinger, and was feted by Mao, Mao’s ex-movie-actress wife, and his prime minister, Chao En-lai.

These six figures are, essentially, the characters of the opera, which consists largely of formal encounters and formal declarations (speeches, toasts, jokes), plus a few informal asides, conversations, daydreams. It’s a pageant, an opera based on an official program; there are no confrontations or melodramatic moments. This is an opera without a story. The characters reveal themselves, a little, but there is no drama, no transformation. They meet the enemy and remain themselves.

There is operatic structure in, for example, having a ballet, a military procession, an Act I climax with a concerted passage for the leading gentlemen (not the ladies, though three “translators” join in), but this is not a confrontation in bel canto style but a chorale of private ruminations and asides.

Alice Goodman, Adams’s librettist, is a poet and no playwright—she had similar problems moving the action in The Death of Klinghoffer, her final libretto, despite the obvious conflict and climax of that story. (The controversial response to that work led her to renounce libretto-writing. I agree that it was not a good fit.) She likes to explore motivation in ruminative monologue; dialogue towards a climax eludes her, but Adams’s music is not emotionally introspective either.

The singers and the orchestra carry the show, but where do they carry it? When great historical events were made into grand operas in the past (often with lip service barely paid to history), some unhistorical but iconic drama would be set to music in the foreground within the historical setup, so that we could identify with characters, care for them, observe their triumph, frustration, doom in historic context.

This made many historic events, movements, feelings comprehensible to new eras and served as the template for spectacular historical films—which have also gone out of style. The movies are hokey. So are the old grand operas, but if sung exuberantly and re-thought sensitively, the old warhorses still pack a punch.

Is there a punch in Nixon in China? Is the political symbolism of 1972 clear to modern audiences, and is anything gained by setting it against the much later events of Tiananmen, for example (referenced by projection)?

When the opera was composed, everyone knew Watergate, and it was affecting to look at a president unaware of the false steps he was about to take, to try to understand by the musical setting why his character would lead him make those choices. (It is affecting today to remember a time when a president of the United States was capable of feeling shame.)

Baritone Sean Anderson, a tall and vocally imposing Nixon, projected the character’s forceful image and also his self-doubt. For the sake of the opera, we see more human links than perhaps reality would have found between him and the weary Pat Nixon of Rainelle Krause.

A certain unsteadiness of her large and well-focused soprano in the opening scene of Act II hinted at this insecurity, this false note, this wonder at finding herself, with her lack of pretension, in so aristocratic a situation, being gracious to peasants, pigs, small children, unable to restrain her sympathy for the peasant girl raped in a ballet. Hers is a voice of considerable lyric power.

Teresa Castillo sang the coloratura fireworks of Madame Mao, who draws tremendous attention with her spiky fioritura but, like the Queen of the Night, has actually very little to perform. Castillo, like all Madame Maos I can think of, sings the Queen as well. She is brilliant if not rock solid in the role—her voice has more colors in it during the sentimental duet with Mao.

If she and Adams can get away with this, they could give us a dramatic love story for, say, an American consul and a Chinese secretary in the midst of Act II.

Cameron Schutza possesses the freaky tessitura for the aging Mao’s philosophical reflections and double-tongued diplomatic barrages. I was surprised to find that he has sometimes essayed scenes of the young Siegfried, though when he takes on Adams’s high ranges he truly seems the boy who knows no fear. His gentler phrasing in the final scene suggested many roles in which he could be valuable.

Joseph Barron sang Kissinger. He also sings Figaro and Anderson sings the Count; that appears to be Adams’s view of the relationship, with Nixon commanding but not always reasonable, Kissinger as the universal—but not always dignified—factotum.

John Viscardi, who also makes a career of Mozart baritone roles, sang Chou En-lai with a stage presence that seemed more obsequious than impressive. It was not clear whether his diffidence was due to Adams’s sparing need for his presence or the direction of Steven LaCosse.

Having only seen Nixon in China at the Met, where I found it rather more successful than Adams’s other operas, I had my doubts that it could make as much of an impact on a small stage, less equipped with bells and whistles. The Princeton Festival production, though the projections and lights are as spectacular as any company can offer, reassures me that first-rate voices and a first-rate orchestra can pull it off in a small house as well.

[Editor’s note: Due to a bit of organizational confusion on the part of your editor, both John and David Fox were assigned to critique this performance. Thus the “stereo” effect in these two reviews.]