The Princeton Festival has long been a “Little Engine that Could,” but the current operatic offering, John Adams’ Nixon in China, is a good deal more than that. 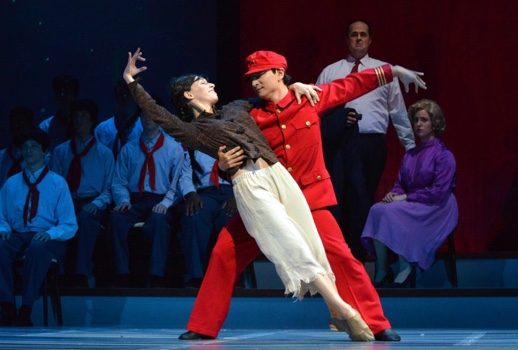 First of all—bravo to the Princeton Festival! Now celebrating its 15th season, this team effort has long been a “Little Engine that Could,” but the current operatic offering, John Adams’ Nixon in China, is a good deal more than that.

Though I think the piece is ultimately a crowd-pleaser—certainly it seemed so at Sunday’s opening performance—it’s an ambitious and out-of-the-box choice, and one that requires substantial forces to make it work.

Here, conducted by Festival Director Richard Tang Yuk and directed by Steven LaCosse, it has all that and more. The cast is strong across the board, with exceptional work by Sean Anderson as a vocally and dramatically towering Richard Nixon; Cameron Schutza, whose plangent tenor brought unearthly beauty to Chairman Mao; Teresa Castillo, a glitteringly virtuosic Madame Mao; and John Viscardi, a compelling Chou En-Lai, who sounded particularly lovely in his quiet, contemplative passages.

A challenge of Adams’ musical language is the need for absolute precision in the playing—very occasionally, one could detect that these forces aren’t a regular full-time orchestra, but more often, textures were beautifully cohesive, as was much of the choral singing. Even the ballet—yet another challenge—was well-choreographed (by Graham Lustig) and executed.

The elegant staging had flair and style to burn. In short, few of even our major companies could equal the strength of resources and exceptional taste on display in this Nixon in China.

Because for better or worse (and you need to judge for yourselves), the work is a veritable laboratory for Adams’ signature musical looping—that is, working and reworking a musical phrase, often repeating a section unchanged multiple times before inserting new melodic material that subtly morphs and colors the line.

For me, I’m divided. There are stretches of Nixon in China (hereafter NIC, to provide a brevity I wish the work itself followed)—especially the lengthy orchestral interludes—which dazzle and shimmer and beguile me completely. But a little goes a long away (the opera runs nearly three hours), and by the end I was ready to jump out of my seat.

More specifically, I was remembering a monologue from Christopher Durang’s Why Torture is Wrong, where a woman, trapped in her theater seat at Tom Stoppard’s The Coast of Utopia, literally wills her heart to stop.

It doesn’t help that neither NIC’s musical style nor especially its cultural politics have worn well in the 32 years since its premiere. It’s partly the subject matter, which portrays a fundamentally failed but noble effort at détente so utterly removed from our present world it seems as out of reach as Game of Thrones.

Even more problematic is Alice Goodman’s ponderous libretto, which attempts to be lofty, philosophical and poetic, but ends up mostly sounding pretentious and intellectually squishy.

But it’s also that Adams himself, superbly gifted at creating abstract arcs of gorgeous sound, can’t figure out what to do with voices or narrative. A few ensembles work reasonably well, though even they are hyperextended (and it’s best to gloss over Goodman’s wordsmithing). But a fatal flaw is his inability to create individual characters through music.

In her showpiece scene, Madame Mao sounds distinctive through a barrage of acuti and scattershot coloratura. But the rest could be interchangeable, especially in an early scene with Nixon (baritone), Mao (tenor), Kissinger (bass) and Chou En-lai (baritone).

Even less persuasive is the solo writing, where Adams’ looping becomes downright nonsensical. Just listen to Nixon’s first monologue—not since Sandy Dennis in Come Back to the Five and Dime, Jimmy Dean, Jimmy Dean had I heard someone start a sentence, stop, and start over so many times.

Take all of this together, and for me, Nixon in China feels more like an oratorio than an opera. The best realized scenes have a kind of stately grandeur and big-picture vision, but there’s very little action.

That stateliness was also reinforced visually here, with minimal movement, leaving much of the imagery provided through scenic designer Jonathan Dahm Robertson’s evocative projections and Norman Coates’s moody lighting. In a sense, the production tended to reinforce Adams’ musical language—impressionistic, spare, fragmented—rather than flesh it out with additional details.

Frankly, I’m not sure which is the more effective approach, but I certainly welcomed the restrained sophisticationon view here, which clearly also delivered maximum punch on a modest budget—all of which are welcome hallmarks of a Festival that should be on every local music lover’s radar.

[Editor’s note: Due to a bit of organizational confusion on the part of your editor, both David and John Yohalem were assigned to critique this performance. Thus the “stereo” effect in these two reviews.]