While Luciano Pavarotti may have brought opera to the people, once he realized how lucrative it could be, there was a string of promoters who helped him turn all that adoration into cold hard cash. 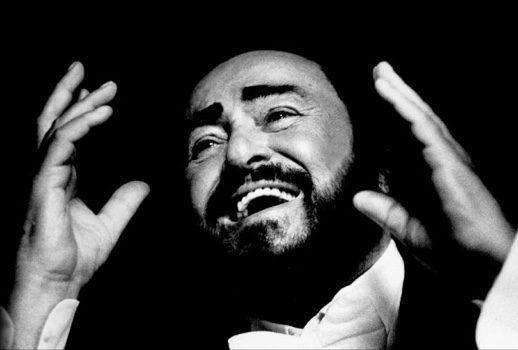 The marketing machine at Decca Classical is such a juggernaut some of you may be surprised to learn that Luciano Pavarotti has been dead for 12 years.  What with 24-bit remasterings and now Blu-ray reissues and re-packagings (back to the original covers…genius!)  the torrent of audio releases seems unending.

Yet since his career was right at the birth of video performances (and he starred in that historic first telecast La bohème from the Met in 1977) we do have but a precious few showcasing his early maturity that capture him at his very best.

Flash forward 30-odd years in his career and he’s selling out intimate venues like Hyde Park and Dodger Stadium all in the name of bringing opera to the people. What happened in between is a phenomenal story of a tremendous talent fed initially by charm and personality that later turned neurotic with avarice and epic self-indulgence.

One area of entertainment that Luciano Pavarotti never conquered, though, was cinema. In spite of Metro-Goldwyn-Mayer sinking over 40 million dollars in production and publicity costs into Franklin J. Schaffner’s Yes, Giorgio, the film ended up disappointing nearly everyone who saw it and a few people who didn’t.

In the finale, Pavarotti’s face is pulled back tighter than Joan Rivers, and with so many filters on the camera lens you’d think it was Lucy in Mame. Stealing a page from Barbra Streisand’s playbook (and perhaps her recording engineer) he holds that last phrase of “Nessun dorma” over a total of 17 seconds. (Papa can you hear me in Modena?)

Oddly this film is never even mentioned in the new eponymously named documentary with its tagline, “Genius lives forever”, directed by Ron Howard and oh-so skillfully edited by Paul Crowder, who also worked on Howard’s Beatles doc, Eight Days a Week.

For while Luciano Pavarotti may have brought opera to the people, once he realized how lucrative it could be, there was a string of promoters like Terry McEwen, Herbert Breslin, Harvey Goldsmith and Tibor Rudas who helped him turn all that adoration into cold hard cash.

The film opens with an episode that nearly brought me to tears. Pavarotti finds himself at the Teatro Amazonas in Manaus and makes his way to the theater in the hope of singing on its hallowed stage which once hosted Caruso. Someone comes to unlock the theater and, of course, the tenor’s entourage includes an accompanist.

So he stands on the stage and, after making a few warm-up noises, sings an Italian art song (I think Tosti but don’t quote me). He’s obviously towards the end of his career (that really didn’t end…and certainly won’t if Decca has anything to say about it). It was all filmed by someone’s hand-held video camera who happened to be part of the group but you see Pavarotti singing for himself and enjoying it which probably didn’t happen all that often at this point in his life.

Then the talking heads start and I was surprised that they managed to secure the cooperation of his first wife Adua Veroni and his daughters Lorenza, Cristina, and Guiliana. There’s Plácido Domingo, José Carreras, Joe Volpe and Carol Vaness all saying the most glowing things about the deceased.

Then someone with a great sense of humor blasts Scarpia’s entrance from Act I of Tosca and we’re talking to Herbert Breslin the most evil man in all of classical music (if not the world…I adore him). Depressingly he manages to mind his manners. It’s Adua who pretty much walks away with the movie because she’s sincere and has that Italian sense of humor that’s martini dry and with two olives of irony.

Oh and Madelyn Renee and, of course, Nicoletta Montovani (wife numero due), who I assume is one of the masterminds behind this whole project. Who knew Anne Midgette was so adorable? It’s all so clean that bubbles are practically coming out of everyone’s mouth. Apparently the funeral was televised but I missed it so it’s nice to be invited to the wake.

Meanwhile all I can think of is when the hell is Renata Scotto gonna show up and burn this show down to the ground? I couldn’t believe I’m watching a documentary about an opera singer and there’s not a whisper of scandale. What planet is this happening on?

What about Joan Sutherland’s story about recording Maria Stuarda in 1974 and you-know-who shows up not knowing his music so they had to postpone the recording sessions for an entire year? He did it again to the Bonynge’s in 1988 with Adriana Lecouvreur except this time they had a back up plan called Carlo Bergonzi. Ouch.

Ten years later (one hears) Richard Bonynge actually had to withdraw from conducting an Italian performance of L’Elisir d’amore because Pavarotti’s shenanigans were so monstrous he couldn’t abide staying. These were the people who made him and that was how he treated them.

I don’t think a single person mentioned the fact that Pavarotti couldn’t count or read music (and there’s ample evidence of both). Plus he had a fleet of repetiteurs and coaches pounding notes into him whenever he deigned to make himself available and he still showed up making everyone worried whether he’d make it through opening night.

What about Ardis Krainik firing him from Lyric Opera of Chicago once someone figured out that he’d cancelled as many performances as he’d appeared in? By the end he’d dug himself into that same hole with Covent Garden too (He announced he was going to sing Otello there remember?). Oh and that Otello. I have a confession and I hope everyone is sitting down. I really enjoy that recording. The chorus is incredible.

Sure 56 might have been a tad too old for your first shot at Verdi’s greatest tenor part but it’s just in concert right? Two nights in Chicago and two at Carnegie Hall. Not like it was going to be televised except… it was.  So the good folk at PBS must have been weeping during the pledge drive that year.

It turns out that recording is really a construct of those four nights because of our tenor’s antics (including installing his favorite coach Leone Magiera (Mirella Freni’s first husband) behind the throne he was sitting on during the concert to throw him his cues, notes, handkerchiefs, everything) precluded them from turning it into the multimedia sensation Decca had planned.

Honestly I do think he sings well and his diction, which was his glory, is magnificent. Everyone else is great too and the sonics are spectacular. I’m an audiophile I can’t help it.

What Volpe went through to get that man on stage for his final Met performances? It’s all in his book. The biggest opera star in the world canceled his own farewell at the Metropolitan Opera.  Let alone all the nonsense with the La fille du régiment revival, thinking he was going to recapture his youth but ending with his signature aria transposed down.

What about the classic story about the Verdi Requiem recording and the basket full of cash that was lowered from the ceiling while Pavarotti was doing a take of the “Ingemisco” because he insisted on being paid in USD cash and the Decca people thought they’d have some fun?

How much time have you got? We could be here a while.

I do give everyone in the film credit for talking about the philandering like adults even to the point where his one daughter became estranged because she questioned his behaviors. They certainly look at that head on.

Sadly anyone watching this movie would end up thinking that Pavarotti dedicated the end of his life to raising money for charity by singing with pop stars. You don’t have to listen to Bono talk a bunch of blarney about what a great human being and artist Pavarotti was in language that doesn’t even make sense when you string it together.

The reality is that this film doesn’t seem so much a documentary about a singer and his life and career as it is a puff piece protecting and extending a brand. Decca after all is just an arm of Universal Entertainment which owns Universal Studios and probably Howard’s soul to boot. Decca’s got a soundtrack to sell plus they released a box set of all of Pavarotti’s opera recordings (101 discs! not too far back.  (My birthday is coming up if anyone’s asking).

There was a story to tell here of an enormously talented man who was undoubtedly flawed in many ways. Howard could have told it with respect and humor but instead he made an amusement park ride that PBS will no doubt snap up the moment the rights come available for broadcast. It’ll be just like old times.