Words get in the way

Although stripped down, this comedy of manners was far from boring due to well-choreographed movements and actions of the characters. 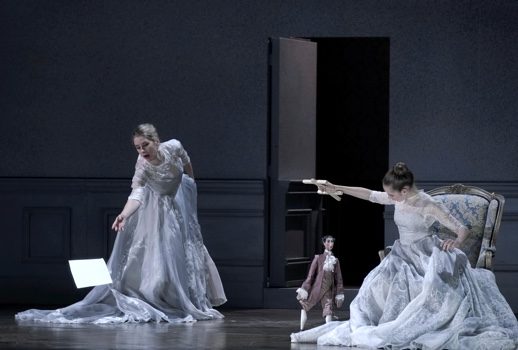 In war-heavy Munich late 1942, 70-something-year-old Richard Strauss expanded the theme of a little opera of Salieri (Prima la musica e poi le parole) into “A Conversation Piece of Music” as he premiered his final opera Capriccio, conducted by its librettist Clemens Krauss. Teatro Real waited for 70-something years to present the opera for the first time, as they did beautifully on May 27 in an exquisite production by Christof Loy.

Strauss had been toying with the idea of Salieri’s opera since the 1930s, first working on it with Stefan Zweig followed by Joseph Gregor, before finally collaborating with Krauss on the final libretto. Strauss himself aimed higher with it; in one of the letters to Krauss he mentioned that “I do not want to write just another opera. With this libretto I would like to do something unusual, a treatise on dramaturgy, a theatrical fugue.”

It seems obvious he wanted Capriccio to be his artistic testament (possibly anticipating that it would be his last).

Like Salieri’s, the chicken-and-egg issue of the importance of music and words is central to the story. Strauss and Krauss, however, broadened the issues with the relevancy of theater and dance, wrapped around the intricacies of love interests among the characters, particularly those of the Countess with both the Poet and the Musician (mirroring her preference to words and music).

On top of that, they threw in commentaries on social classes as well, resulting the whole opera served as a dissertation of opera making. Even worse, the acerbic tone of the opera seemed to suggest that Strauss and Krauss actually mocked the art form, confirming the general belief that opera world was snobbish and irrelevant!

There lies the problem of Capriccio; it was a piece intended to stimulate the mind rather than a spectacle for the eyes. Many believed that the opera was rather unstageable, particularly with its heavy emphasis on the texts. Strauss himself was fully aware of that; he told Krauss “Never forget that our Capriccio is no piece for the broad public, any more than it should be played in a big house where only a third of the text can be understood.”

The greatest strength of Loy’s production in my opinion was that he boldly chose not to adopt the opera-in-opera blueprint of how this opera was normally staged but to let the piece unfold as, simply, a series of conversations, where Strauss and Krauss’ words run supreme. Set in a single static stage (representing the Countess’ drawing room) without break, Loy kept the props to bare minimum and set the focus on the texts and interactions among the characters.

There was no string sextet nor La Roche’s theater on stage. In a way, his vision was the complete antithesis of Robert Carsen’s gorgeous production at Palais Garnier (touted as an ideal Capriccio by many) or the colorful Marco Arturo Marelli’s from Wiener Staatsoper. You can see a clip of the production in the trailer below:

Although stripped down, this comedy of manners was far from boring due to well-choreographed movements and actions of the characters, including the servants. Loy pointed up the social aspects of the opera by having all the servants dressed in uniforms (even wigs!), and they were running around addressing the needs of the Countess and her “entourage” and setting up furniture and other props. 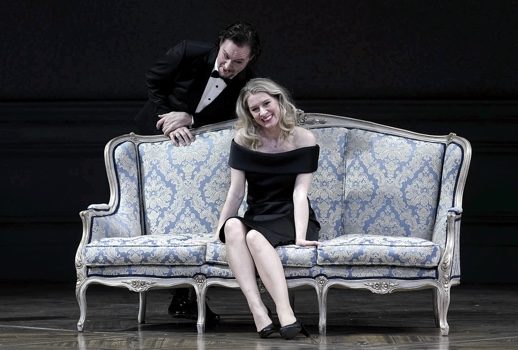 They also casually made hand or eye gestures when they heard specifically funny/sarcastic remarks uttered by the “upper-class” (there were many such moments in the libretto!). A lot of times Loy’s staging reminded me of the popular TV series Downton Abbey; the Major-Domo was pretty much Mr. Carson’s doppelganger and the servants’ scene was just another episode of Downton’s downstairs dinner!

The show also truly made the sonnet “Kein andres, das mir so im Herzen loht” shine through the opera. The sonnet, written by 16th century poet Pierre de Ronsard and translated into German by Hans Swarowsky, formed the heart and soul of Capriccio. It appeared in both spoken and sung forms done by multiple people, and the theme worked as leitmotif throughout (I even heard a person humming it on the way out)!

That said, Loy’s direction wasn’t completely free of quirkiness. As if the story wasn’t complex enough, he decided to frame the story with three generations of the Countess (the Young and Old Countess were silent roles), all dressed in the same white dress as seen in the pictures below. When the curtain opened, the Old Countess came into the empty room wandering and reminiscing; only after she left the characters of the opera started to appear.

Subsequently, the Young and Old Countess took turns to appear at the end of the opera. That fact, combined with Raimund Orfeo Voigt’s slightly decaying set, seemed to suggest that the whole thing happened in the Old Countess’ head, remembrance of her young carefree (and apparently amorous) days.

While in itself this was a fine idea, to me it somewhat marred the poignancy of the final scene; instead of anticipating the future (“Du Spiegelbild der verliebten Madeleine, kannst du mir raten, kannst du mir helfen den Schluss zu finden für ihre Oper? Gibt es einen, der nicht trivial ist?”), she had already known the answer as she had lived through it!

Nevertheless, this was truly a handsome production with lots of things done right. Klaus Bruns dressed the characters mostly in modern clothes, except for the Count during the La Roche’s rehearsal play and the servants during their laugh-out-loud scene. Special mention needed to be made for Franck Evin’s excellent lighting that highly nuanced and perfectly highlighted the actions on stage.

Teatro Real assembled a fine cast for this first performance. Swedish soprano Malin Byström made an impressive role debut as Countess Madeleine. An acclaimed Straussian (particularly as Salome), she felt at home with the role, completely at ease with the demands of the role.

Aligned with Loy’s direction, Byström’s take on the character was much less than the customary glamorous diva. In her hand, the Countess was a young lady in love, and she flirted vivaciously with both Flamand and Olivier; she was more of Lady Mary Crowley (to get back on the Downton Abbey analogy) than the Feldmarschallin.

Vocally she was on point, producing Strauss’s conversational lines with great timing and acting, culminating with the final monologue “Morgen mittag um elf!”. That dramatic scene – where Strauss himself reportedly commented “I have never composed anything more beautiful” after the first performance – was delivered with less sense of finality than in other interpretations, but instead it was imbued a glimmer of hope, matching Loy’s vision.

The production was also fortunate to have Christof Fischesser cast as theater director La Roche. With his big booming bass voice, the role – modeled after Max Reinhardt, who directed Ariadne aux Naxosand was its dedicatee – was performed with great comic timing right from the start.

La Roche, too, had a long monologue “Holà! Ihr Streiter in Apoll!”, a lengthy manifesto on the importance of theater.  Fischesser skillfully and authoritatively turned that into a showstopper without being pompous, a very impressive achievement indeed! It proved to be the highlight of the night, right next to the Countess’ final monologue.

As the suitors, tenor Norman Reinhardt and baritone André Schuen assumed the roles of the Musician (Flamand) and the Poet (Olivier) respectively. Reinhardt had a bright lyrical voice that while gorgeous, it got drown by the orchestra at the loudest points. Nevertheless, Reinhardt and Schuen’s voices contrasted and complemented each other nicely, and their interactions with the Countess was suitably funny and amorous.

Josef Wagner’s Count seemed to be Baron Ochs auf Lerchenau’s long-lost cousin, without his misogyny. It was a rather thankless role despite the name, and Wagner filled it with all sorts of antics including being dressed in 18th century coat and jabot when performed Olivier’s play.

Nevertheless, he did perform it with aplomb and it was fun to watch! So did Theresa Kronthaler as Clairon, in a performance that was graced with the necessary style and sass. All other comprimario roles were handled sufficiently.

Conductor Asher Fisch led the Orquesta Sinfónica de Madrid in a direct, exciting manner, masterfully navigating the ebbs and flows of Strauss’ score. It was rather jarring for me to hear the sextet coming from the pit rather than on stage, and it also took me a while to adjust the transition to Strauss’ full orchestration.

Nevertheless, Fisch fully took control of the proceeding of the night; for example, at Scene 9 (that culminated in La Roche’s monologue), where he moved the music with Rossinian pace while the hijinks on stage got more and more elaborate.

It was truly an auspicious first performance for Capriccio at Teatro Real, marked with great singing, conducting and staging. The audience seemed to really enjoy it, and the largest applauses were reserved for Byström, Fischesser and Fisch. Hopefully based on the success of this, Teatro Real will consider more less-known Strauss’ operas in the future!