Paris in the springtime

La Traviata offered a cast of fresh debutantes and an uncommonly strong musical performance that could hardly be bettered. 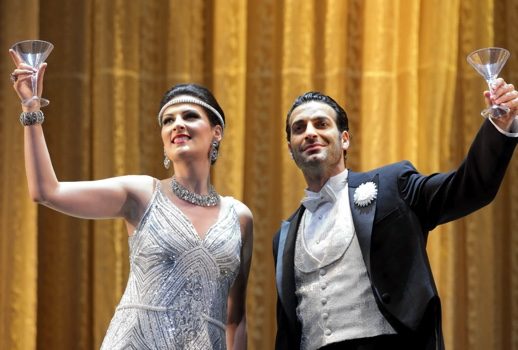 I read somewhere that Giuseppe Verdi’s  La Traviata is currently the most performed,  ergo most popular, opera in the world today. It bodes well for the art form that something as musically complex is ranked as number one although I’m certain more than a few sopranos have had a say in it as well. It’s so popular, in fact that Los Angeles Opera actually boasts two productions of Verdi’s three-hanky weeper.

One is traditional, set in the Paris of Verdi’s era, and another updates the tale of the consumptive courtesan to the 1920’s.  It is with the latter that the company is closing its season downtown at the Dorothy Chandler Pavilion and Saturday night’s opening was surely a memorable performance but for some of the wrong reasons.

This now thrice mounted production may be 12 years old but it brought with it a cast of fresh debutantes and an uncommonly strong musical performance that could hardly be bettered.

After a mimed staging of the prelude (a description of which I will spare you all) the curtain rose on a very chic salon of 1920’s epoch and our soprano entered in a vintage Rolls Royce Phantom stage right to the applause of Flora’s party. It suddenly occurred to me what a splendid idea this updating was. Verdi himself wanted his opera performed in contemporary costume and setting just as the play his opera was based on La Dame aux camelias had been.

I had visions of Jean Harlow, the blonde bombshell from Dinner at Eight, and her own tragic death at an early age swathed in an Erté-esque glamour. Sadly the comparisons ended there.

Adela Zaharia gave us her first Violetta and she debuted here just last year as Gilda in the second cast of Rigoletto opposite Michael Fabiano and Ambrogio Maestri.

The Romanian soprano was just fresh from her Operalia win and she has been singing professionally for nine years. So with a lyric-coloratura voice this supple and strong and a list of ‘-ina’ roles on her curriculum vitae it’s high time for her to graduate to Violetta and I can say unequivocally that she is a singer of great promise and more than a little artistry.

She began the evening with a bit of a flutter in the sound and, like so many other Violetta’s I’ve heard before, really didn’t gain her footing until the high coloratura passages in the duet with Alfredo after the “Libiamo.” From that point on however she grew in both vocal brilliance and gleaming tone as the evening progressed.

If she continues with this role there’s no doubt she can become one of its finer exponents. Curiously it is just that strength that she will have to learn to temper in order to find the best in her characterization. While she is most certainly a beautiful woman with a lovely voice she has yet to touch, what the Italians call, the morbidezza (softness) that underlines nearly everything that Violetta does.

The character is a dying woman from the curtain rise and her every action should somehow imply this as well as show her trying to mask it from her friends. When she summons all of her courage in the interview with her lover’s father in the second act her sacrifice should break our hearts. The audience rang down well-deserved cheers for Ms. Zaharia’s performance but, from what I saw, all eyes were dry.

Her Alfredo, Rame Lahaj, also debuting with LA Opera hails from Kosovo and walked away from the Operalia competition with top honors the year prior to Ms. Zaharia,  He is tall, handsome, and has an exceptionally well-trained lyric tenor verging just a bit on the spinto.

His Italian diction was exceptional in a cast that could have been well understood without supertitles. He was fervent in his delivery all evening and, rare among tenors, not afraid to sing softly, not even afraid to continue to sing softly when he’s not being matched by his colleagues.

Also debuting with LA Opera after winning honors at Operalia in 2004 is baritone Vitaliy Bilyy as Giorgio Germont. He displayed a sizeable, if gray-ish, voice that was sturdy when you wanted poetic. He was stern with Violetta in the great Act II confrontation but reached for little else.

His “Di  Provenza” was capped with what might have been the loudest single note I’ve ever heard from a baritone. I’m not certain that was what Verdi was looking for however. Still a lack of audibility problems is a blessing from any baritone most especially in the ensemble at the finale of Act II.

Marta Domingo, matriarch of the dynasty, directed and designed this production and it’s equal parts beautiful and wrong-headed. Act II Scene I finds us in lovely autumnal forest rendered a la Gustav Klimt. As the baritone launched into, “Pura siccome un angelo,”  leaves fell picturesquely from above. Magically they also fell at the opening bars of the soprano’s “Dite alla giovine” and were loosened by the winds one final time for “Di Provenza.” I leave it to the reader to decide at which repetition the effect turned into kitsch.

The scene at Flora’s party boasted a Dixieland band on an upper balcony, ebony walls with silver edging and a mirror ball. A group of gold-clad flappers (straight out of Ken Russell’s The Boyfriend) gyrated during the ballet to the truly inspired choreography of Kitty McNamee. Alfredo brought Violetta up onto the large gaming table center stage for her public shaming, and, although it made a pretty stage picture, the motivation was lacking and the blocking ungainly.

Act III found Violetta on the magnificent round Art Deco bed we first saw in Act I but with nothing surrounding her but the night sky. Either she’s sold all her possessions (including walls) or production expenses had been exceeded. Oh and it was snowing so you know that tuberculosis is going to be kicking into high gear at any moment. The staging here had Ms. Zaharia hit the floor so many times I’m surprised she didn’t chip a tooth.

The costumes were mostly excellent with the exception of Ms. Zaharia’s Violetta. After a stunning Act I ensemble where she was covered in white and silver sequins head to foot with tiara and jewels she changed, with the help of her maid, into a fringed dressing wrap that was the exact color of the draperies behind her.

The saving grace in all of this is Maestro James Conlon and the excellent Chorus and Orchestra of LA Opera.

Absolutely stunning work from the chorus which numbered 40 but sounded like 100. Their Chorus Director Grant Gershon has them observing all of composer’s dynamics and markings and I’ve never been so impressed with their work as when I’ve heard them sing Verdi over the past couple seasons.

The work Conlon does with the orchestra continues to be the glory of the company. His constant propulsiveness and perfectly judged tempos and how well they relate to one another. If he errs anywhere it’s on the side of being a good accompanist. The downbeats in the string section all night long were so terrific and muscular and he has a preternatural sense of keeping the balance between pit and stage.

One such moment was with Violetta’s “Amami, Alfredo,” where he cushioned and supported Ms. Zaharia while never bringing the orchestra too far down or, conversely, swamping her. That said he didn’t take the ritard on the three big phrases for Violetta in the gambling scene.

I’m sure Verdi didn’t write them but I love it when you’ve got a soprano who can stretch those out to infinity.  As to the musical edition, the tenor got to keep ‘O mio rimorso’ but Violetta lost the repeat on, ‘Addio del passato’.  Standard I’d say. Oh and Ms. Zaharia has an E-flat waiting for you.

Oddly we had cast calls after every act like we were Live from the Met back in 1982. I can understand the solo bow that’s common after Act I for Violetta but I hate to say the rest looked a little provincial.

So a cast of strong, youthful, singers who are technically secure but lack nuance and don’t know what to do with their hands most of the time. A production that can’t decide whether it’s realistic or full blown Tegietheatre buoyed by a top notch musical presentation. Five performances left and Ms. Zaharia gets a new Alfredo and Germont, Charles Castronovo and Igor Golovatenko, for the last three.