All I mask of you

Amore Opera, an old-fashioned, adventurous little company that performs ambitious and sometimes delectably obscure but worthy repertory at the Riverside Theatre, is now (through Sunday) presenting Un ballo in maschera. 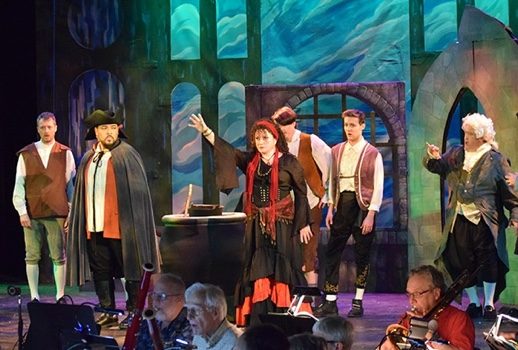 Un ballo in maschera, premiered in Rome in 1859, was an immediate and enduring hit, Verdi’s greatest success in the decades between La traviata and Aida.

Alone among his mature scores (except Falstaff), Verdi never tinkered with this one, cutting or revising—the balances, the character touches, were left as they were, and the coincidence-ridden melodrama had audiences on the edge of their seats.

Nor did Ballo fade from the scene or require resurrection and apology in modern times: It hung on. The score sets the the gavottes of a brilliant court against the lurking shadows of conspiracy, adultery, even Satan witchcraft. The conflicts keep us attent as the twisty story unwinds. Of course it works—the same tale had done for three or four previous operas. .

Since we all know the piece from the grandiose spectacles of the “legitimate stage,” what can the forces of a less professional company bring to bear that make the experience as immediate, as much of an operatic thrill before our jaded palates? One of my standards for a good opera is: Would it work without all the upscale froufrou? Would it work with low-budget and decent musicians?

The best operas do not require De Mille sets. But when such an opera is familiar to us from the grandest stages, what pleasures does it still provide at the hands—and throats—of less exalted musicians?

Amore Opera, an old-fashioned, adventurous little company that performs ambitious and sometimes delectably obscure but worthy repertory at the Riverside Theatre, is now (through Sunday) presenting Ballo in repertory with an all-kids’ production of Gilbert & Sullivan’s Iolanthe.

Amore deploys a small band that balances Verdi’s atmospheric plucked strings and intertwined low winds very nicely, though the crashing shocks of Gallows Hill and Ulrica’s Satanic invocation were a bit ragged on opening night. They also haven’t a tuba, and therefore omit the descending tuba slur after the assassination itself, the vendetta in domino—but I’ve always felt Verdi overdid himself with that one, and was grateful not to hear it.

Douglas Martin was the vigorous conductor, the sort of maestro always in visual contact with his singers and solo instrumentalists.

The singers I heard (all the leads were double- or even quadruple-cast among several performances) were able practitioners, but there were sometimes vague or inaudible notes at either end of the scale that suggest why they have not been heard of.

Ballo requires five leads plus several important comprimarios. The opening night tenor as Gustavus (always addressed, however, as Riccardo), Todd Wilender possesses a brash, trumpeting tenor and the outgoing personality for Gustav/Riccardo’s show-off jollity, so that one is inclined to pardon the nasality that creeps in when he soars to high notes.

One felt a little less indulgent of his apparent unfamiliarity with the part—the company was obliged to make use of a rather loud prompter, who was all too clearly offering his lines, the others being reliably off book.

On opening night, the star was Alexis Cregger, whose creamy soprano, a beautiful instrument of genuine Verdi weight, was full-bodied and on pitch from top to bottom. Amelia is a curious role—the first heroine Verdi composed who does not require flights of coloratura to express her personality.

Indeed, the librettist’s suggestion that (as convention called for), he write her a solo scene to present her amorous dilemma (this would have called for a high-flying cabaletta), was tossed aside by the impatient composer. We first meet Amelia in the trio in Ulrica’s cave, where her theme of fatal love rings out and gives us a very clear portrait of her.

The next two acts each commence with a solo aria for her (without coloratura!), and we know exactly who she is, how she regrets her more passionate feelings. (Not to send anyone home unhappy, Verdi saves the frills for another character, Oscar.)

Cregger’s sound is so polished and beautifully produced that we were delighted to follow it through all the contortions of the second act, when she does not leave the stage, while handling ghosts, her lover, her husband and the entire conspiratorial chorus.

Jay Stephenson’s dignity as Renato/Ankarstrom, her betrayed husband, made an excellent foil for the merriment of Wilender’s Riccardo/Gustav. Stephenson’s baritone has a pleasing grainy quality middle voice, perfect for the the jealous temper that devours him during “Eri tu, in the latter half of the opera. But the extremes of the range, the very lowest notes and the highest, were clearly a strain for him and his acting rather on the stiff side.

Oscar, the adolescent page (the only time Verdi ever resorted to this Parisian cliché—but it’s a Parisian libretto), who sings all the filigree that Amelia evades, was performed by Allegra Durante, with the just the right degree of spunky this-isn’t-serious twinkle, but a fine soaring line for those few moments (mostly chez Ulrica) when the boy realizes that life can be serious indeed.

She got slightly lost in the conspirators’ quintet, but that’s a startling piece, with all the self-absorbed plotting in the minor except for oblivious, major-key Oscar.

The supernatural element (is Ulrica a serious devotee of the Dark Powers or just a society fraud? The argument continues) was take by Debra Patchell, with an impressive growl and a swift transformation to urgent whisper when she realizes there are more plots that one working out in this scene.

Jay Gould and Charles Gray portrayed the far from bold, far from determined murderous politicians lurking in the corner, Federico Campisaro looked uncomfortable as a judge well might at so suave a court, and Muir Ingliss, a baritone of some promise, played the lucky sailor who just happens to barge into Ulrica’s card parlor when the disguised king is in the mood to write surprise promotions.

Susan Morton’s chorus lurked and lurched with enthusiasm, under the well-traffic-directed supervision of Nathan Hull’s stage direction. Richard Cenillo’s sets made an impressive effect whenever palatial rooms were called for and Robin Porter Van Sue had the usual trouble all opera companies who deal with the 18th century seem to have these days in persuading the proper characters to wear wigs or masks when the stage direction strongly implies they should.

Close up to the unmic’d voices and hearing the elegant wit of Verdi surge through such abbreviated orchestration is a great pleasure to show us just how brilliantly the composer anticipated the less than luxe circumstances his masterpieces were bound to face as they circled the world.

The young and enlightened Gustavus III of Sweden remarked, in 1776, how much he admired the rebellious American colonists. “If I had not been who I am, I would go to America to follow the emergence of this new republic.” But becoming governor of Boston was surely the last thing he expected. Of course, he’d been dead 67 years by the time Verdi promoted him to that office.

Gustavus’s assassination was one of the most shocking events of its time. At midnight on the 16th of March, 1792, at a costume ball in his new opera house, the king was surrounded and shot by masked conspirators. He died two weeks later.

The murder seemed so extreme in site and scope that it’s amazing no opera was based on it for 40 years, but the French Revolution distracted people’s attention—too, current events were not usually the meet of opera in those days, and they filled the censors with alarm.

Too, in this particular event, there was no role for a prima donna—the event was political; only males participated. You could have a play without a leading lady, but an opera? The solution was found by Eugène Scribe, author of dozens of plays, librettos and ballet scenarios. He relied on the principle of “cherchez la femme.”

No femme involved? Invent one! Give the assassin a wife and make the king her lover; then the assassin had a motive without tiresome political debate. It was sure-fire!

Scribe’s Gustave III, ou le bal masqué was offered to Rossini in the wake of Guillaume Tell, but he had retired from composition. Instead, it was set by Scribe’s frequent partner, D.F.E. Auber, in 1833. The libretto was translated into Italian by Cammarano for Saverio Mercadante, but the prejudice against royal murder demoted Gustavus to earl of Moray in Il Reggente.

You can’t keep a good opera plot down, however. Verdi chose it for Ballo in 1859, though the nervous political situation (there had been an attempt on the life of Napoleon III at the Paris Opéra—and guess what was playing that night?) once again obliged a demotion: the king now became Governor of Boston. Swedish noblemen were dispossessed Indian chiefs. The aristocratic sibyl became a Creole waterfront witch.

Opera Amore, with its Swedish coats of arms and king dressed as Riccardo paid as much attention to all this detail as most audiences do.