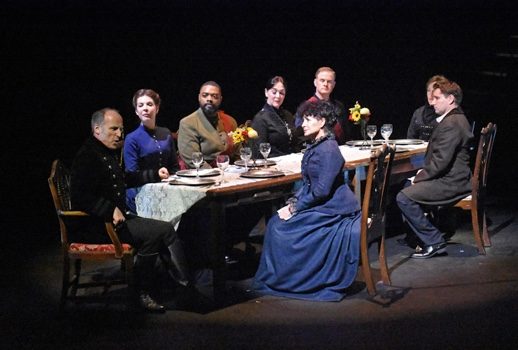 Britten’s penultimate opera, the anti-war ghost story Owen Wingrave, was composed for television performance in 1971, and the cast of that original staging was a golden book of the great Britten singers of his times: Janet Baker, Heather Harper, Peter Pears,John Shirley-Quirk, Benjamin Luxon.

The opera has since had several stage productions and is now (Thursday-Sunday) enjoying a New York première courtesy of Little Opera Theater of New York, at the Gelsey Kirkland Theater in DUMBO.

Curiously enough, Lord Britten had never owned a television set at the time and had to rent one to watch the premiere. Decca subsequently gave him one but he seldom turned it on. Maybe if the BBC had done more Henry James.

The story’s themes include two of Britten’s lifelong obsessions: pacifism and the destruction of childlike innocence. As in Peter Grimes, Billy Budd and Gloriana, death is somehow demanded by a background of mindless public opinion rather than by individual resolve. Owen is the scion of a family of soldiers, where the men are warlike (often, like his father, fatally so) and the women are equally fixated on duty and bloodshed.

However, after studying for military academy, the promising youth decides that warfare sickens him with its waste and pointless violence. His grandfather, the general, disowns him, his aunt and his girlfriend despise him. “Scruples,” they sing at him, in mutters of disgust.

The story was derived, like Turn of the Screw, from one of Henry James’s arch, ambiguous ghost stories. Is there a malicious ghost in the house, or does the malignant spirit of the dynasty itself—an incarnation of the soldierly Wingraves—slay the hero?

The house, by the by, is named Paramore, in which James is too subtle for me. His symbolism is perfectly obvious in the surname, Wingrave. Perhaps the house is a cruel Paramore to complement Kate, Owen’s love, a “brute” (someone calls her) who taunts him to prove his manhood by sleeping in the haunted chamber.

But the psychological detail that makes Turn of the Screw such tense, thrilling theater does not impress us in Wingrave—not in the story or in the libretto or in the music. We do not doubt the point the creators, Britten and Myfanwy Piper, wished to make of the waste of youth and the weight of military tradition—but the tale does not reach an appropriate climax.

There is a scream and a corpse. No flaw of the hero’s makes the death necessary or true in the tragic sense. Owen is too weak, in yielding to Kate’s dare, and he seems far too strong to die of fright.

The Little Opera Theater of New York did an exceptional job of giving the work its opportunity. An orchestra of 18, led by Richard Cordova, made us marvel at delicate touches, combinations of instruments to comment upon or underline statements in the libretto, themes and strokes of character or conversation. The singers’ voices were solid and generally comprehensible, despite the absence of supertitles: the diction coach deserves a hand.

The director, Philip Shneidman, had his work cut out for him, in a theater, to transpose the closeup work, the movement from internal reflection to general conversation that intrigued Britten and Piper in creating the piece for TV. In Josh Smith’s set, the stage is a square box with four ominous black doors and a rising staircase.

The doors permit entrances to seem formal, and Alex Basco Koch’s projections change the location of the action: from the classroom where Owen is “cramming” for officer’s candidate school to the windowed and wainscoted Paramore to the formal dining room where Act I comes to a climax at the dinner table—at once a “concertato” in the style of old opera and its modern avatar.

Individuals get a moment of reflection and then the three ladies of Paramore chime in oppressively, like Fates. (The comparison is Britten’s own.) The moments of internal thought in this scene were intended for TV closeups, but the singers do an exceptional job of differentiating what is thought versus what is said in public.

There is also a portrait gallery, ten (projected) pictures of British soldiers through the ages, who haunt Owen a bit like Gilbert and Sullivan’s Murgatroyds in Ruddigore. But these portraits do not come to life—or do they?

Laura de Bruijn’s costumes are almost all black in Act I—everyone in the house but Owen appears to be in high Victorian mourning. They are in white nightshirts for Act II, though upper class Brits at a house party would surely have dressing gowns. Perhaps we are supposed to see a formal rigidity in the first act that leads to open hostility in Act II. Rigid corsets enhance the story’s claustrophobia.

On opening night, Thursday, Owen was sung by Robert Balonek, a sturdy and distinguished baritone to whom the tessitura and Britten’s curious lines made no difficulty at all. He seemed immovable as Gibraltar. On the original telecast, Owen seemed a little weak, undercut, stubborn rather than convinced in his defiance. Even when Balonek was conspicuously not the only character in uniform or in black, he anchored the drama. He went to an incomprehensible fate, but he went there with vocal banners flying.

They replace, in a sense, the function of a chorus in Britten’s grander operas, and in Britten the chorus is never only skilled, it is also an active participant in the drama. The three voices were perhaps too similar in rich treble inflection.

Matthew Curran sang Spencer Coyle, Owen’s sympathetic tutor, with a warm, reliable bass, and Bernard Holcomb, as an amiable soldier-student, sang with the proper brazen brainless enthusiasm. The character is one who has never had to think and is in awe of those who can. His thoughtless bravery contrasts with Owen’s pensive doubts.

Janice Hall, as Mrs. Coyle, almost the only character to express sympathy for what Owen may be going through and the only one to admit fear of the family ghost, is some relief from the wall of female condemnation. Hall found it easy to sing the gentler lines without the inflexible certainty that gives away the others.

Rufus Müller drew the Peter Pears role of Sir Philip, Owen’s officer grandfather. The ladies may condemn the boy, but it is the patriarch who expels him from the tribe. The part is softened somewhat by giving Müller the tenor role of the Ballad Singer who opens Act II with a family legend about the murder of a Wingrave boy by his father, infuriated by his refusal to fight with another boy.

The ballad is a clever touch on Piper’s part—it sets up the ghost room scenario at the beginning of the second act, just when we need it. If it came during Act I, it would be intrusive. Müller manages to blow hard (from the wings) as the furious general and then demonstrate his fine lyric gift in the ballad.