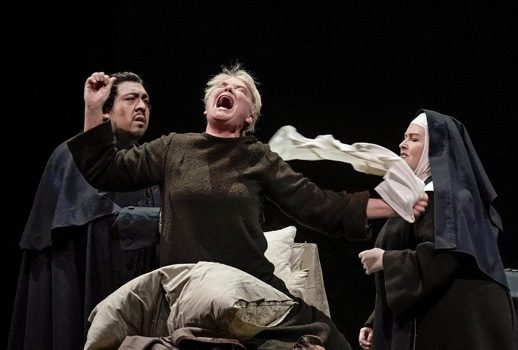 It was quite a pleasure—a privilege, really—to see John Dexter’s legendary production of Poulenc’s Dialogues des Carmélites last night at the Metropolitan Opera. In light of the parade of tiresome, soft-minded ideas that have become de rigueur at the house, Dexter’s razor-sharp direction is a reminder of how imagination and creativity still trump extravagance.

After more than 40 years, his vision has aged very well. Austere, stark, seething—it goes down like shot of top-shelf vodka.

She runs from her chaotic, increasingly dangerous environment by joining the Carmelite orders at a convent in Compiègne. While her motivations are suspect, the prioress Madame de Croissy allows her to enter the convent as a novice.

Though she may have sought out the convent as a way to avoid fear and suffering, it is within this sphere that she must confront her destiny. A Jonah figure, Blanche cannot avoid being swallowed by the Leviathan (pun on Hobbes intended). Overwhelming forces will spit her out where she belongs, even if that means washing ashore on the scaffold of the guillotine. 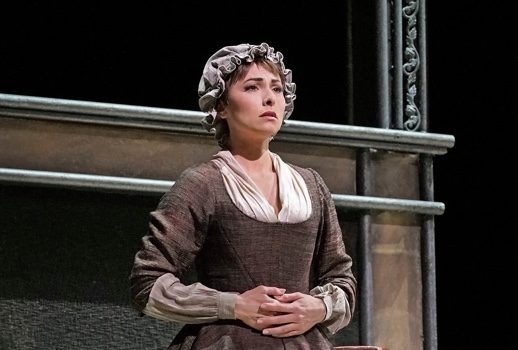 The plot of Dialogues is mostly philosophical. The libretto, by the composer, maintains a rigorous focus on “talk” of faith and fear. These conversations unfold within a mounting atmosphere of dread and hysteria.

As the revolution kicks into high gear, frothing into a reign of terror, the consequences of faith and devotion become direr. As the vengeful revolutionary mobs come pounding on the gates of the convent, the Carmelite sisters must each, in their own way, decide how far their faith will take them.

Dexter’s seamless production moves like a fever dream. Darkly lit on a raked stage, he pares down the sets and costumes to their most basic elements. A forced perspective suffuses the proceedings with an element of the surreal. And a skeletal, transitory architecture invokes shifts in setting with the most minimal of gestures.

At last night’s performance, Isabel Leonard returned to the role of Blanche de la Force with justified confidence. Her singing was well produced and exceptionally beautiful. And her naturally detached demeanor—which, in other roles, can be icy and unappealing—worked in her favor. It allowed her character to walk a fine line between nervous hysteria and otherworldly vision. 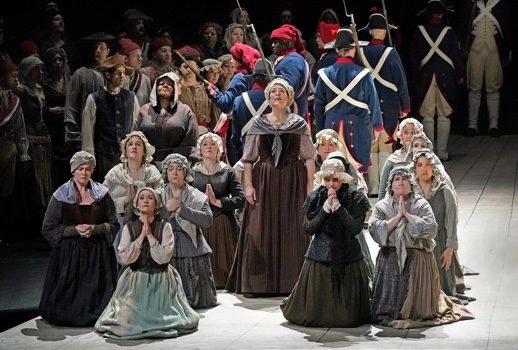 As the loquacious, yet prophetic Constance, Erin Morley was characteristically adept. Her crackerjack singing was clear, focused, and dexterous. And her sweet, cherubic face beamed with endearing innocence. She was very good.

But the highlight of the evening, as everyone should have expected, was the shattering Karita Mattila, who commanded the stage as Madame de Croissy. A woman in physical and spiritual crisis, she raged, shook and keened on her small deathbed with terrible realism.

Mattila has always been adept at physically dramatic work, and this particular role was no exception. Here, she displayed a profound knowledge of suffering and spirituality, delivering one of the most compelling performances I’ve seen at the house.

Karen Cargill’s Mother Marie was a steady stream of vocal excellence. She possesses a sizeable voice with a laser focus. In contrast, Adrianne Pieczonka was slightly disappointing as Madame Lidoine, with a soprano that sounded tinny and uncultivated—strident, when it should have been sumptuous and comforting.

And Yannick Nézet-Séguin completed his inaugural season in fine form, conducting a Met orchestra that evinced all the colors and allusions of Poulenc’s masterful score. After all the drama attending his predecessor’s departure, Nézet-Séguin remains the house’s great hope. Salve Regina, indeed.

The succinct combination of these performances with a production of the highest caliber made for a compelling evening at the opera. A rare event, as of late. It would be nice if the company arranged a field trip for its current stable of directors (in particular, Michael Grandage, Mary Zimmerman, Michael Mayer) to view the performance as a master class in creativity.

As for the rest of us: let us cherish this staging for as long as we have it (only two more performances!) Such good fortune probably won’t last long.  Any day now, a gaggle of witless revolutionaries will take hold and send this production to the Guillotine.