We are the elusive, the mysterious, the ever-courted Millennial Audience, Mr. Darcy to the marketing department’s Mrs. Bennet. 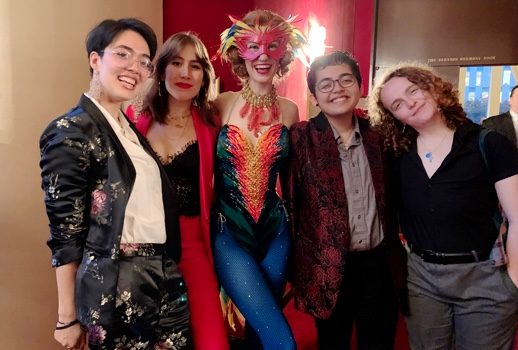 This Friday, I took my friends to the opera.

This is not at all a rare occurrence for me. For the past two years, I have taken friends to the opera at a rate that has ranged from “once a month” to “three times in one week.” The reasons are many: we are students, and student tickets at the Met are an easy-to-impulse-buy $35 for orchestra seats; we are gay people, and we love to dress up; and, crucially, I love opera, and I don’t have a ton else going on socially.

What I have learned from my travels through the Met is that my friends and I seem to represent key figures in the Met’s ongoing psychic drama of self-representation—we are the elusive, the mysterious, the ever-courted Millennial Audience, Mr. Darcy to the marketing department’s Mrs. Bennet, and they’re gonna lock us down with one of their daughters or die trying.

The Met’s plans to woo the youth, in fact, bear a striking similarity to tactics of a 19th century mother blessed with daughters — they invite us to a season’s worth of parties, and hope that we happen to fall in love while we’re there. On Friday, I put the Met’s millennial matchmaking to the test, bringing a crew of two total opera newbies and one casual opera fan along to a delightful, Vegas-themed Fridays Under 40 party for Rigoletto. 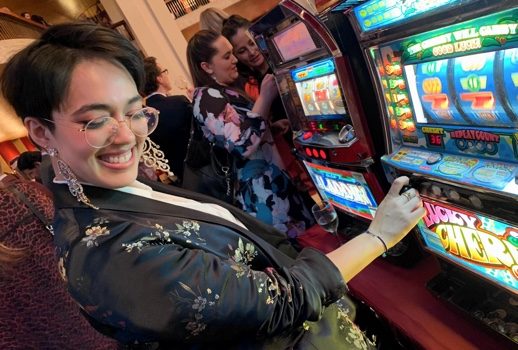 Your humble reviewer, failing repeatedly on the slot machine.

The Met Fridays Under 40 series has two draws: first, there are the discounted ticket prices, by which any audience member aged 40 and under can score $80 Orchestra/$60 Grand Tier seats to any Friday performance for the whole season; second, there are the parties, pre-performance shindigs on select Fridays that take the ticket prices up by $20 ($100 Orchestra/$80 Grand Tier) and offer production-specific themes, activities, and programming, plus free wine and cheese.

These events are distinct from the similar-in-concept student pre-performance parties by the price tag (the student events cost the same $35 as any other student ticket) and the wine, of which the students only get one glass each.

The Met’s Facebook page promotes the Fridays Under 40 events with photographs of stylish young people (taken by Rose Callahan of Met style diary “Last Night at the Met”, which if you are not following on instagram you are seriouslymissing out) and the promise of a “fabulous, fun, and Instagram-worthy” “night out in the Big Apple.”

I cite the phrasing of these posts not to turn my nose up at the notion of attracting young people to the opera by promising them the opportunity to be seen at their most fabulous, as seeing and being seen has been part of opera-going culture as long as there has been opera-going culture, but rather because I think it sets up precisely the tone of the event: stylish, playful, definitely unhip but too heartfelt to be uncool.

My fun, fabulous, Instagram-worthy crew comprises myself, Asya, who describes herself as “a casual opera fan,” and who has attended many Met productions with me before, Aydan, who has seen one opera before (The Magic Flute, in London), and Tom, entirely new to opera.

When we arrive, at quarter to 7, the bar space under the Chagall is pretty full, but Dan (the Met’s Education Manager, and a familiar face from the many student pre-performance parties I have attended) tells us that the Eleanor Belmont Room has, as he calls it, “wine with no line,” so we head in there. The Belmont Room has a sign that it’s only open to Guild members and donors, so we feel like big shots just walking in.

Big shots are definitely what the Met wants us to feel like, because in concordance with Michael Mayer’s trusty Las Vegas Rigoletto, the Belmont Room and the bar under the Chagall are decked out with roulette, blackjack tables, and slot machines.

A little scandalized, I ask Dan if we’re gambling for real money, and he reassures me that it’s basically Chuck E. Cheese tokens. After a fortifying snack of wine, cheese, and grapes in the Belmont Room, we wander out to try our luck gambling and people watching. 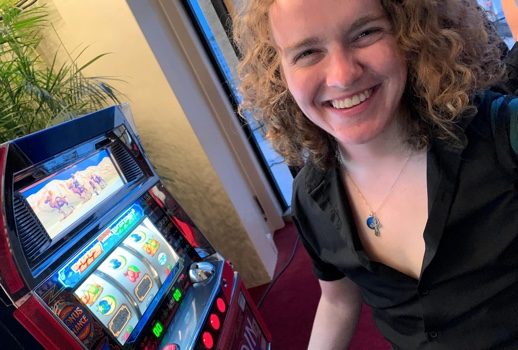 Tom on his Rigoletto experience: “Before this I thought Sylvia was the only person who attended the opera. Now I know that at least three or four more people attend the opera in addition to Sylvia.”

We very quickly learn that we are not particularly good at gambling, with the exception of Asya, who can apparently play the slot machines like a goddamn concert pianist. The people watching is easier.

Coming in I had a lot of questions about what the party-going vibe would be. $80, while much cheaper than standard Met ticket prices, is still a pretty steep going rate, certainly steeper than I, personally, would drop on the umpteenth go-round of Vegas Rigoletto.

Sure enough, the crowd is mostly young professional types in their mid-thirties. We are not the only group of young queers in colorful blazers, but for every peacocking Fellow Traveler in attendance there is definitely a badly dressed straight couple as well. 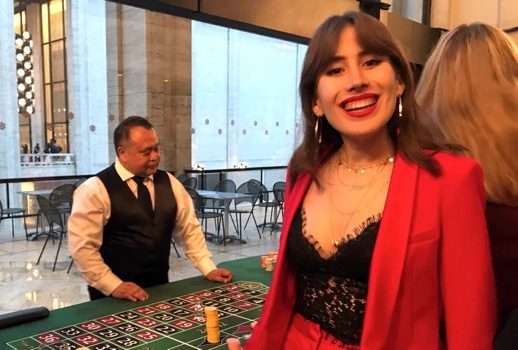 Asya, buoyed by her slots dominance, prepares to bet it all on number 11.

When I asked Aydan “if this event was a member of One Direction, which member of One Direction would it be?” their answer was “I think it’s posturing Harry Styles (for the gays) but fundamentally is Liam Payne (doing fine and conventionally good looking, but named his son Bear).” I don’t know what that means either.

All in all, the pre-show party is kitschy and fun—I ask my guests to throw me some representative adjectives and get back “swanky,” “playful,” and “spirited.” If only Mayer’s Rigoletto could borrow some of the party’s un-self-serious charm!

The standout for all of us is Rosa Feola’s Gilda, whose voice is beautifully expressive, irresistible to the opera-lovers and newbies among us alike. Feola’s characterization of Gilda is compellingly three-dimensional, an impressive feat given the constraints placed upon her by a production that has a lot of set design but, as Asya puts it, “no real blocking or traceable thought.”

The show’s problem I feel sure, is not the Vegas theme itself, but the way it seems, having found its concept, to call it quits immediately, leaving the singers to carry the burden of presenting an interpretation of the opera all on their own. We all like, for example, Matthew Polenzani as the Duke, because he’s a little bumbling instead of purely mustache-twirling evil, a characterization fully fleshed out by his every gesture and augmented by a gorgeous vocal performance.

We all fall in love with Feola’s vulnerability, her indecision and anguish as she gets in over her head. That’s in a production where everyone is hemmed in at all times by platforms, set-pieces, grates—imagine what singing actors like these could do in a show with any interpretive throughline, on a stage with any space to move around?

The biggest obstacle of all is the awful modernized Vegas-themed supertitles, the worst sort of un-fun cheesy and terribly distracting, both to those of us who had seen Rigolettobefore and those of us who hadn’t. Worse than distracting—the supertitles are condescending, implying that we can’t do the audience’s work of mental translation between libretto and staging concept.

A lot of digital ink seems to get spilled these days around the fear that young people will never learn to love opera. As a young person myself, and having just taken some young people to the Met on Friday, what is clear to me is that young people are perfectly capable of encountering opera and liking it on its own merits, with absolute no clunky translated libretto necessary.

In this context, a program like the Met’s Fridays Under 40 parties is successful not only as a delightful way to pass an hour or so before the curtain comes up; its success is also simply in getting young people in the door, in communicating to 20 year olds and 30 year olds that the Met is a playful space, an adventurous space, even a space for a gamble. Once they’ve done that, well. I defy anyone to hear Rosa Feola sing “Caro nome” and not fall in love.