Pigment of the imagination 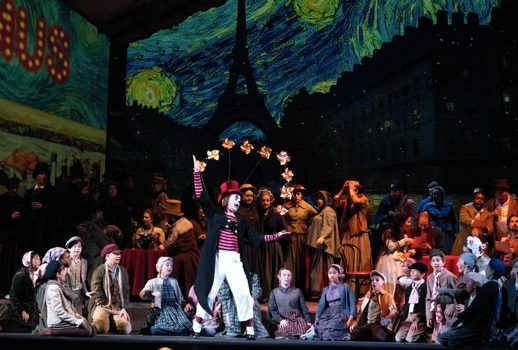 With the coming of spring, both sides of my professional life—as a critic and a college administrator/teacher—get busier. The former sees an uptick with last shows of the season; the latter means preparation for graduation. In both cases, it’s a time of endings and beginnings; also, as they say in Fiddler on the Roof, laden with happiness and tears.

Opera Philadelphia brought its year to a close with that perennial favorite, La Bohème, a work in which the happiness and tears are, of course, hard-wired.

Vasquez has a wonderful sense of inner life and morbidezza, inhabiting the character fully. Her expansive phrasing is a special highlight—conductor Corrado Rovaris, who often favors brisk tempos, clearly knows it, too, giving her room to shine in both her arias. Vasquez reminded me by turns of Mirella Freni and Diana Soviero—in this role, there’s no higher praise.

Johnson’s meltingly lovely lyric tenor won the crowd’s heart immediately—the tone is so fresh and plangent. He negotiated every difficulty with ease and met the role’s considerable demands with immaculate style and taste. Together, Johnson and Vasquez were a deeply moving central couple.

Robillard has the crystalline vocal sparkle one traditionally associates with soubrette parts, but there’s a wonderfully complex and serious personality underneath that adds unusual dimensionality.

For these three in particular—but also Troy Cook (excellent as Marcello), Will Liverman (a fine Schaunard) and Peixin Chen (a sonorous Colline)—Opera Philadelphia’s Bohème hit an exceptionally high musical standard. Rovaris conducted with his customary vivacity, and orchestra and chorus also delivered the goods.

Which makes it all the more frustrating that these fine artists were saddled with a misguided production that handicapped them at every turn.

This Bohème, a shared production originally directed by Davide Livermore (the revival here was helmed by Alessandra Premoli), features elaborate computer-generated projections of famous paintings by Van Gogh and others. These ever-shifting backdrops often overwhelm the action—at its worst, making the show look like a lurid Disney animation-plus-live-action movie.

It’s wrongheaded in so many ways. Marcello, the painter among this group, gains unearned prominence (this is not Cook’s fault). Marcello supposedly creates the masterpieces we’re seeing, painting onto a projection monitor designed to resemble a canvas; because of this, the audience is often staring at the walls when we should be watching the characters. The gimmick also robs Bohème of all sense of metaphor and subtext—we now see flowers literally bloom and wilt.

Nor is there much else going on—aside from the distractingly busy projections, the stage is largely bare. The garret apartment setting for Acts I and IV is a city-block expanse, nearly empty but for a few pieces of furniture and a tiny stove.

Perhaps in an attempt to overcome all of this, the direction pushes much of the action far downstage, with the singers facing out in direct address, rather than looking at each other.

The ultimate irony for me is that this production, clearly meant to look fresh and bold, instead is an unnecessary frame (forgive my overworking the painting metaphor) surrounding a Bohème that often falls into clichés from the bad old days of barely-staged opera. There’s far too little specific action and way too much park-and-bark.

This excellent cast was delivering a musical Bohème at or near the highest standard—they certainly deserve better. So does the audience.

The last straw is that somehow this unwelcome innovation requires 45-plus minutes of breaks in the action (a long pause between Acts I and II, and two 20-minute intermissions). Any hope of dramatic cohesiveness that wasn’t dashed by the cartoonish stage antics was swept away by the interruptions. I’ll give a bouquet of Mimí’s favorite flowers to the company that figures out how to do Bohème—with its barely two-hour running time—without an intermission.

Theatrically speaking, this Bohème is a mystifying miscalculation from a company that has gotten better and better over the last decade, not least through some very imaginative stagings by fine directors. But a miscalculation it is.

“It took forever to download,” reported an Opera Philadelphia artistic administrator about the elaborate graphics. Nevertheless, they persisted. And sadly, that’s exactly what this production does: it takes Puccini’s opera—as close to a perfectly constructed dramatic arc as anything I know—and downloads all over it.