Jest you, jest me

Friday night’s Rigoletto at the Metropolitan Opera revealed once again a predictable dissonance between the performances on stage and Michael Mayer’s production. 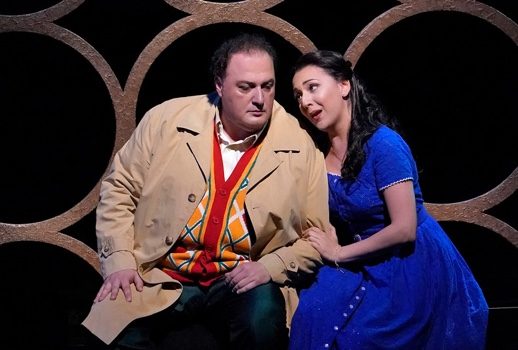 Friday night’s Rigoletto at the Metropolitan Opera revealed once again a predictable dissonance between the performances on stage and Michael Mayer’s production.

The performers—musically fresh, alive and on their game—seemed out to sea dramatically, detached, and maybe a little bit confused. They did their best to illuminate their characters’ interior lives, but without much success. Consequently, they had to draw on their superior vocal techniques to deliver elegant, pleasant performances, despite the clunky production.

In a deep field of talented vocalists, Rosa Feola’s debut as Gilda took top prize. Her radiant soprano and youthful countenance made for an exceptionally guileless interpretation. Her nimble voice had a simple, expressive quality.

Rather than a suave sociopath, Matthew Polenzani played the Duke as an aging playboy. He was more pathetic than menacing, and I found this choice rather compelling. One could see the cracks in his veneer beginning to chip away; there was just a note of quiet desperation, a need to prove something to his circle of sycophants. Vocally, however, he had nothing to prove. He delivered youthful, vibrant singing: clearly produced, in tune, elegant, with gorgeous phrasing.

Rounding out this trio, George Gagnidze sang wisely. As Rigoletto, he went more for grace and polish than booming volume. It was well considered. The result was an elegant performance, though a bit disconnected from the proceedings swirling around him.

As the deliciously seedy Sparafucile and Maddelena, Dimitry Ivashchenko and Ramona Zaharia had a good time camping it up and doubling down on their dirty bad behavior. Their robust, full-bodied voices invoked a hint of danger and a dash of luxury in the final act.

Michael Mayer’s production of the opera presents, in theory, an interesting concept; but having successfully re-worked the text to fit a new time period, the direction lacks a fundamental stagecraft. And this deficiency saps the piece of its vitality.

By updating the events to 1960s Las Vegas, there does seem to be an effortless contiguousness between this more modern context and the original 16th century backdrop. Most saliently, the two time periods share a vicious misogyny. The cruelty with which the male characters exploit women for their own pleasures feels potently unnerving, not to mention plausible.

Rigoletto’s conservative protectiveness of Gilda makes sense in this setting, because there are real consequences hanging in the balance—not just for Gilda’s virtue, but also for her physical safety. Indeed, as I have written before, one of the most disturbing images of Mayer’s production occurs when the courtiers kidnap Gilda. As the elevator opens and they bring her forward, bound and gagged, the audience can see Giovanna’s legs, lifelessly sprawled on the elevator floor—the rest of her body is hidden from view.

The visual dissection of her body, where only the legs protrude, is a vulgar, brutal reminder of the courtiers’ casual indifference to women. In this sphere, the female body is available for sexual gratification and physical violence—and the distinction between these two modes is difficult to parse.

This felt most true in the final Act, when the curtain opened on a topless woman swinging on a pole for the sexual titillation of some rough creep. The audience rustled at the image—out of discomfort or prurience, it was hard to tell. But while I get its placement within the scene—to show the seediness of Sparafucile’s domain—the moment felt forced: licentious for licentiousness’ sake, vaguely exploitive, as if it were participating in the machinery of misogyny, but not exposing it.

This point might be extended to the production as a whole. Its efforts to be clever often prevented it from transforming the material into something spontaneous and combustible. The ideas made for a broad sketch, but not a fully realized rendering. This was especially true about the blocking.

To begin with, the characters seemed so distracted by their own internal thoughts that they rarely addressed one another. As a result, the staging became simple and tedious; it didn’t strike me as inventive; it didn’t make interesting use of space. And it didn’t seem grounded in reality.

Instead, the evening was far too preoccupied with an effort to justify the concept—placing Gilda’s body in the trunk of a car, casting the Duke as a pop star, and dressing Maddalena up as a streetwalker. In the midst of all this business, there was a failure to tend to the business of creating straightforward drama.

Nicola Luisotti, for his part, tried to generate some of that heat through his conducting. And indeed, the orchestra menaced, hissed, and growled with like a caged lion.

In short, it was a night where musicianship triumphed over theatrics. However, I don’t think it’s beyond reason to expect more from the form than musical excellence—otherwise, why not perform the piece as a concert. Opera is theater. And I think a higher standard should be applied to the Metropolitan Opera, which purports to be a world-class company, if not the greatest house in the world.