All she has to do is dream 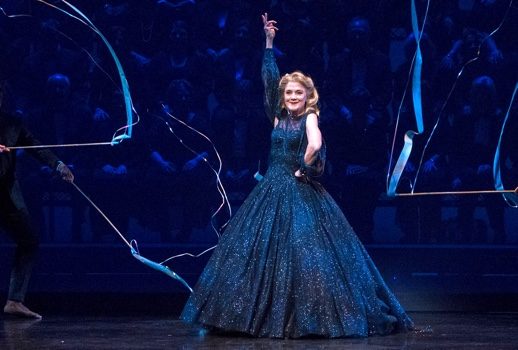 For sure, it made my bucket list: I never thought I’d see Lady in the Dark, one of the finest and most complex musicals ever written, resurrected essentially complete with original orchestrations and a cast up to its considerable demands. Yet, thanks to MasterVoices and Ted Sperling, there I was!

The other day, I attempted to describe the show to a friend, and even that process thrilled me—just trying to capture it reminded me how original and audacious it is. So, let’s start there.

Lady in the Dark is a 1941 musical (score by Kurt Weill, lyrics by Ira Gershwin, book by Moss Hart) about a fashion editor (originally played by Gertrude Lawrence) named Liza Elliott, who—despite all outward signs of success—finds herself deadlocked both professionally and personally.

The former problem manifests itself in her inability to pick a magazine cover for the Spring issue. (The two contenders are a regulation Easter theme, or a bolder circus one.)

The latter is the deeper problem, of course. It stems from Liza’s stalled relationships—or, seen more therapeutically, from the self (selves plural, really) she presents to the world. There’s Liza the formidable boss (think prototype for Anna Wintour.) But there’s also the alluring, vulnerable self that Liza would like people to see. How to reconcile them? 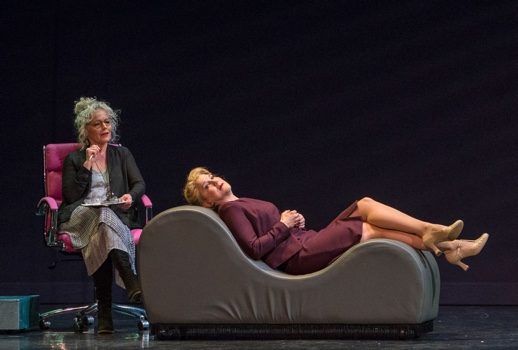 As you’ve probably guessed, Lady dates from America’s early infatuation with psychoanalysis. Sure enough, the way Liza decides to sort out her issues is through consultation with a psychiatrist named Dr. Brooks, who of course detects that the problems are interconnected, and proposes exploring the root cause.

In a coup-de-théâtre of formal experimentalism that still dazzles me, that exploration leads the show into a structure as deeply bifurcated and revealing as Liza’s own personality.

Half of Lady is a sophisticated workplace comedy, full of banter à la His Girl Friday; the other half is virtually an opera—or perhaps more accurately, three mini-operas—in the form of dreams that Liza recounts to Dr. Brooks: the Glamour Dream, the Wedding Dream, and the Circus Dream.

The key to putting it all together will eventually be a single song: the gorgeous “My Ship,” which survived as a jazz standard long after the musical itselfleft the spotlight.

If it sounds complicated, it is. Also brilliant. What must the lucky first-night audience have thought when they saw and heard something so sophisticated and out-of-the-box? Can we imagine a contemporary audience taking in a stride—or even minimally comprehending—a lyric like this?:

A delicate poem by Herrick—
But, surely, heavier than a derrick
Compared to our Liza—she’s so glamorous
She makes all other women appear Hammacher-Schlammorous.

Of this much I feel certain: Lady in the Dark is the greatest musical that hardly anyone has actually seen.

From the first notes heard at City Center, it was clear that Lady was in good hands musically. (Sperling, a longtime advocate for the show, helmed the impeccable reconstruction.)

What was perhaps more surprising happened the moment Victoria Clark (playing Liza) meets Dr. Brooks (Amy Irving, in a non-singing but crucial role). As Clark explained why she was consulting a psychotherapist, her voice had an emotional catch—we were going to see a Lady in the Dark that took the premise of psychanalysis seriously.

Clark is absolutely the right actress to do this—scrupulous honesty and a lack of artifice are hallmarks of her style. Irving met her with an equally committed directedness.

In many ways, this was a revelatory choice—it raised the stakes and made some admittedly antiquated ideas seem less sexist and more contemporary. There were some costs, too, in downplaying the glamour—but I applaud the choice.

By the way, since Lady is a show about fashion—Irving, in her flowy, tunic-like costume, could have stepped straight out of an Upper West Side therapist’s office today; Clark, in a very luxe touch, was decked out in swoon-worthy couture by designers including Zac Posen and Marchesa; and the remainder of the cast sported a wild mix of styles that culminated in the wonderful David Pittu’s circus costume, which made him look like the love child of Spanky McFarland and Ute Lemper.

In short, the clothes—like the show—were a wild and wonderful mélange.

Clark was a similarly interesting fit vocally for Liza. Superb technician that she is, she seamlessly integrated her lustrous soprano with a leaner, more pop-oriented lower register. If anything, the blend seemed a little too easy—in “One Life to Live,” I wished for a somewhat jazzier rhythmic style that would push the chest voice a bit more prominently. 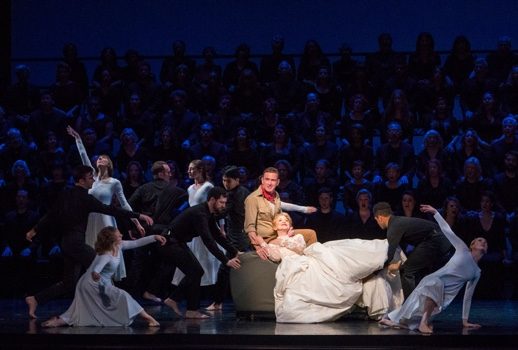 But vocally and dramatically, she absolutely aced “The Saga of Jenny,” and it would be difficult to imagine a lovelier or more moving “My Ship.”

If Clark provided much of the firepower, it was Pittu, recreating the role that made Danny Kaye famous, who very nearly stole the show. Able support was also provided by Ron Raines and Ben Davis (as Liza’s suitors); Christopher Innvar (as her workaday sparring partner), and Ashley Park and Montego Glover (as her editorial support staff.)

And while we’re at it, let’s not forget the other important star of this show—the MasterVoices. It’s inconceivable that the complexities of this score could be realized in a short time frame by anything less than an expert choral ensemble. They were superb, and their presence is really how this Lady in the Dark came to be. Bravi tutti!

Also, bravo Sperling, who was both musical and theatrical director. The dream scenes were staged (and danced!) with an evocative surrealism that really captured the tone. The non-musical sequences frankly fared less well—they need that George Cukor/Howard Hawks sparkle that requires more time and speed than could be delivered in a reduced rehearsal process. And as I said before, I’m not sure Clark is quite the right fit for this style.

But that they could deliver the show at all in this time frame is little short of miraculous.

If there was anything at all bittersweet about this Lady, it’s that the show deserved far more than the three performances offered at City Center. But I fear its exceptional demands make any kind of transfer unlikely. Dare we hope for an audio CD capture, at least? What a gift that would be for musical theater fans and historians, who at this point have only a couple of heavily edited recordings available to listen to.

But I’m reminding myself that what disappears quickly also becomes even more precious. For now, Lady in the Dark is, indeed, “The Girl of the Moment”—and I’ll remember the moment for years to come.