Legrenzi married the quirky libretto to a score of transcendental beauty. 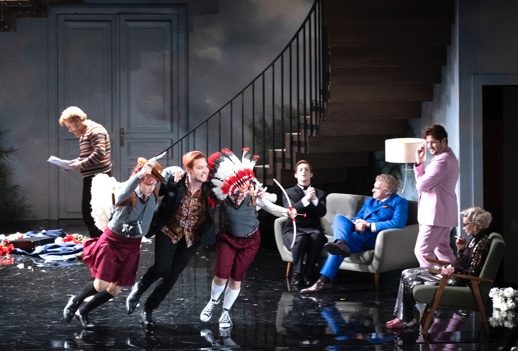 One of the few the surviving operas of Giovanni Legrenzi, the 1675 La divisione del mondo (The Division of the World) was presented by Opéra Royal Versailles last weekend (seen on 4/13).

After Claudio Monteverdi and Francesco Cavalli, Legrenzi (1626 – 1690) was arguably the most influential Italian Baroque opera composer in the 17th century, particularly crucial in the development of operas as we know now. He composed nineteen operas, most of which were unfortunately lost.

The work, with libretto by Giulio Cesare Corradi, was commissioned by the Marquis Guido Rangoni and premiered at Teatro San Salvador in Venice. It was highly acclaimed at the premiere due to elaborate set, machinery and special effects, and in turn it became Legrenzi’s most widely performed opera.

The modern revival of La divisione del mondo happened in 2000 at the Schwetzingen Festival using a performance score prepared by musicologist Thomas Hengelbrock, who also conducted the premiere. This was the same score used by Christopher Rousset and his Les Talens Lyriques, in a co-production with Opéra national du Rhin (Strasbourg) and Opéra national de Lorraine (Nancy).

The theme of La divisione del mondo is typical of 17th century mythical libretti, as the story revolves around the division of the universe among four generations of Olympian gods after they, led by Giove (Jupiter), defeated the Titans.

However, Corradi’s libretto is remarkable for emphasizing chaos, instead of heroic achievements, as the driving force of the opera. The goddess Venere (Venus) takes charge, leading all and sundry into debauchery. She even pronounced her intention clearly in her Act 2 swingle anthem “Voglio aver più d’un amante” (“I want to have more than one love”).

Legrenzi married the quirky libretto to a score of transcendental beauty. It is full of short arias, duets, even trios and quartets that vary from character to character, and truly advance the action on stage. The demarcation lines between recitatives and arias are blurred, as if anticipating Handel’s late opera seria (think Serse or Imeneo.)

In a way, the opera reminded me a lot of ‘80s prime time television soap operas like Dallas and Dynasty. This was exactly the approach that Dutch director Jetske Mijnssen undertook in mounting the work.

On a single static set with multiple doors and two staircases, Mijnssen depicted the pandemonium as a comedy of manners, a tableau of what was happening in a rich family’s home behind closed doors.

Julia Katharina Berndt’s casual elegant ’80s costumes completed the picture, and the significance of Venus was further emphasized by the gigantic picture of naked Venus that adorned Herbert Murauer’s set, as well as the stage curtain.

The set disintegrated for the last act (after intermission), probably to signify the dissolution of the tight family bond, though on that night, a technical problem left the curtain hanging halfway in the beginning of Act 3 for a while.

Interestingly, Mijnssen staged the ending in a quite fashion. After Marte (Mars) and Venere were pardoned by Giove, they were all back to square one, as pretty much all the guys gravitated towards her once again in the same dining table that opened the opera, leaving behind their intended partners gathered on the other side.

It was a logical conclusion, given the circumstances and human nature, however I couldn’t help thinking that it unfortunately made the production felt rather inconclusive.

With such a simple stage and minimal props, it was left to the singers to up the ante with their singing and acting. La divisione del mondo requires 12 singing parts that can’t be doubled, particularly in Mijnssen’s vision, as most of them appeared on stage more or less at the same time.

In fact, Mijnssen additionally personified two other (silent) characters that were only mentioned in the libretto, Saturno (Saturn)’s wife (aka Giove’s mother) and Thetis, Saturno’s wife’s nurse (in this production) who eventually became Nettuno (Neptune)’s wife.

One of the greatest strengths of the performance that night was the cast, consisted of mostly young Baroque specialists, truly worked together as a close-knit ensemble in well-choreographed movements. It helped a lot that they mostly shone in their individual parts as well.

Any performances of La divisione del mondo will undoubtedly depend on the soprano who sings Venere. The Carmen-like role, a plum one for a Baroque coloratura soprano, undergoes a variety of emotions and requires great acting with certain restraint in order not to let the character turn into caricature.

Belgian soprano Sophie Junker, winner of both 2010 London Handel Singing Competition and 2012 Cesti Competition, completely inhabited the role with her winning interpretation, treading a fine line between seductiveness and elegance.

Her crystalline bright voice sounded effortless and gorgeous, particularly in the heartbreaking Act 3 lament aria, the most famous one from this opera, “Lumi potete piangere”. You can hear a snippet of her take on that aria in the trailer from Opéra national du Rhin.

Singing the role of Marte in place of Christopher Lowrey (who did it in Strasbourg and Nancy) was countertenor Paul-Antoine Benos Djian, whom I had never heard before. He was a revelation, singing in dignified and confident voice, and his voice blended well with Junker in their many duets throughout.

I was additionally super impressed with the other soprano roles, Cinzia, as sung by Soraya Mafi. The role has a tendency to be scene-stealer (Simone Kermes assumed it at 2000 at the Schwetzingen Festival), and with her bright bell-like voice the audience couldn’t help but get fixated to Mafi; be it in the anti-love duet with Nettuno (Neptune), or particularly in the lengthy Act 2 lament aria “Questo cor non è più mio”.

Carlo Allemano brought an air of authority and mischief in equal measures as Giove in striking blue suit, but the roles of his brothers Nettuno and Plutone (Pluto) that were truly striking to me. Legrenzi wrote the music for them in an unusual manner; they were almost like a twin as they sang little duets almost throughout, breaking only when they had to express their individual feelings.

Stuart Jackson and Andre Morsch worked extremely well together in their roles respectively and they had great chemistry. It also helped that Jackson’s lyrical tenor and Morsch’s booming baritone contrasted and matched each other. Their approach to their roles can be viewed in this interview:

As the vengeful Giunone (Juno), whose jealousy (isn’t this always the case?) brought an ending to the saga, mezzo-soprano Julie Boulianne was sufficiently angry, although personally I felt her coloratura was rather choppy.

The other roles were all handled proficiently; Arnaud Richard made a stately Saturno, Jake Arditti a wimpy Apollo, Rupert Enticknap a mysterious Mercurio and Ada Elodie Tuca a child-like and funny Amore, in schoolgirl outfit with wings.

As expected, Rousset led his Les Talens Lyriques in a direct and exciting manner. I loved that he brought out the festive aspects of the score, letting the orchestra dance through the many orchestral passages. Interestingly, I heard the woodwind section created some kind of “murmur” effect (almost like minor glissandi), particularly noticeable in the Prelude and towards the end of the opera, that I had never heard before in the music around this era.

This was such a major discovery for me, and – judging from the lengthy applause – quite possibly to all the audience as well that night, that I wish this was recorded. A rare but important opera, especially played at that high-level conviction, truly made the best case for its revival. Hopefully Rousset will consider reviving further Legrenzi’s operas (Il Giustino, next?) in the future!