A Lesbian in distress

Zelmira, a work of 1822, was the last of the eight operas Rossini composed for the Teatro San Carlo in Naples, then the largest opera house in Italy—perhaps in Europe. 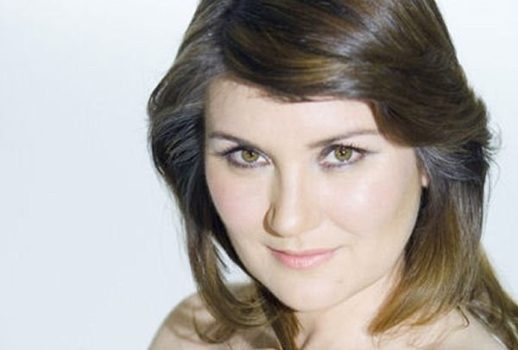 Zelmira, a work of 1822, was the last of the eight operas Rossini composed for the Teatro San Carlo in Naples, then the largest opera house in Italy—perhaps in Europe. He paid special attention to the orchestration, as the opera was set to feature in a triumphant festival devoted to his works in Vienna later that year, and the Vienna players were already renowned.

This was noticeable at Friday’s revival of the work—possibly the first in America since its 1835 New Orleans debut—by the Washington Concert Opera at Lisner Auditorium, where the elegant harp solos, with English horn chiming in for one aria, and many deliciously intrusive clarinet figures were elegant touches in this forgotten but sometimes brilliant score.

Rossini’s Neapolitan operas, which included Elisabetta, Regina d’Inghilterra, Mosé in Egitto and La Donna del Lago, were mostly of a serious nature. Many of them featured three particularly skilled singers, the soprano Isabella Colbran, whom Rossini married just before the premiere of Zelmira, and the tenors Giovanni David and Andrea Nozzari.

Some of them (Otello, Armida, Ermione) featured a third or even a fourth bravura tenor part—the virtuoso tenor was fast replacing the castrato and the trouser mezzo as the heroic figure of the opera stage.

The bel canto tenor was eclipsed with the arrival of Verdi and, later, Verismo, and there were scarcely any such singers to be found by the 1950s and ‘60s, when that earlier era proved ripe for rediscovery. Only operas that featured sopranos or the very rare mezzo could rely on anything like the proper dazzling technique, and Rossini’s Neapolitan operas were among those that languished for the right interpreter.

But lately blazing coloratura has been taught, studied, featured in every vocal range. Accordingly a Donna del Lago at the Met, an Ermione at New York City Opera, a Zelmira in Washington, D.C. becomes a rewarding occasion for devotees of the male bravura voice.

There are two principal tenors in Zelmira. Ilo (David’s part) is Zelmira’s husband; Antenore (the Nozzari role), is a villain who not only murders his king (before curtainrise) but also blames the deed on the innocent Zelmira, and sings (to a chorus of soldiers) a heroic aria and cabaletta about how crushed he is by all this bloodshed. A rough customer. This role was taken by newcomer Julius Ahn.

His rival, Ilo, a Trojan prince, out of town during the pre-curtain political shenanigans and therefore easily convinced his wife is a parricide, was taken by Lawrence Brownlee, a favorite with audiences in Washington just as he is in New York.

Setting two bel canto tenors opposite one another can triumph if the qualities of their voices enable the audience to tell them apart—as was surely the case when Nozzari and David created this opera. Brownlee’s flowing, mellow sound and fioritura style are known and admired, and his high notes were polished and secure, though by the end of the evening he seemed to be running out of steam, his voice losing some of its silvery quality.

Ahn, in contrast, has a spectacular florid technique but produces a shrill, unpleasant sound, just right for the village conniver. His singing was always impressive but the voice less than attractive—rather like Rockwell Blake back in the day. It was easy to choose which man to root for.

But the voice that thrilled me, from first appearance and ever more delectably as the long evening went on, was that of Silvia Tro Santafé in the title role. I last heard Tro Santafé many years ago, as Tolomeo in Handel’s Giulio Cesare; her mezzo has bloomed into a theater-filling sound of gleaming colors.

There was one top note in a concertato that all but escaped her—she sang it prettily, but it was a small thing when everyone else was shouting loudly—but otherwise this was an exciting performance based on a bel canto evenness of production, seemingly endless breath control, and skillful ornamentation. She sings all the usual Rossini and Bellini mezzo parts in Europe these days, but she is taking on Eboli and Laura Adorno as well—she has the power and the sensuality to delight in those roles.

Vivica Genaux, who has been before the bel canto public for a generation, sang Zelmira’s confidante, Emma, to whom Rossini politely gives a double aria lest she feel ignored. (There was a particular mezzo in Vienna, a local favorite, whom he was anxious to feature.) Genaux is still a fine coloratura technician, and she also won the evening’s best gown honors (pre-Raphaelite green, with gauzy veil-like attachments), always a feature of concert opera performances.

Patrick Carfizzi, a familiar figure at the Met, sang Zelmira’s deposed and morbid old father, King Polidoro of Lesbos, whom she has hidden in a tomb in a temple when everyone else thinks him slain. (Antenore finds this out and sets fire to the temple—but it’s the wrong temple.)

Polidoro sings melancholy laments and an occasional duet (the one with Brownlee’s Ilo was particularly unusual and attractive), and Carfizzi sang them stirringly, with a far richer sound than his Met comprimario career would lead one to anticipate.

Matthew Scollin, who performs with the Air Force Band, drew the small but vital role of Leucippo, wicked Antenore’s aide and abettor, a scoundrel of the first water—I thought of the young, slimy Vincent Price, whom he somewhat resembles. The voice is not attractive but he handles it with great skill: he can snarl with the best and insinuate to a degree. It’s a character voice that left no one in doubt what sort of character he was playing.

This was evidently the Lesbian season for Washington National Opera—like Gounod’s Sappho, which I so admired last fall, Zelmira is set on the island of Lesbos.

Once again I was impressed by the skill and taste and energy of Antony Walker, the company’s artistic director and conductor, who provided a dramatic pace alternated with somber moods for Zelmira’s changes of melodious tempo, and permitted his soloists to shine in the highly individualistic ornamentation. (Next fall the company moves to more familiar ground with Ambrose Thomas’s Hamlet.)

It is a delight to hear forgotten works sung by a proficient cast, to understand their obscurity and see if they are worthy of rejoining the repertory. Sappho, I believe, merits revival. Zelmira,fun though it was to hear with such forces, will remain a curiosity. Based on a lurid French tragedy (most Italian grand operas of this period were based on French plays), the plot is complex and improbable, the psychological portraits absurd.

None of these characters has much depth; just clichéd motivations and pretty tunes. One longed to hear this excellent cast sink its chops into a better drama.

I began to go to the opera in the golden days when the American Opera Society was breathing its last and Opera Orchestra of New York bidding to replace it. New York owes some of the most magical nights of its operatic history to those two companies and others like them that presented fascinating but obscure repertory, some of which joined the onstage repertory after such hearings, and the concerts often starred unfamiliar singers we were delighted to encounter.

Today, New York is no longer a great town for concert opera. Leon Botstein’s American Symphony Orchestra does an out-of-the-way opera each year (last month it was Martinu’s surreal Julietta, with terrific singers), the Collegiate Chorale sometimes indulges in an opera if the chorus part is sufficiently sizable, Teatro Grattacielo gives one Verismo obscurity each fall, and Harry Bickett does a Handel vehicle every year—usually a well-known one.

A newcomer lacking in international voices but rich in ambition, New Amsterdam Opera, will give Massenet’s Herodiadenext month. Am I being overly Manhattan-centric in suggesting this is not sufficient to slake the thirst of the local audience?

Washington, in contrast, boasts both WCO (two operas a year) and Opera Lafayette (two or three), which last often comes north to give us a glimpse of what’s on offer. In Boston, Odyssey Opera alternates stagings of Offenbach’s La Belle Helene with concerts of such works as Die Aegyptische Helena (on April 19, that last—this is their “Helen of Troy” year).

Even Baltimore has a Concert Opera organization. It’s a good thing the appeal of such events is understood more widely than in New York, but I could wish we still had a company dedicated simply to producing opera’s vast all but lost repertory.