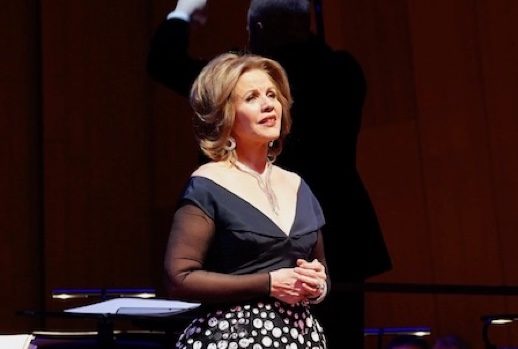 Lyric Opera General Director Anthony Freud introduced the evening, citing Fleming’s onstage work at Lyric as well as her significant work as Lyric’s Creative Consultant since 2010: new audience development, mentoring and advising the singers of the Ryan Opera Center, advocating for new works and the inclusion of musical theatre in Lyric’s seasons and, perhaps most important, being a powerful voice for keeping arts education in the curriculum of Chicago’s Public Schools.

But this night was all about the music.  Fleming sings more carefully and with more calculation these days, but her luminous soprano is still capable of exquisite moments of beauty and her always-elegant phrasing never fails her.  And on this night, she seemed much more emotionally and physically expressive than she has in recent years.

After a rather tepid Overture to Mozart’s The Marriage of Figaro from conductor Patrick Summers and the members of the Lyric Opera Orchestra, Ms. Fleming emerged looking fabulous in a Carolina Herrera gown (she appeared in a shimmery Vivienne Westwood number for Part Two), to sing the same opera’s “Porgi amor”, Countess Almaviva’s lament on losing her husband’s love.

She sang with limpid beauty, depth of feeling, and remarkable legato control.

Her later contributions were her signature aria “Song to the Moon” from Dvorak’s Rusalka (which she hilariously introduced as “an opera that’s basically The Little Mermaid except everybody dies”), elegant and eloquent; the Act Three duet “Baigne d’eau mes mains” from Massenet’s Thais with baritone Quinn Kelsey, both singers perfectly attuned to each other’s phrasing and breathing; and finally, two musical theatre selections (for which she brought out a hand microphone that seemed completely unnecessary), “Fable” from The Light in the Piazza and “You’ll Never Walk Alone” from her Tony-nominated turn as Nettie Fowler in Carousel.

Only in these final selections did some mannerism begin to creep into the interpretation and some inappropriately jazzy phrasing dampened the power of the Carouselselection.

But the vocal honors of the evening went to Sondra Radvanovsky, in glorious voice and seeming at the height of her powers.  She first gave us a goose-bump inducing, fierce version of Tosca’s “Vissi d’arte” with fearless and thrilling high notes and deep emotional commitment.

She made the aria her own, starting the final word “cosi” at a whispery pianissimo, then expanding the sound until it became not the plea of a victim but a demand that God come to her aid. It was the finest “Vissi d’arte” in my rather long operatic memory.

Radvanovsky returned later offering another deeply felt and superbly sung “Ain’t It a Pretty Night” from Susannah, the role of her (and Fleming’s) Lyric debut.  Forgive the cliché, but she brought the house down.

The tenor Lawrence Brownlee also made a stunning vocal contribution to the evening, first with a velvety, caressing version of “Un’ aura amorosa” from Mozart’s Cosi fan Tutte, followed by a delightful, joyous rendition of Donizetti’s “Ah mes amis…” from La fille du regiment.  Never have all those high C’s been dispatched more effortlessly or beautifully.

Another major highlight was the exquisite playing by violinist Robert Hanford in the Meditation from Thais, achingly beautiful.

We also had members of the Ryan Opera Center singing group numbers, the men doing “Women, women, women” from The Merry Widowwith high spirits and some over-the-top antics (a kick line, guys??) and the women doing “Sing for your supper” from Rodgers and Hart’s The Boys From Syracuse.

The ladies sang well but lacked diction and final consonants failed to bite—it was very hard to understand the lyrics.

Guest host Tituss Burgess provided occasional humor but his appearances mainly fell flat until we finally understood why he was there—at the top of the program’s second half, he moved to the piano and accompanied himself in a searing, potent, jazzy reading of “In a Sentimental Mood”—he has a splendid voice and knows how to use it.

The evening ended with Ms. Fleming making a surprise announcement: Lyric Opera will host 10 performances of The Light in the Piazza in December around the holidays, starring Ms. Fleming as Margaret Johnson. Her work in Chicago’s musical and artistic communities continues.