Kiss Me Kate is a sophisticated soufflé of a show: a comedy of manners, requiring effortless verve and elegance in the playing. 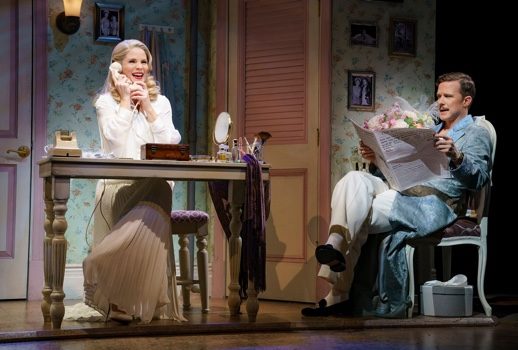 Cole Porter wrote music and lyrics for more than two dozen Broadway musicals over nearly four decades. Scads of his individual numbers are cornerstones of the Great American Songbook. Yet the shows themselves are largely forgotten–or, as in the case of Anything Goes, now performed in radically revised editions.

But Kiss Me Kate, a late career hit, still plays like gangbusters, starting with a near genius set-up (Sam and Bella Spewack wrote the funny book). Lilli Vanessi and Fred Graham, formerly married operetta stars, now presumably in the waning days of their fame, reunite to star in a new musical version of The Taming of the Shrewthat’s about to premiere in Baltimore.

The fractious romances—Lilli and Fred’s, and (within the Shakespeare) Katharine and Petruchio’s—play in delicious counterpoint.

Porter delivers on all cylinders, from gorgeous romantic ballads (“So in Love”) to the brilliantly sophisticated comic numbers that were his specialty (“Always True To You In My Fashion”). My favorites are the pastiche songs that slyly meld Shakespeare with a colloquial twist (“Where Is the Live that Late I Led?”).

Kiss Me Kate could be seen as Porter moving toward to the Rodgers and Hammerstein ideal of the “integrated musical” (Oklahoma! had opened five years earlier). Songs here do have a place and function in the larger narrative.

To me, though, it’s still very much rooted in an earlier aesthetic. Kiss Me Kate is a sophisticated soufflé of a show: a comedy of manners, requiring effortless verve and elegance in the playing.

The thing about these old musicals is you need to fall in love with them—including with their archness. Character motivation, consistent logic: don’t worry about it. Just go with it.

In Scott Ellis’s very busy, often entertaining revival, his love of the material is palpable, and sometimes he goes for the style. Each of the four principals get star entrances, designed to milk applause. The adjoining dressing rooms have a door right between them, suitable for farce. The painted backdrops (by David Rockwell) and yummy costumes (Jeff Mahshie) evoke a bygone era.

Yet Ellis also wants to apply a post-R&H theater style on the proceedings—to make Kiss Me Kate somehow more “organic.” The result puts this production between a rock and a hard place.

Sometimes songs, including “Where Is the Life” and “Always True to You,” are overplayed and winked at. In others, there is an attempt to turn a song into more of an interior monologue.

Usually, this means awkward tempo shifts and loosened rhythms meant to reflect the idea the character is actually thinking. In both scenarios—winking and interiorizing—the result undercuts the effectiveness of Porter’s material.

Among the cast, Corbin Bleu (Bill) is the most consistently satisfying. His dancing is terrific (the athletic choreography is by Warren Carlyle) and he has a lovely voice, but more than that, his easy charm is just right and he never pushes.

By contrast, Stephanie Styles is a grating Lois—she seems to think she’s funnier than Porter. (She’s not.)

John Pankow and Lance Coadie Williams are enjoyable but not a home-run as the gangsters. That they don’t quite nail “Brush Up Your Shakespeare”—almost always a showstopper, but less so here—is largely due to awkward reworking that deprives the song of its needed context. 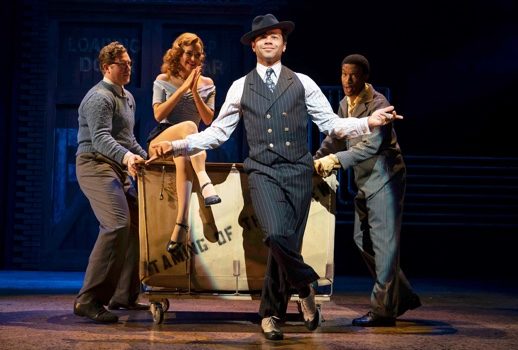 Will Chase (Fred) is a frisky, funny actor with a terrific baritenor ideal for many ‘50s and ‘60s musicals. But he’s vocally undercharged here, in a score that largely lies too low for him (though he’s also challenged at the top).

And though he’s more than a decade older than Alfred Drake was when the latter created the role, there’s a boyishness about Chase that isn’t quite right for Fred. Perhaps to compensate, he pushes too hard to land the jokes.

That leaves Kelli O’Hara, a wonderful and adored performer, likely the raison d’être for this revival. Her gorgeous soprano is in exceptional shape here, navigating some newly added coloratura flourishes with ease.

It’s a special voice, but at least as precious is O’Hara’s particular gift as an actor to find complexity, humanity and heart in characters that initially seem underdeveloped. In the right thing, it’s magical—her Babe in Pajama Game came across like a fragile but luminous Inge heroine.

Here, though, it’s too much of a good thing. Paradoxically, what O’Hara doesn’t have—a glamorous, flinty edge—is what Lilli needs. (The role’s creator, Patricia Morison, had appeared in a handful of films noirs prior to Kiss Me Kate.)

Early in the show, it struck me that O’Hara, like Broadway’s previous Lilli, the late, lamented Marin Mazzie, is a beautiful blonde giving a blonde performance… in a very brunette role.

A final word on the edition, which incorporates changes made for the 1999 revival (where playwright John Guare gave an uncredited assist) and includes new ones by Amanda Green.

Reviving Kiss Me Kate was bound to be raise some hackles, in part because the Spewack book and Porter lyrics reflect the unquestioned sexism of their time, but likely even more because the Shrew itself is now a cultural flashpoint.

The changes are largely subtle, though Green has substantively reworked Lilli/Katharine’s final monologue, which becomes not a supplicating female but a wide-spread plea for peace (it now begins “I am ashamed that people are so simple,” and continues in that vein).

I understand the impulse behind the change—I could even embrace it (though for sure many purists won’t) if this were actually a production of Shrew.

But it’s not—it’s a musical, set in the 1940s, that is itself a meta-musical of the Shakespeare. In that sense, it’s utterly illogical and anti-theatrical to alter it. Like so much of Ellis’s production, tinkering doesn’t solve problems—it creates new ones, often in places where there would be no problem if they simply trusted the material.

As I said—rock, meet hard place.