Teatro Real continued their 200 years' celebration by premiering a piece that they have never done before, Francesco Cavalli’s opera La Calisto. 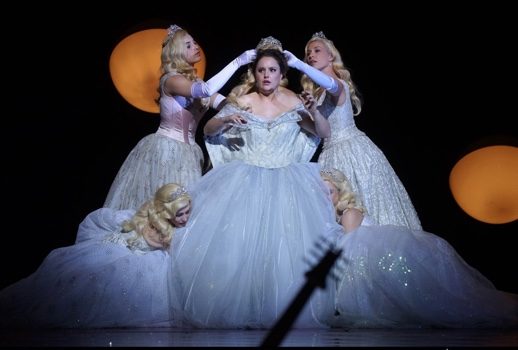 Teatro Real continued their 200 years’ celebration on Sunday by premiering a piece that they have never done before, Francesco Cavalli’s opera La Calisto.

Written in 1651 from a libretto by Giovanni Faustini (who died during its initial run), La Calisto was premiered in Teatro Sant’ Apollinare in Venice in an elaborate stage production with numerous effects and stage machinery.

After centuries of languishing in obscurity, the opera was revived in modern times thanks to the effort of British conductor Raymond Leppard, who in 1970 published the score and performed it at Glyndebourne Festival Opera.

That performance sparked interest in Baroque operas, particularly in Cavalli’s, and La Calisto is now quite possibly the most performed among Cavalli’s 41 operas.

Cavalli was one of the most important composers in the 17th century, and he was a key figure in the development of operas into public entertainment.

La Calisto is based on the myth of Callisto from Ovid’s Metamorphoses. Those who are well-versed in astronomy may remember the name as Jupiter’s second largest moon, and likewise, the story of the opera revolves around the seduction of the nymph Calisto by Jupiter (Giove), her tragic fate being turned into a bear by Jupiter’s wife Juno (Giunone), and her subsequent transformation as a constellation in the sky (Ursa Major).

For this presentation, Teatro Real borrowed a staging from Bayerische Staatsoper directed by David Alden. The well-travelled production, first seen in Munich in 2005 (also in London in 2008), had been very successful and revived many times there.

Teatro Real also engaged a galaxy of Baroque opera stars, double cast in nine performances to mark the glitzy occasion. For the opening night, the title role was sung by Louise Alder, winner of the Dame Joan Sutherland Audience Prize at the BBC Cardiff Singer of the World competition two years ago.

I have never seen Alden’s mounting before, so I had the opportunity to experience with a fresh outlook. Right from the beginning, Alden chose to present the complex work in a highly farcical fashion.

The Prologue, where Destiny convinces Eternity and Nature that Calisto deserves her own place with them in the heavens, was set with Eternity and Destiny were in hideous creature outfits, and Nature in drag with long beard, all watching Calisto’s photos projected on the screen.

This, in turn, set the tone for the whole opera; it was definitely a whimsical spectacle that while super fun, it came at the expense of sacrificing the more serious or tender moments.

The most baffling aspect to me was the juxtaposition of Paul Steinberg’s stage, set in ‘70s nightclub/lounge with psychedelic curves and bright colors, with Buki Shiff’s costumes and props that were riotous, but most of the time indicative to who the characters were supposed to be (particularly with regards to nymphs and satyrs).

I meant, when have you ever seen nymphs with arrows in swanky club? It was almost as if Alden couldn’t make up his mind whether all of the whole opera was some sort of LSD-induced hallucination, or where all the creatures dwelled in the wrong place.

I understood that things were so much different in 2005, but personally I would prefer not to see Giove, who supposedly came to Earth to survey the damage of wars, appeared on stage while giant black wings brandishing a machine gun!

Coupled with lounge/nightclub set, it created (to me at least) an uncomfortable feeling, in light of recent events! Additionally, the scene where Giunone, while sang her revenge aria, actually helped Calisto gave birth to a bright red baby doll (Arcas supposedly?) by pulling it off her crotch felt pretty unnecessary as well. (This was the second time I saw a title character gave birth on stage in recent months!)

I felt that Alden missed the opportunity to finish the opera in a satisfactory way. While Calisto’s transformation into a bear was effective (she put on bear suit that she couldn’t take off), the subsequent scenes where Jupiter decided to cut short her suffering and ascend her as a constellation of stars felt very underwhelming.

At the very least, he could have shown us the Ursa Major where Calisto became, instead of merely rows of lights!

Nevertheless, the presentation did have a number of clever ideas done right. I loved the fact there was a trench in front of the stage (right before the pit) that was used as an additional stage exit where characters, particularly Satirino, popped up to surprise the audience.

This also was the place where the final love duet (“Dolcissimi baci”) between Diana and Endimione took place. That scene, quite possible the most touching moment in the whole opera, was heartfelt particularly because of its simplicity, brilliantly illuminated by Pat Collins’ lighting, removed from the hyperactive background.

As La Calisto was such an important opera, all what mattered to me was the music, and I was happy to report that the musical aspects were uniformly excellent in pretty much all levels.

It helped to have the singers that were very familiar with the staging (as it asked a lot from them), as there was a sense of natural ease with both the singing and acting departments, no matter how outrageous the actual actions were.

Alder impressed me a lot as the title role. Although she started a bit wobbly (presumably opening night jitters), she grew more confident and her tone started to get warmer as the night progressed.

Calisto undergoes a broad range of emotions throughout the opera, from innocence and resilience, to sensuality and eventually extreme sadness, and it requires great acting to bring them all out.  Alder sufficiently demonstrated all those, although in Act 1 she didn’t strike me as completely innocent, but more of a perky nymph that played with fire and eventually got burned.

Her rather dark soprano navigated the score well, and she was devastated to watch in Act 3, as Giunone accused her of adultery and transformed her into a bear, and Giove couldn’t reverse the curse, culminating in that gorgeous duet with Giove “Mio foco fatale/Beata mi sento.”

Veteran mezzo-soprano Monica Bacelli, who originated Diana 14 years ago, moved with grace, almost like dancing, throughout the night. Her silvery delivery was on point, and she portrayed, both in singing and particularly in her costumes with a giant Moon headdress, an older Diana being wooed by a young shepherd.

Countertenor Tim Mead contributed significantly in this interpretation, as he completely conveyed a young and naïve Endimione, particularly with his clear unblemished coloratura. I liked the fact that Shiff dressed him in the most normal clothes on stage that night, as Endimione was pretty much the only mortal in the whole opera.

On the other hand, Karina Gauvin was completely striking as a jealous Giunone, dressed in bright red gown that stood out from the rest. Unfortunately, I detected some alarming strains at the top of her usually glorious voice that night, although it went well with her violently angry portrayal.

As her husband Giove, Luca Tittoto sounded authoritative with his booming bass. I had mentioned my reservation regarding his entrance above, luckily, he spent the rest of the time in Diana’s dress, or in a sleek suit.

From my seat, I couldn’t tell whether he sang in falsetto as Diana or he just lip-synched it, but he was such a hoot trying to impersonate Bacelli!

However, his very bright timbre took time to get used to, and he squealed a lot throughout. His counterpart, Guy de Mey fared better in his full drag apparel as the lovelorn nymph Linfea. Nevertheless, their comic timing and well-choreographed interactions provided the show many funny moments.

The comprimario roles were all handled effectively. Covered completely in gold, Nikolay Borchev made a shrewd assistant to Giove.

Tenor Ed Lyon was almost unrecognizable as the god Pane, decked in full feather costume with high heels (or was it a stilt?), reminiscent of Fasolt/Fafner. Bass Andrea Mastroni gave a dignified reading as Silvano, dressed in centaur with wings.

We are left with what truly was the star of the show that night for me, Teatro Real’s Musical Director Ivor Bolton. Bolton, who also led the premieres in both Munich and London, clearly knew the score like the back of his hand, and it was a great asset for the proceeding.

He led the Orquesta Barroca de Sevilla in a reading that was clear, detailed, well-paced, unhurried and yet still exuberant and full of colors. What was incredible to my ears was that there was element of purity, in fact almost sterile, in the sound that he coaxed from the orchestra.

It was almost as if Bolton tried to balance the “sublime sex comedy” (as Alden called it) on stage with the playing. Nevertheless, he supported the singers well, there was never any points where they got drown with the orchestra.

In summary, the show was truly an entertaining spectacle, if not life-changing, with a superlative music-making. Teatro Real and Bolton should be commended for bringing such a seminal work by an important composer into their repertoire.