Get in the ‘Ring’

Wagner’s Ring is an artistic masterpiece that is peerless in its ability to continually reveal layers of musical, theatrical, and philosophical insight 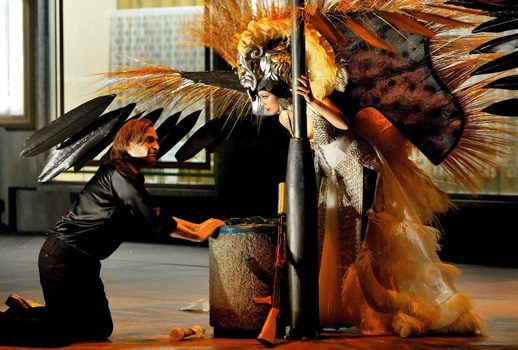 Wagner’s Ring is an artistic masterpiece that is peerless in its ability to continually reveal layers of musical, theatrical, and philosophical insight every time I revisit an interpretation of this score.

I was in my mid-teens when I first became acquainted with the composer’s great tetralogy. If I could not profess to have understood its multifaceted intricacies that early on, the industry of musicological and philosophical books on the Ring, the hours I’ve spent studying pieces of the vocal score on the piano, the treasure trove of broadcasts and studio productions of the recorded medium, and the smattering of Ring operas I’ve seen live have allowed me to scratch a little deeper (even if still only superficially) into Wagner’s rich world.

Artists who tell you that Wagner’s Ring requires a lifetime of distilling the scores for meaning aren’t exaggerating—if you love these operas, it is incredibly gratifying to rediscover little gems of interpretation, of a leitmotiv’s evolution, of a style of vocalism or orchestral execution, of a facet of character development, with every repeated hearing.

For this parterre post, I’d like to invite the cher public to share some of their favorite moments in the Ring.  If possible, I hope you can provide an explanation telling us why these theatrical or musical moments are important to you.

When I started interacting with the music of the Ring, my younger self just adored the big moments.

The creation of the world as manifested through the cycle’s opening prelude, the ascent of the gods to Valhalla in Rheingold, the Magic Fire Music that closes Walküre, the love duet in Siegfried, and the Immolation scene in Götterdämmerung all struck me with the extraordinary power and the emotional immediacy of Wagner’s writing.

I would call this phase the “symphonic excerpts” / bleeding chunks period of my formative years, buttressed by warhorses that likely form the bread and butter of every budding Wagnerian’s first mix tape (yes, I did make a mix tape of Ring excerpts in high school).

Rheingold’s politically rich second scene and Alberich’s curse took on a greater degree of importance, as did Wotan’s monologue in Walküre and his riddles with Mime.

In Götterdämmerung, the Norns’ and Waltraute’s finely spun web of exposition gained a more fascinating dimension. With these excerpts, I found so much to admire in how deftly Wagner marries the rhythmic vitality and motival tapestry of his orchestral scoring with the textual crispness of the libretto.

But funny things happen to people as they grow up. In the span of 15 years (the amount of time I’ve been revisiting the Ring), the way that I view political hierarchies and the distribution of power has become more sophisticated.

Hopefully, you’ve read a few more books, and you’ve become a little wiser about morality and human relationships. You develop into a more seasoned connoisseur of theater, and thus selections of text and music that may not have initially struck one as cardinal emerges as critical inflection points in the operas.

Today, the pieces of the Ring that captivate me most appear to deal with crucial transitions of power or moral shifts experienced by the tetralogy’s important players.

I think of the fourth scene in Rheingold, when the gods and the giants barter Freia (symbolic for the love that is so sacred to Wagner) against Nibelheim’s material loot. Apart from being a cohesive and impactful piece of ensemble writing, I find it incredible how Wagner scores such doom-laden desperation into his orchestration as Wotan contemplates voiding his contract with the giants for the Ring.

I find the contrast between this scene and the resolution that follows with Erda’s mysterious warning so compelling. At this junction, Erda offers Wotan a path to purge the world of Alberich’s curse, and thus begins the three opera-long mission to redeem creation.

In Die Walküre, although I still regard Wotan’s monologue and the Todesverkundigung as the tetralogy’s beating heart (it is in these scenes that Wagner triggers Brünnhilde’s ascendance as the hero of the Ring), a deeper examination of the Fricka-Wotan confrontation reveals the extraordinary transition that begins shifting the focus of the Ring’s redemption arc from the head god to his own daughter.

Wotan begins the opera under the impression that he is a free agent who can transcend the limitations of the rule of law. But Fricka, written so masterfully as an avatar for the gods’ honor code, dutifully exposes the holes in his master plan to reclaim Alberich’s ring.

Here, she grounds Wotan back into the reality of his limitations, all while unwittingly planting the seeds of rebellion into the Valkyrie who ultimately transforms into the tetralogy’s true free agent. (Alex Ross explains the criticality of this scene most beautifully in the New Yorker.)

In Siegfried, Wotan’s character wanders about the world with an attitude of carefree resignation. In his dialogues with Mime, Alberich, and Erda, one gets a sense that he has become unfettered from the chains that tethered him to the curse of Alberich’s ring and the rule of law.

However, during his encounter with the irreverent and boisterous Siegfried, Wotan gradually builds up a storm of emotions that cause him to reassert his authority. At this moment, he realizes that the end of the gods’ rule is expedited by Siegfried and Brünnhilde’s unification, and that power must now transfer to the proto-humans who will inherit the world.

The end of the confrontation becomes a dying beast’s last stand against a younger usurper. It’s just so thrilling musically and dramatically, as Wagner’s swirling, spear and sword motif laden orchestration culminates in the physical demise of Wotan’s symbol of power.

Götterdämmerung’s most important scene for me is the transformation that Brünnhilde experiences near the end of the second act (Scene V). Here, on realizing the corruption that pervades the mortal world, Brünnhilde sheds the last vestiges of the idealistic warrior maiden we encountered in Walküre.

The treachery of Siegfried and the Gibichungs triggers the series of epiphanies that would ultimately lead to her claiming agency over the Ring’s curse. We would get the noble, self-sacrificing side of Brünnhilde later at the cycle’s end, but I believe that it is here, when she is finally exposed to the corruptive nature of the Ring, that she begins the final leg of the journey towards becoming the tetralogy’s true hero.

So there are my current favorite excerpts from the Ring. Now that I’ve shared mine, I hope you can share yours as well in the comments section.

I’d like to recommend the following recordings that I’ve found most revelatory for the scenes I mentioned in this article.