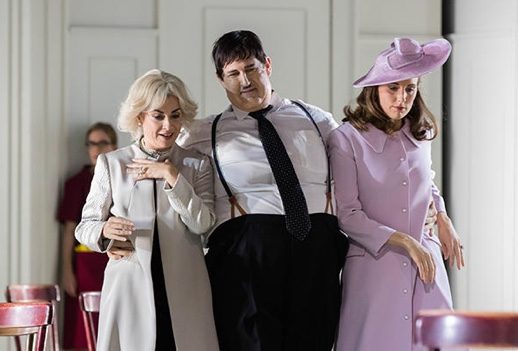 Centuries before network television schedules were filled with shows like Rhoda, The Jeffersons, and Laverne and Shirley Shakespeare may have created the very first “spinoff” when he gave Henry IV, Parts One and Two’s Sir John Falstaff his own play, The Merry Wives of Windsor.

That larger-than-life character has proven equally irresistible to opera composers, his most famous incarnation being Verdi’s which returns to the Met tomorrow night in the acclaimed Robert Carsen production.

Like other itinerant composers of his time, Salieri might have remained largely forgotten had it not been for a lingering legend about his obsessively envious relationship to Mozart which was transformed into a popular play by Peter Shaffer then an Oscar-winning film by Milos Forman.

As shown in Shaffer’s character Salieri was very successful; based in Vienna for much of his life, his operas were embraced all across the continent. One of his more important 21st century revivals was led by Riccardo Muti on the opening night of the 2004 La Scala season with Europa Riconosciuta, the very first opera performed when the house opened in 1778.

Diana Damrau who starred in that production later recorded a number of spectacular Queen of the Night-like arias from Europa for her “Arie di Bravura” CD.

While Cecilia Bartoli’s powers of resuscitation worked for Vivaldi’s operas, she doesn’t seem to have had quite the same restorative powers on those of Salieri.

…and Tarare (to a libretto by Beaumarchais) performed and recorded by conductor Christophe Rousset just this past November. He has also recorded the composer’s Il Grotta di Trionfonio and most recently Les Horaces.

I had hoped to experience one of the composer’s operas live but an opportunity last summer proved so excruciatingly painful that I fled at intermission. Oh well.

The 36th of Salieri’s operas, Falstaff can be downloaded by clicking on the icon of a square with an arrow pointing downward on the audio player above and the resulting mp3 file will appear in your download directory.

Perhaps Vaughan Williams’s Sir John in Love or Holst’s At the Boars Head will eventually turn up on “Trove Thursday.”