Wintertime, and the living is easy

Porgy and Bess, George Gershwin, Ira Gershwin and DuBose Heyward’s 1935 “folk” opera, graced the stage of Dutch National Opera for the first time last month, and it was resounding success from start to finish. 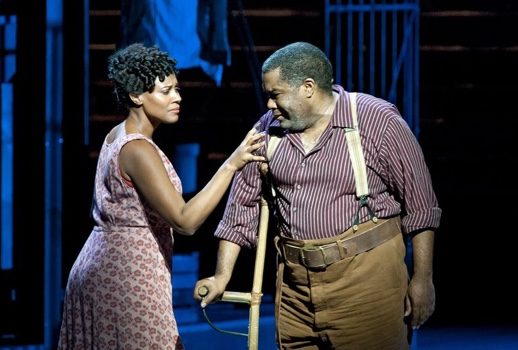 Porgy and Bess, George Gershwin, Ira Gershwin and DuBose Heyward’s 1935 “folk” opera, graced the stage of Dutch National Opera for the first time last month, and it was resounding success from start to finish.

Interestingly, this beautiful production, which premiered at the English National Opera a couple of months ago and is scheduled to open the Metropolitan Opera 2019-20 Season, was completely sold out for months in advance; a fact that was frustrating for traveling opera fanatics like me.

Luckily, the Opera Gods smiled, and I managed to catch the last performance on January 31.

What was truly striking to me, and eventually uplifting, was how much he maintained the tone of the performance to be continuously upbeat despite being hit with tragedies one over another; in a way, this truly showed how the close-knit community of Catfish Row prevailed over adversity; and that resonated well with me.

Yeargan set the whole Catfish Row in a single large skeletal wooden structure, with clear division of the dwellings of each character (Porgy’s on the bottom right, Serena’s top left, Maria’s shop under Serena’s, etc).

This structure was truly impressive, as it span, turned, moved forward and backward, and dissembled into smaller structures depending on the scenes, and most of those happened in real-time. Only during the Kittiwah Island picnic scene the set changed to a long stretch of harbor line.

Holder’s lighting was used tastefully to direct audience’s attention to specific scenes throughout, and I thought the stage was wonderfully lit. While the residents of Catfish Row were dressed mostly in workman clothes, Zuber’s costumes sprang with legion of vibrant colors, aligned with Robinson’s vision.

Dutch National Opera spared no expense in hiring a who’s who in Black American opera singers, and it paid handsomely; all those famous tunes sparkled bright like diamonds.

However, what truly impressed me that night was how much the ensemble, both the principals and the chorus, blended together as a team, as if they had been working together 8 shows a week for months like in a Broadway or West End musicals.

The call-and-response passages were perfectly timed, and everybody on stage was believable as a close-knit community. To see that in an opera stage was truly heartwarming, especially in an international opera house, and that lifted the experience to be extraordinary!

Porgy has been bass-baritone Eric Owens’ calling card for a decade now, ever since he made role debut at San Francisco Opera in 2009, and that night he truly showed why he’s the world’s leading Porgy.

Owens, who once thought Porgy’s vocal tessitura lay too high for him, certainly had no such difficulties anymore; in fact I found him in fresher and more relaxed voice than the performance from San Francisco.

His Porgy was a kind-hearted, solid-as-a-rock harbor, that seemed unassailable almost throughout the night. Only during the last moments (when he realized Bess had gone) that his defense shattered but still his optimism carried him through.

Adina Aaron’s Bess couldn’t be more different from Owen’s Porgy. Personally, I always sympathize with Bess; after all, to err is human, right? Aaron herself is a very smart woman, as shown in the DNO video above.

However, her Bess was decidedly earthy, a woman that was not a bad person per se, but she let her emotions overpower her thinking, resulting in her falling into bad decisions over and over again. Her soprano voice was full and beautifully floating throughout.

She and Owens sang the roles together at Lyric Opera of Chicago five years ago, and they really demonstrated great chemistry together, especially in that beautiful duet (and my favorite part of the score), “Bess, You Is My Woman Now.”

He was also literally popping up everywhere, like a bad thought that always showed up whenever it was decision time. “It Ain’t Necessarily So” now turned into a showstopper in a singing-and-talking style (a choice that might be less preferable for purists) as in the musical version, but his great rapport with the ensemble made it a winning form.

The supporting characters felt like an embarrassment of riches; all delivered in the best possible way. Furthermore, as I was seeing the last show, there was no holds barred for everyone in the stage.

With her crystal clear bell-like voice, Janai Brugger’s Clara floated the most famous aria of this opera, “Summertime,” dreamily and she would send any babies to sleep with her rendition. Mark S Doss was a strongly-voiced and even brutishly-characterized Crown; his abusive treatments of Bess were pretty hard to watch.

Latonia Moore took a break from singing Aida to personify Serena, ranging from a harrowing “My Man’s Gone Now” to the showy (even a bit campy) “Oh, Doctor Jesus”. Tichina Vaughn was a saucy Maria and Donovan Singletary a playful Jake.

Conductor James Gaffigan made a bold house debut with his effervescent reading of Gershwin’s masterpiece. Not only did he keep the actions moving, he actually found the time to highlight the various influences on the score, from the jazz aspects to particularly the gospel predilection. The many spiritual scenes felt very deeply “churchy.”

All in all, this was a winning production from everyone involved, and definitely one of the highlights of my trip.