Nina Stemme’s Elektra is familiar to me in three different incarnations. 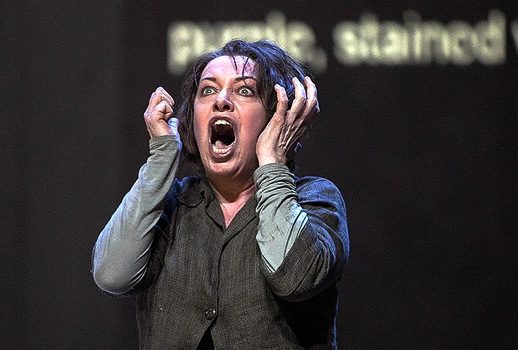 In May of 2019, Nina Stemme will scale the final summit of the heldensoprano Fach when she makes her role debut as the Färberin in Vienna. Over the span of her impressively cultivated career, the soprano has proven herself an incomparable artist in her piercing interpretations of Isolde, Brünnhilde, Salome, Elektra, and Kundry.

What she imparts onto these fascinating characters represents a most ideal marriage between a secure and exquisitely rendered vocal line, kaleidoscopic colorations and dynamics, and abundantly detailed verbal expression. In light of her tremendous accomplishments, I have little doubt that Nina’s legacy will be celebrated for how powerfully she has redefined musical and theatrical standards in the dramatic soprano repertory.

Nina Stemme’s beginnings as a Hochdramatischer originated from her flirtations with Isolde at the turn of the millennium. After triumphing in her first Tristan at Glyndebourne, she has since revisited Wagner’s metaphysical paean to desire over a hundred times in opera’s most prestigious venues.

Given her longevity, Stemme is also one of those rare singers who are afforded the privilege of refining her signature role over the course of almost two decades. On surveying the chronology of recordings and broadcasts over that period, I am most astonished by how she impregnates specific phrases with greater depth in every successive iteration.

A fleeting reference to Isolde’s thinly concealed desire—“Todgeweihtes Haupt, Todgeweihtes Herz”—in the first act immediately comes to mind. Another passage that exhibits an obvious transformation is the hypnotic, trancelike philosophical exchange that occurs between the lovers at the end of Act 2.

If Stemme’s early recordings paint the most direct tint of Isolde’s variegated moods, the more pensive emphasis and change in color evident in the most recent ones show an artist more deeply attuned to the complex, ill-fated Eros fundamental to the opera.

For those interested, Nina’s most recent Isolde from Cleveland (April 2018) can be heard from this radio station’s On Demand page. Her singing here communicates some of her most interesting ideas on Isolde to date, and finds her voice in warmer, more resonant form than what I recalled from the Met’s own broadcasts two seasons ago.

I’d like to shift my focus to another one of Stemme’s great roles. Stemme’s searing Elektra from the Lyric Opera of Chicago’s current run of the opera gave me pause for how much I felt she has evolved her dramatic ideas since her role debut in 2015.

In the years following, her voice has also transformed, with the timbre gaining a more seamless, viola like composition, its physical dimension acquiring an admirable expansiveness—qualities that I noted in her Royal Opera Brünnhildes.

Stemme’s Elektra is familiar to me in three different incarnations—I watched a video of the Uwe Eric Laufenberg streamed from Vienna, and I was present at her American performances in Patrice Chereau and David McVicar’s stagings in New York and Chicago.

While all productions come with directorial decisions that no doubt influence the opera’s character direction, what fascinates me more are musical choices and verbal nuances that Stemme makes as she continues to grow her artistic conception of the role.

Laufenberg’s production, new in Vienna when Stemme sang her first Elektra, posits some thoughtful ideas regarding the character’s sexual ambiguity as a means of conveying her alienation.

At the beginning of the opera, Stemme is dressed in a man’s suit, and uses jarring and ostensibly male body language to express rebellion against the members of her dysfunctional household. The Laufenberg Elektra is not so much damaged and demented, but rather a brooding and rebellious outsider.

Only later in the recognition scene with Orest do we see Elektra shifting gears. After a controversial portrayal of incestuous affection, Stemme removes her suit to reveal a simple black dress, and her body language softens—perhaps an indication of the character’s first brush with tender love.

Musically, Stemme’s first vocal account of Elektra was thrilling. Her vocal power and stamina are impressive, and her textual precision and word painting impart a great deal of dramatic verisimilitude to Strauss’ jagged musical lines. The first thing that strikes me as special about this Elektra is the Lieder like quality of Stemme’s singing, but of course with dramatic singers such vocalism is underpinned by greater amplitude.

On the whole, this Elektra reminds me of her studio Isolde with Antonio Pappano—a dramatically alert and musical reading that is on many counts inspired, but not on the same level as the latter performances that would find her at a more ideal crossroads between vocal and artistic maturity.

Stemme’s next Elektra would take shape at the Metropolitan Opera in Chereau’s much celebrated production. Chereau imagines the Aeschylean drama as a subtle psychological projection of the character’s psyche. Stemme’s Elektra here begins already damaged, her interactions with her family marked by a stark, twisted nerve like aggression.

I remember being astonished in the theater when I witnessed how the late director’s concept played on the most finely graded gestures and physical interactions—a contrast from the normative larger than life treatment we expect from the opera’s performance annals.

In this production, Stemme’s vocalism acquires a more conversational, subtly shaded quality. If her performance in Vienna was more extroverted and in line with the conventional big dramatic soprano sing, what she achieves with Salonen is an expressionistic, musically rich reading that emphasized the Lieder like aspects (such beautiful piani throughout!) of the score to an even greater degree than her work in the Laufenberg.

And how powerfully Stemme, Chereau, and Salonen build up the humanity of this drama—the Elektra-Klyt?mnestra confrontation has rarely invited such empathy for both characters, nor has the climactic buildup to Elektra’s catatonic, internal death felt so harrowing. I left the theater dazed, staring out into the Lincoln Center plaza much in the same way that Elektra stared blankly into space at the opera’s end.

Stemme’s latest Elektra is currently ongoing in McVicar’s production at the Lyric Opera. If McVicar’s concept is more traditional, there is an advantage to using such a carte blanche for an operatic cast of this theatrical caliber.

There are two things that make Stemme’s current Elektra a revelatory experience. Her voice has become richer and more seamless in the years since she first undertook the role in Vienna. The delicate, diamond like brilliance that I remember from those first Elektras now is replaced by a columnar instrument with a warm, ruby-rich glow.

The jagged vocal lines thus acquire a bit more bite and depth, and the outbursts carry sufficient power to reverberate about the normally challenging acoustic of the Lyric Opera auditorium. Her control in executing hairpin shifts in dynamics is just as impressive—an asset in music that carries such a broad palette of moods and colors.

Additionally, in a production that isn’t governed by a particularly dominating directorial personality, Stemme is given free reign to use her theatrical instincts in defining her interactions with the other characters. As much as I loved Chereau’s treatment of Elektra and Chrysothemis’ relationship, I found the tender moments between the sisters more touching in the McVicar.

But nothing in the performance quite compares with what Stemme and Iain Paterson were able to achieve in what is possibly my favorite Recognition scene in any medium. Here, both singers were vocally and physically attuned to Strauss’ score, their dialogue rendered with such fine musicianship and attention to theatrical detail.

Stemme’s remarkable vocal performance also made me pay closerattention to the more reflective moments in this scene. I don’t recall being quite as moved by any other Elektra as when Stemme recalls the character’s now withered beauty.

If the feeling that I took away from the Chereau production is one of dazed wonder, I came out of the McVicar feeling utterly moved by Strauss’ great score. Both are equally valid reactions to performances of an opera as powerful as Elektra, no doubt inspired in great part by the outstanding artistry of Nina Stemme.