Yannick Nézet-Séguin’s “Music of Faith” with the Philadelphia Orchestra was a sensational concert, perhaps the best I’ve heard in more than a season. 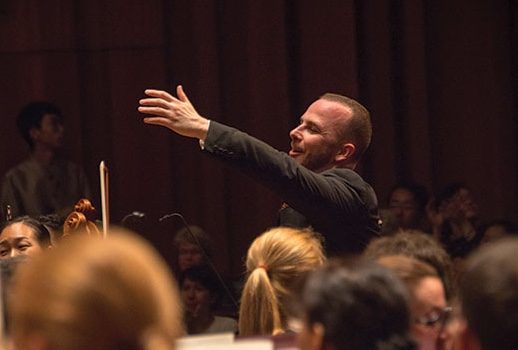 First, the takeaway: Yannick Nézet-Séguin’s “Music of Faith” with the Philadelphia Orchestra was a sensational concert, perhaps the best I’ve heard in more than a season. Intriguingly juxtaposing two similar-but-very-different works composed 120 years apart—Bernstein’s Symphony No. 3 (Kaddish) and Rossini’s Stabat Mater—the maestro and his excellent collaborators were in tip-top form.

Though categorized as a symphony, Kaddish is difficult to define in a formal sense. In terms of forces—orchestra; two choruses (here, the Philadelphia Symphonic Choir, directed by Joe Miller, and the Philadelphia Boys Choir, directed by Jeffrey R. Smith); soloist (soprano Nadine Sierra); and a speaker (Charlotte Blake Alston)—it more closely resembles a large-format oratorio. The point is made clearer in its juxtaposition here with the Rossini.

Its title, of course, evokes the traditional Hebrew prayer for the dead. That prayer is indeed incorporated into the work, but Kaddish is more famous (or infamous, depending on your reaction) for its secondary text. Written by Bernstein himself, it introduces a kind of partnership between the voice of the scripture and a presumably contemporary observer.

Perhaps in dreaming, I can help You
Recreate Your image, and love him again…
We can still be immortal,
You and I…

Bernstein’s words are clearly meant to humanize the Kaddish and make it more accessible. Effectively, though, they turn it into an exercise in narcissism. It’s as if the composer walks side-by-side with the almighty, offering the Deity a helping hand. (Or as I pictured it, God and Lenny were huddled together, heads bowed, kibitzing in a booth at the Russian Tea Room.)

For better but mostly worse, Kaddish is dominated by the interplay between the two texts. Too bad, because Bernstein’s narrative grows increasingly pompous and tedious by the minute, its grandiosity more likely to induce giggles than pious awe. (“Your two-footed handiwork” is a particular howler.)

Too bad also, because if you could ditch the narration, the work musically is one of the most persuasive examples of Bernstein as a “classical” composer—or more accurately, one who mixes a jazzy idiom and  his signature, ragged rhythmic vitality with concert-hall breadth. Not for a second is there any doubt as to the composer’s identity. Kaddish is pure Bernstein, especially in the frisky music for winds. And (as long as nobody is talking), it’s often magical.

Here, at least, Alston, a beloved Philadelphia storyteller, brought dignity and understatement to the narration. She is also a black woman, which added a welcome sense of inclusion to what can seem like a hermetically sealed world of white male navel-gazing.

Musically, too, it would be hard to imagine a more compelling interpretation. Sierra nailed the ethereal, high-lying prayer, and had a lovely amber color in her lower lines. The orchestra played with exceptional vigor, and both choruses were splendid. Yannick brought the entire work, nominally a memorial, to vibrant life.

Compared to Kaddish, Rossini’s setting of sections of this celebrated Christian hymn is pretty straightforward. But it, too, is a quirky work, notably in straddling piety and operatic glamor. Each of the four soloists has a killer aria (the soprano’s “Inflammatus,” with its ascending trills and two high Cs, is a real showstopper), alongside more traditionally somber sections for the quartet and a chorus.

Yannick was at his considerable best here—propulsive when needed (“Inflammatus,” most of all); but more importantly, thoughtfully shaping the work with exceptional subtlety. Together, these forces made the best case I’ve heard for Rossini’s highly theatrical work as a profound expression of belief.

This was lived out in many details, including the exceptional coordination of the quartet singing (Sierra was again the soprano; the others were mezzo Elizabeth DeShong, tenor John Osborn and bass Krzysztof Baczyk).

Baczyk’s “Pro peccatis” was leaner and less grandly sweeping than some, but steady and musical, and he was superb in the quiet back-and-forth conversation with the chorus in “Eja mater.”

Sierra, lovely in the more lyric sections, lacked both the expansive top and the general oomph for “Inflammatus,” but she handled all the ornaments neatly. (Really, all the soloists did.)

But DeShong’s performance was for the ages. In “Fac ut portem,” the upper range rang out brilliantly, while the lowest notes—this mezzo’s special glory—rolled out like waves of molten gold.

Don’t take my word for it. The woman sitting next to me actually stopped knitting during “Fac ut portem” and simply listened.

If that’s not faith, what is?