Jules Massenet’s version of the Cinderella fairy tale, Cendrillon, seems to be back in vogue after many years of obscurity. 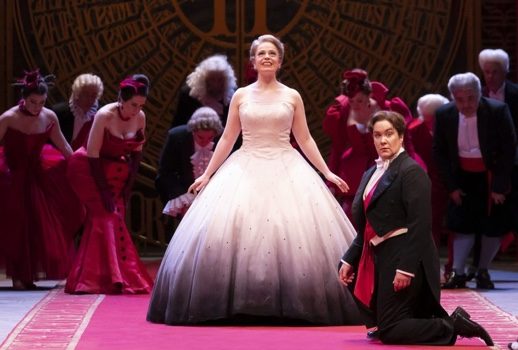 Jules Massenet’s version of the Cinderella fairy tale, Cendrillon, seems to be back in vogue after many years of obscurity, and the major reason for the revival of interest is the spectacularly inventive Laurent Pelly production already a hit in Santa Fe, London, Brussels, Lille, Barcelona, the Met, and now running in its first performances at Lyric Opera of Chicago.

The show also sports a strong cast of fine singing actors, brilliant choreography by Laura Scozzi (revival choreographer is Karine Girard), ten solo dancers, storybook sets by Barbara de Limburg, and Pelly’s own colorful and gloriously quirky costumes.  As seen on the matinee of December 5, it was an enchanting and delightful afternoon.

There was a wonderful sense that everyone—director, chorus, dancers, principals, orchestra—were all on the same page and everyone seemed to be having a grand time, including the audience.

I can’t say that Cendrillonis one of my favorites of Massenet’s scores, but it sounded quite lush under Sir Andrew Davis’ masterful hand and the wonderful playing of the Lyric Opera Orchestra.  Since the end of the strike at the start of the season, the love affair between the Lyric audience and the orchestra seems to have deepened—the musicians earned major ovations at the start of every act.

Pelly’s detailed direction keeps the action moving forward, always in an interesting way.  He manages the extraordinary feat of moving the production seamlessly from farce to romance to drama—sometimes within the same scene.

Much of the first two acts is hilarious, with the haughty Mme.de la Haltiere (an outrageously bustled Elizabeth Bishop) trying desperately to train her two daughters Noémie (Emily Pogorelc) and Dorothée (Kayleigh Decker) to proper behavior for the Prince’s ball.

Yet the second half turns sentimental and dramatic, with a lovely Father-Daughter scene between Pandolfe and his daughter Lucette (Cendrillon) that reminded me of the sad father/daughter duet in Verdi’s Luisa Miller.  This scene provided Massenet’s most moving musical moments.

Australian soprano Siobhan Stagg makes a terrific American debut in the title role, singing and acting with unaffected charm and grace. She develops a character imbued with loneliness and hope at the same time, innocence confronted with love at first sight.  Her potent, silvery voice brought a touching vulnerability to her moving Cendrillon.

Mezzo Alice Coote was a stirring Prince, moving effortlessly from a bored and decadent boy to a man desperately in love with a stranger.  Coote was vocally and histrionically superb.

Bishop earned the biggest laughs of the afternoon, her rich and robust voice declaiming the stepmother’s hilarious disdain of her husband and all who failed to match her noble descent.  Decker and Pogorelc as her daughters played the farcical scenes with physical versatility and vocal charm.

Derek Welton, making his American operatic debut as Cendrillon’s father Pandolfe, found the real sweet spot in the scene where he laments to Cendrillon his decision to marry into the nobility and his desire to return to their simple life in the forest.  It’s touchingly simple and simply touching

The remarkable French-Canadian soprano Marie-Eve Munger was a tremendous Fairy Godmother, tossing off high-flying coloratura with ease and precision.  She was always authoritative, and moved beautifully in her sparkly sheath.

Great credit must also go to the wonderful dancers, who made even the overly long second act dance of the Prince’s suitors entertaining.  And the Lyric Opera Chorus was splendid, acting, singing and moving with style and verve.

The second half of the opera loses a bit of steam, as the scenes become less crowded and more personal.  But even here, Pelly moves the production to touching drama as we wait for the lovers to be finally reunited.  Bubbly confection becomes moving romanticism.  Stagg and Coote convince as love-at-first-sight becomes a coupling deepened by adversity.

I did find a discordant note in the second act scene where the various noble ladies are paraded before the Prince to his horror.  Was the kingdom really made up entirely of vulgar, hopeless women, dressed to the nines in relentlessly red costumes.

I was particularly startled by the older woman who appeared to be dressed as a scarlet chicken.  No wonder the Prince was single!