I wondered if there truly is a future for opera other than as an overpriced museum piece for an aging audience who likes their sets lavish, their productions non-challenging, and their singers telegenic. 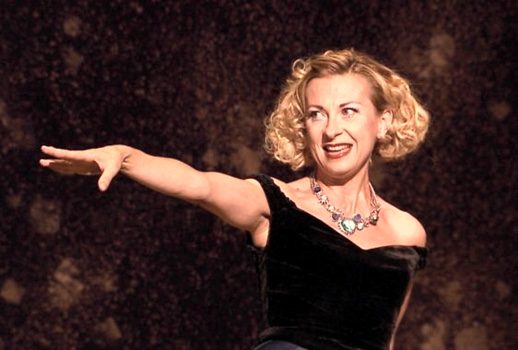 In the wake of all the discussion of the Met’s new production of La traviata, a major setback to live opera on all fronts, I began to wonder if there truly is a future for opera other than as an overpriced museum piece for an aging audience who likes their sets lavish, their productions non-challenging, and their singers telegenic.

That concern set me to searching and thus I came upon the 2011 Dessay-Tessier-Castronovo Traviata from Aix-en-Provence.

Ladies and gentlemen: there is hope.

The Aix Traviata was not universally admired. Particularly the Anglophone critics found it “meh,” messy and underwhelming. Natalie Dessay was acclaimed as an actress and damned with faint praise for her voice and musicianship.

There. I said it. Now let me tell you why. However, I won’t be plodding scene by scene or pose as a music critic. I’m just going to hit my personal high notes.

Opening premise: “All the world’s a stage…”

The players stroll onto the outdoor stage of the Théâtre de l’Archevêché wearing casual clothing, the cast assembling for the performance or early arrivals at a party that hasn’t gotten started yet. Point Number One: There is no existential difference between a theatrical performance and a demimondaine party.

While stagehands sprinkle glitter on the floor and lay out props, Natalie performs her maquillage, as bright and shiny as moonlight in a martini (to quote opera-struck Moonstruck). She is the life of the party, bejeweled and jaded. In walks tall, dark, and handsome Alfredo/Charles Castronovo, impossibly open and ardent.

The stage is set for the tragedy. Note: the metaphorical “stage” is “set” by the unfolding emotional contradictions of the characters, not by chandeliers, gaudy costumes, a small zoo, or stock operatic gestures.

There is something to be said for verisimilitude. Having a mercurial and fascinating Violetta and a handsome, jizzy Alfredo are distinct assets in putting the drama across. Dessay and Castronovo bring all that messily wrapped in charismatic stage presence. The acting is so finely nuanced and deeply felt that the whole affair (even though I’ve seen it a million times) felt spontaneous.

Point Number Three:  That feeling of spontaneity arises from perceived unpredictability. We are not comfortably plopped into the familiar; we are uneasily perched on the catbird seat for an unfolding series of psychic surprises. I literally didn’t know what to expect next.

Like life, this production is full of easter eggs. (Spoiler: no glass or bottle breaking in the “Sempre libera.” The scene is an arc of realization, the emerging interior  landscape of a complex and enchanting woman torn by fear and desire.)

Because this production isn’t about conclusions; it’s about questions. It isn’t about product, it’s about process. This stage is a tabula rasa upon which emotional realities are projected. It routinely disappears, as it should, eclipsed by the spotlight on two human beings struggling to unravel their fate.

The physical stage is the bridge to an emotional truth toward which we are constantly directed. The blocking, the attention to facial and gestural detail, and the coordination of the action with the music are finely nuanced to a degree not often seen these days in certain other very big places. (Bouquets of kudos to conductor Louis Langrée.)

As for surprises, director Jean-François Sivadier excels in making the most of generally underserved and taken-for-granted moments (check out the “dei miei bollenti spiriti” for an object lesson in conjuring magic from a usually park-and-bark moment par excellence).

The surprises are surprising because they go against the grain of expectation and experience. The much-criticized visuals of the production (as in Willy Decker’s) focus the audience on the essential instead of dazzling the eye with lurid stage pictures and pressing kitsch buttons.

As Violetta sings “Addio del passato” a stagehand behind her slowly erases “Traviata” and “Violetta” that are scrawled like graffiti on a black cyclorama no longer spangled with glitter. It is a balletic gesture congruent with Violetta’s addio. Her death, here, is like no other, which is as it should be, every time.

Dessay delivers on so many levels that I find it hard to separate out the voice and address her singing per se. Besides, I’m not qualified. I only know what I like. This performance, which overwhelmed me, was comprised not only of the movements and the instincts but the instrument as well.

All were of a piece, thoroughly integrated and inseparable. How often can you say that? Castronovo was the perfect Alfredo for this Violetta. He had the moves, the bright ardent timbre, and was heartbreaking in his disappointment, anger, and loss.

Tezier is less an actor than his stage partners, thus his movements were minimal and controlled, maximizing the vocal reveal of  a stilted and stuffy bourgeois father overwhelmed, won over, and anguished by the magnitude of the sacrifice that Violetta is willing to make in the name of love. Dessay’s transitions throughout the duet are breathtaking.

That’s all I care to say. You’ll have to see it to decide for yourself, but if you love La traviata I know with certainty you will be glad you saw this one.