Death be not proud 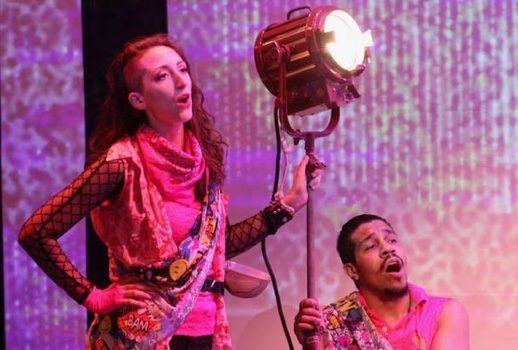 The New Camerata Opera is a small company that performs in the Flea Theater, a performance space a few blocks from City Hall. Their current project (through Sunday) is a double bill of John Blow’s Venus and Adonis, sometimes dubbed the first English opera, and Gustav Holst’s Savitri.

Aside from small forces deployed effectively (and a woodland setting), what these works have in common is the English language applied to stories derived from foreign mythic material: On the one hand a Greco-Middle Eastern myth derived through Ovid’s Metamorphoses, and on the other a Hindu folk tale derived from the Mahabharata. “Cultural appropriation” could well be another name for opera!

Venus and Adonis is as much masque as drama, and was designed for display at the court of Charles II; the original production, around 1683, starred one of the king’s mistresses as Venus and their daughter as Cupid. (Cupid is a long part; Lady Mary, who was ten, must have been a talented girl.)

The piece is exemplary because, though the music is pleasant, the librettist cannot figure out how to vary the textures of a simple story so that the characters and their conflicts have a deeper meaning for us—as, just six years later, Blow’s pupil Henry Purcell (and Nahum Tate) managed to do in Dido and Aeneas. Still, Blow’s music has its own charm and it’s good to hear the earlier piece now and then.

Asa Benally’s costumes gave Venus and Adonis a pink punk theme: torn jeans, woolly masks, bottles of beer. It’s hard to tell the shepherds from the sheep, as they double their rowdy roles, carousing and caressing. The direction, by Jennifer Williams, did succeed in distracting us from the overture.

But the mood became more respectful of the music with the entrance of plump, pink Cupid (Julia Cavallaro) and the accidental wounding of his goddess mother (Barbara Porto) by one of the boy’s fatal arrows. Adonis (Scott Lindroth) wore black leather epaulets and many a classical zipper.

The musical texture of the piece was pleasing, owing to both the chorus and the small group of instruments led by Stephen Fillare. Cavallaro’s Cupid, an overgrown brat, sang prettily but the only singer who displayed brilliant gifts was Porto as Venus.

She has a large soprano that filled and on occasion shook the room, but its size and her style of production both seemed more suited to nineteenth-century opera than to early music. The effect was rather like Flagstad’s Dido: enjoyable, but we’ve past that stage now.

Venus and Adonis was probably first given in a chamber within the palace rather than a theater, and Flea Theater’s upper room is the proper size for it. This is also true of Gustav Holst’s 1916 work, Savitri, a sort of “Wagnerian” chamber opera, designed for “a small room or the open air.” The orchestra of 12 would be hard to reduce; the cast consists of three singers plus a small female chorus, who are sometimes seated among the orchestra (though not at New Camerata.)

Saviri was presented in a more restrained style—for one thing, the costumes of this Indian tale were recognizably Indian. Besides graceful movements inspired by the postures of classical Indian dance, Yee Eun Nam’s attractive electronic backdrops (multicolored leaves falling against a distant wood, that sort of thing) maintained a scenic busyness while the formal attitudes of the singers suited the stately declamation of their singing.

The story is about Death, personified this time (by Angky Budiardjono), who comes to collect a fearless huntsman, Satyavan, sung and postured by Daniel Ambe. But Satyavan’s wife, Savitri, sung by Samina Aslam, though fearful enough, is also quick and clever.

While a veiled, singing chorus covers Satyavan in a shroud, Savitri stands up to Death, inviting him in and offering him hospitality, until he is suitably impressed—no one, especially no woman, has ever treated Death like this. (In one version of the story, she even asks him to become her Guru, which is quite an honor.)

The vocal fabric is constructed in a reserved declamatory style familiar to us from the “conversations” of Siegmund and Brünnhilde in the Ring or of Bacchus and Ariadne in Strauss (though Ariadne was then brand new and unknown to Holst). In all three cases the subject is life, death and what happens after, and this gradual, ritual building of grave emotion suits the characters and the stories under discussion.

Thus the requirements of the musicians are especially demanding in Savitri, and the three New Camerata singers are exceptionally good, personality and drama characterizing their delivery, the power of their vocalism easily filling the theater.

Ambe’s tenor rang out with youthful ardor, and Budiardjono’s bass-baritone had the dignity of his archetypal message, while Aslam’s low and gracious soprano was especially thrilling, earth-mother and warrior heroine together.

All three gave the impression of having plenty in reserve should grander parts come their way, and the company that can offer them to such advantage is welcome on the scene. Maestro Fillare led the orchestra to a finely-arched feat of moody storytelling.