Give the creators credit for producing an emotional response. 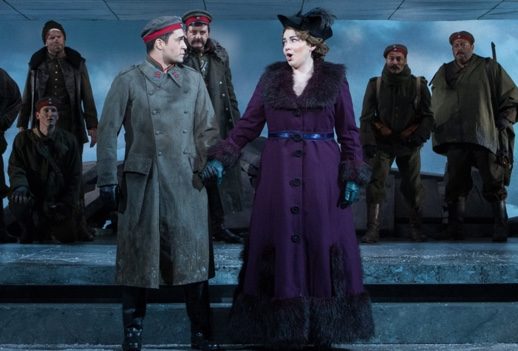 The Christmas truce in 1914, an impromptu and unofficial laying down of arms in favor of camaraderie between soldiers on both sides (or several sides) of the Great War, was an actual event or series of small events, but it is also a myth, real events given magnitude and coherence by repetition and artistic gloss.

One such gloss was a movie, Joyeux Noël, written and directed by Christian Carion in 2005. Carion invented characters and stories, such as a German opera singer fed up with the war who walks into No-man’s-land singing, thus starting the truce. He even tossed in the singer’s girlfriend, a Danish (hence neutral) opera singer, who joins him to entertain the troops.

The filmmaker might have been begging some composer or other to put this on the lyric stage (opera singers as archetypes of courageous peacemaking! Who could resist that?), and when librettist Mark Campbell (following the screenplay) and composer Kevin Puts did so with Silent Night, in Minneapolis in 2011, they not only won the Pulitzer, they had a genuine hit on their hands, with productions following around the country plus Winnipeg and Wexford.

I caught up with it at the nearly sold-out Washington National Opera presentation last weekend.

Several film critics objected, when Joyeux Noël appeared, that the story was sentimental claptrap about complex historical events. But sentimental claptrap, which may undermine the realism of a movie, is often just the ticket for opera, where realism is dubious anyway. The music and the singing archetypes render us emotional; we can let realism go hang and surrender to another sort of truth.

I resented the tug on precisely this sentimental heartstring, the way the opera singers conquered the brutality around them, the way news from home arrived just when it ought to or had to, the way the least hateful and least offensive of the characters was the one who had to be shot. But give the creators credit for producing this emotional response. In an opera house, this is no unwelcome thing.

Puts’s score includes a great deal of pastiche—duets from the Mozart-ish opera the lovers are singing in the opening scene when war abruptly breaks out, Scottish bagpipe songs, Christmas carols, lieder in duet. We simply can’t have pastiche in a serious opera—what next? Drinking songs or sailors’ chanteys in the midst of a romantic tragedy? Why, it’s unseemly. He does it so well, too.

Of the unpastiched music, none of it harsh to the modern ear, there was a wonderful scene of mutual serenades, underscoring for the occasional phrases of the cold and weary soldiers, that was lovely without calling on any exterior music, tangy and moody. And the libretto did its proper work of keeping us involved, on the edge of our seats, tense as people threatened to shoot one another, as bitterness did not quite conquer an innate humanity.

All this is calculated and unreal, a fabulous Great War with only a notional connection to the actual experience (prima donnas entertaining the troops in the trenches? That’s some other war).

The drama would not work as a musical experience (in its three or four languages) without surtitle technology to open the stories to us; we could not sink into the musical fabric and let verbiage go hang (as we can in traditional opera), when the diverse emotions being stated, rather than the music, provide the emotional point of the drama.

The acting of the large cast was excellent (the director was Tomer Zvulun; the chorus master Steven Gathman), but they had to play the emotional piano, as it were; the composer did not create such subtleties. You could not simply hear the music and understand the work.

The WNO set (by Erhard Rom—already seen at Wexford, Glimmerglass and Atlanta) is on three levels, depicting the camps of the Scots, the French and the Germans. It might have been more realistic to make the action all male, but hell, Benjamin Britten already did an all-male war opera.

But if we’re going to have a prima donna in the story, however unlikely her behavior, let her sound like a prima donna. In D.C., she sure did! Raquel González in the role of Anna Sørensen poured out oceans of creamy mezzo-soprano tone at us, providing the notion that we were actually attending an opera.

Her partner in pastiche, Nikolaus Sprink, was sung by Alexander McKissick, whose pleasant tenor is—must be—a bit more restrained. He has more acting than simple vocalizing to do, but his clear, sweet sound was certainly an asset, besides making his occupation credible.

The other performers sang less “vocal” lines, required to act and exclaim and threaten and joke in arioso, in a style familiar from the operas of Britten and Carlisle Floyd.

The WNO orchestra was led by Nicole Paiement, visibly moved by the drama as she conducted it, making the most of its more musical scenes and holding the story together movingly throughout the afternoon. She seemed emotionally wrung out by the conclusion herself.

The widespread success of Silent Night implies the work’s message, that war is some alien lumbering beast fought by good guys on all sides who would all rather be doing something else, is one with nationwide appeal. That the source is French implies a similar feeling there.

It does not have much to say about the tremendous enthusiasm with which the nations of 1914 went to war in the first place, uncomprehending but mostly delighted. The surtitle-dependent style of Silent Night does not seem to me a manner of opera with appeal for the lover of old-fashioned musical or vocal drama, the exploration of emotion and story by musical means.