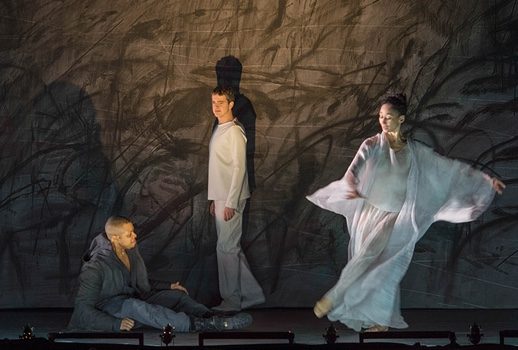 Opera, it’s been said many times, is a generous genre, one that stretches to accommodate myriad techniques and traditions beyond the confines of Western music. But last weekend at Lincoln Center’s Rose Theater, audiences were given the chance to test that theory with a brilliant production that prodded the medium’s limits with a samurai sword.

The opera, which premiered in Amsterdam two years ago and has since been reworked for other venues, is based on two separate Japanese Noh plays that were translated early last century by Ezra Pound.

The show finds its continuity in the theme of evanescence, those fleeting relationships forged between material and spiritual worlds, a stock trope in Muromachi-era Japanese art. In Pound’s hands, both one-act miniatures use sparse language to explore contact with the supernatural, yet each highlights a different emotional facet of the encounter.

Always Strong (Tsunemasa), the opera’s shadowy first act, relates the tale of a monk in the Japanese imperial court (bass-baritone Davóne Tines) who makes devotions to the deceased warrior and lute-player Tsunemasa (countertenor Philippe Jaroussky). After the monk offers up his lute, the warrior appears to him as a young ghost, and sings of the life and music he once held dear, but lost.

The narrative itself is simple enough, but makes galaxies out of few words. Against a no-frills scrim dashed with sumi-e ink sketches—the modest, impactful handiwork of set designer Julie Mehretu and lighting designer James F. Ingalls—the two characters maneuver onstage lamps as props and cast shadows of themselves, reconfiguring their own dimensions as they make sense of their feelings.

The effects can be frightening: the shadow of Tsunemasa, for instance, can appear either monstrous and gargantuan or loving—a slip in the night, or rather like a devoted friend who helps the monk grieve.

Also featured are four vocalists who perform from among the musicians and who add, like ghostly echoes, shadows of their own to what’s happening onstage. In order to amplify the effect, the production digitally manipulates the sound and has miked the performers. I never found any of these mechanics obtrusive.

Sellars has, over a fabled career, already proven himself a master of soldering diverse cultural idioms on the operatic stage; this production is no different, and is refreshingly true to the customs of Noh drama. Characters rarely express themselves through much movement, and feelings tend to skew subtle. Yet the director has found gentle ways of generating meaning from Pound’s symbolism.

Costumes by Robby Duiveman, a palette of grays and blacks, also provided dusky intensity, and suited the wispy, magical effects conjured by the spirits onstage.

The second act’s Feather Mantle (Hagoromo) brings more action to the arena in the form of a run-in with a whirling “Tennin,” or moon spirit. In one of Noh theater’s most celebrated legends, a fisherman (played by Tines) discovers a feather robe on a branch and tries to make off with it.

But when the Tennin (a radiant Jaroussky) appears to ask for it back, he won’t acquiesce unless she performs a celestial maiden’s dance for him.

The second act especially showcased the best of both Tines and Jaroussky, both of whom had participated in the Dutch National Opera’s production. Tines, a muscular presence with a burnished sound especially appealing in its lower depths, gave great dignity to the monk’s expressions of loss. And Jaroussky, although sounding a bit raspy on the night I heard him, proved a captivating, intelligent countertenor who also remains very versatile.

As in the DNO staging, Brooklyn-born dancer and choreographer Nora Kimball-Mentzos reprised a dancing avatar of the moon spirit in this production, bringing graceful energy to the more rhythmic moments of the score.

Saariaho and Sellars have been careful in all this to keep things intimate and small-scale. But I found myself wondering how well a Noh opera would play to a larger venue: this would be a compelling piece to experiment with in Lincoln Square, for example, where the rich, electronic reverb of vanishing spirits would finally have not just a back row, but also a sky-high rafter to depart to.