This program honored the singer, composer and theorist Giulio Caccini, “Giulio da Romano,” on the 400th anniversary of his death. 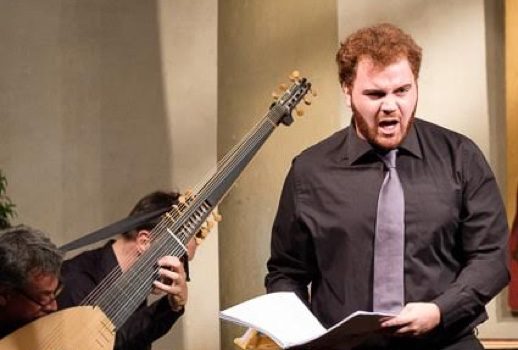 The House of the Redeemer is a convent in the former Fabbri mansion on East 95th Street, its library taken from a palazzo in Urbino. The room is therefore about the right size (say, two pre-war Manhattan living rooms) for chamber concerts. The concert last Friday night of the Ensemble Ricercare Antico, four Italian instrumentalists and a tenor, Riccardo Pisani, was part of the Salon/Sanctuary Concert series, who present music of various eras in properly atmospheric venues around New York and Florence.

This program honored the singer, composer and theorist Giulio Caccini, “Giulio da Romano,” on the 400th anniversary of his death. In the late cinquecento, he was renowned throughout Italy as, well, a singer-songwriter (usually accompanying himself, on harp), and for bringing the expressive devices of madrigal to the solo voice. This was another piece in the evolving machine slouching towards Mantua to be born as opera.

Not only was Caccini a famous singer, beloved of his Medici employers and sought after by other Italian courts (public theaters for musical drama were, of course, a thing of the future), and a composer who produced a Euridice to rival that of his contemporary, Jacopo Peri—whose music he may have plagiarized for it—he was also the author of a brief but remarkable treatise on affetto cantando, passionate singing.

He set verse strophically or as declamation, with illustrative ornament, and one can hear how this became the model for both aria and recitative.

Preening on the advance he represented from the harmonies of madrigal, Caccini wrote:

Since such music and musicians offered no pleasure beyond that which pleasant sounds could give—solely to the sense of hearing, since they could not move the mind without the words being understood—it occurred to me to introduce a kind of music in which one could almost speak in tones, employing in it a certain noble negligence of song, sometimes passing through several dissonances while still maintaining the bass note, save when I wished to do it the ordinary way and play the inner parts on the instrument to express some effect.

Extend that to more than one character acting a story and you’ve got the whole megillah.

In other words, while singing a melody in a single voice (providing with accompanying strings), Caccini would emphasize the the text by acting it, perhaps playing with a single word musically to produce an onomatopoeia or an intensification.

There were effects when Pisani sang these verses last Friday of wind and storm, of pain in suffering love, of time drawn out and life cut short, in the twisting or extending or coloring of  a significant word or phrase in a style that might seem naïve if it were not so beautiful, so genuinely musical, so sophisticated a part of the poetry and the musical line.

A hundred years later, singers would turn such devices into showpieces for the voice alone and let the poetry go hang; the intention from the beginning was to enhance the meaning of the experience expressed in the word.

The Ricercar ensemble, which consists of three string players and a recordist, has been touring Europe, Mexico and America for some months to celebrate Caccini’s anniversary.  The treatise has been studied by these musicians, and the tour has presented their conclusions.

The program at the Redeemer library consisted of solo songs—arias, in fact, but that word calls up opera, and opera did not yet exist—by Caccini and such contemporaries as Filippo Nicoletti and Girolamo Frescobaldi, besides instrumental interludes of the same era and style with a recorder, wielded by Serena Bellini, taking the position of the voice, permitted to toy with the melody over some combination of the stringed instruments (can you tell an archflute from a theorbo? Neither can I; theorbos are longer).

The gentlemen on the strings were Giovanni Bellini, Matteo Coticoni and Francesco Tomasi.

Pisani’s robust, dark, sizable, easily produced tenor is closer to the sound we associate with nineteenth-century romantic opera than with Early Music (soi-disant). His career, which began as a boy soprano with church music, has been focused almost entirely on music composed before 1700.

Unsurprisingly, his operatic roles have included Monteverdi’s Ulisse and Orfeo, but also the Sailor in Purcell’s Dido and Aeneas, as well as operas by Cavalli and Melani. He brings resonance, clarity and ideal diction to the table—if you are at all familiar with Italian song literature, you hardly need translations to understand him, as the vocabulary has barely altered in the centuries between this formal court poetry and the amorous complaints of Italian romantic and, for that matter, pop literature.

What made Pisani’s interpretations particularly interesting (and drove me to study the texts and translations provided) was the style of ornament. We know the goat-trill from Early Music performances of Monteverdi’s operas, but Pisani made little use of it.  He was more inclined to swell a meaningful word to give poignance to a line or a figure of speech, to draw out a word like pena or tormentar, dolor pungente or dolce foco di rubini into reticent melisma, to murmur on mormorar, to quaver on rozze note,  to depict some meteorological phenomenon while setting the scene of a metaphor for heartbreak.

He exults when he invokes the goddess of music, “Odi, Euterpe, il dolce canto,” but then, he’s earned the right to do so. So did Caccini.