Just over a month ago the great Catalan soprano Montserrat Caballé died at age 85. 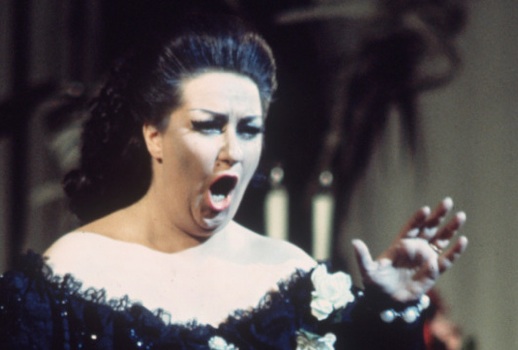 Just over a month ago the great Catalan soprano Montserrat Caballé died at age 85. “Trove Thursday” joins many other salutes with a recording of one of her fabled early NYC bel canto concert appearances – in 1969 she sang Alaide in Bellini’s La Straniera for I believe the first and only time.

Many know that although Caballé had been singing opera for nearly a decade her international breakthrough came replacing Marilyn Horne in Donizetti’s Lucrezia Borgia for the American Opera Society in Carnegie Hall in 1965. Over the next four years, she returned to perform with that group five more times before it folded in 1970.

This Straniera was her final AOS appearance; it was preceded by Roberto Devereux, Il Pirata, Giulio Cesare, and Maria Stuarda, the final opera co-starring Shirley Verrett. Recordings of all of these performances exist but this Straniera is among the more elusive; the least good—the Handel—is ironically the most easily available. One wonders why given Caballé’s fame as Norma and Imogene she never returned to this Bellini opera.

Of Bellini’s mature works, Straniera isn’t done often but perhaps more regularly than Beatrice di Tenda and certainly Zaira.Although Bellini fussed about the tenor role hoping that Rubini would appear in it in the work’s premiere, it has become a diva vehicle. Rubini did sing Arturo in a later revival for which Bellini raised the tessitura.

In addition to this sole Caballé performance, Alaide has been taken up by sopranos as diverse as Elena Souliotis and Carol Neblett to Patrizia Ciofi and Annick Massis. Renata Scotto appeared in several Italian revivals, and a recent Vienna stage production saw Edita Gruberová alternating with Marlis Petersen. Twenty-four years after Caballé, Straniera returned to Carnegie Hall with Opera Orchestra of New York and Renée Fleming as the Stranger.

Of Caballé’s noted colleagues here, Casoni never sang at the Met while Zambon made just a single appearance—as Manrico in 1978. Sardinero fared hardly better the year before: just one role—Marcello in La Bohème–which he sang three times in the house followed by the spring tour.

A second and perhaps even a third Caballé live performance will follow on “Trove Thursday” in 2019. Next week, a double-bill with two electrifying contemporary divas.

Straniera can be downloaded by clicking on the icon of a square with an arrow pointing downward on the audio player and the resulting mp3 files will appear in your download directory.

Over 120 other podcasts also remain available from iTunes for free, or via any RSS reader.