The New York Gilbert and Sullivan Players (NYGASP to its friends) is giving Sullivan’s most operatic score a dusting off (or should one say dusting-up?) at the Kaye Playhouse at Hunter College. 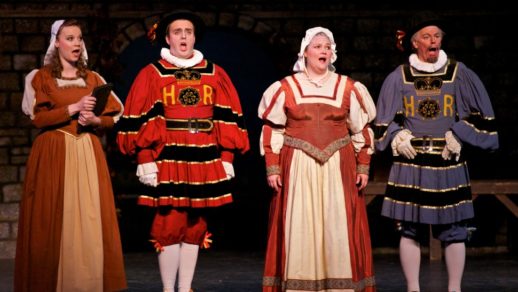 It’s a lucky thing the Tudors are long extinct; there’s no one to protest the High Victorian cultural appropriation of The Yeomen of the Guard.

The New York Gilbert and Sullivan Players (NYGASP to its friends) is giving Sullivan’s most operatic score a dusting off (or should one say dusting-up?) at the Kaye Playhouse at Hunter, with all the score’s frequent cuts opened and every number in place, costumed and staged as if nothing had changed in one hundred and thirty years.

Some people may find this cozy and predictable sort of staging immensely soothing. The only concession to modern taste  is a certain athleticism of David Auxier’s choreography, which the choristers ably achieve.

There is a full-ish orchestra, 26 persons by my count, and if they are not ideally smooth (and the timpani could tone it down in the splendid overture, eh?), they do give some indication of Sullivan’s wizardry, his delicate contrasts of rushing strings and lithe, gliding winds. They are led by company founder and director Albert Bergeret, who slows the pace in performance whenever a soprano has coloratura to work out of her system or a merryman has to twist his tongue through a patter.

For those who do not know it, Yeomen is a bit like Fidelio and Dalibor, a prisoner unjustly jailed, unseasonably loved, and ripe for execution, except a strolling chanteuse and jester combo wander into the middle of the action. There’s an unexpected (and blindfolded) wedding followed by a jailbreak for Fairfax, a dubious character but the tenor and therefore the hero, and then (the escaped but married Fairfax having become a nuisance) a fake assassination to get him out of the way.

Even Gilbert can’t quite plot his way out of this clearly, but he figures you won’t notice as long as everyone gets married, however improbably, at the final curtain. That leaves the jester, a pickle-faced and sarcastic fellow, to reveal—too late—that he, too, has a heart, and the denouement has broken it.

It is a great truth of musical theater—I call it Hammerstein’s Law, and Oscar Hammerstein II made splendid use of it—that if you want people to take your musical seriously, however silly the story, you need merely kill off one of the characters. Heartstrings will tug. Folks will think back on the songs with more sympathy than they did when they were first truffled out.

Hammerstein did it in Show Boat and Oklahoma! and Carousel and The King and I. In Yeomen of the Guard, Fairfax, sentenced to death, lives and weds; comical, cynical Jack Point, betrothed to Elsie, loses her and falls “senseless” while the merry wedding dancers skip around him. First Place to our Sir William, my friends.

To this score, Sullivan brought his grandest, most melodramatic manner, lovely mock-Tudor melodies when that folksy Ren Faire style barely existed, full of gentle counterpoint and harmonic tweaking to increase the melancholy poignance of a bygone era. It was good to have it back, to have it ably performed, to hear singers who could act their roles and sing them in tune.

I very much liked the flirty Phoebe of Abigail Benke, a strong, well-schooled mezzo with fine comic timing—challenged, however, by her suitor, Matthew Wages’s far too likeable Wilfrid Shadbolt. He’s supposed to make you dislike him for his job as a jailor and assistant tormentor! Mr. Wages would make it fun. Ms. Benke’s sighs in her spinning song were quite as loud as anything she sang in ecstasy.

Angela Christine Smith possesses the full figure and resounding contralto for Dame Carruthers’ “When Our Gallant Norman Foes,” and every word was clear, but I could not understand a syllable of the oft-cut patter duet, “Rapture! Rapture!” that mated her with Kyle Yampire’s sturdily sung Sergeant Meryll. Sarah Hutchison, like so many sopranos assigned the five-minute role of Kate Carruthers, had the prettiest soprano in the room, and of course the madrigal “Strange Adventure” rewards this.

The three leads were somewhat less satisfactory, and Savoyards know why: Elsie is written for a Donizetti prima donna, Fairfax for a Mozart tenor, and Jack Point for a constant-motion stage cut-up, and the budgets of revival companies cannot hire Nadine Sierra, Javier Camarena and Nathan Lane.

Elsie Maynard, the strolling singer, has a several moments of wild coloratura that is no longer at every light opera soprano’s fingertips. Laurelyn Watson Chase got most of the notes (she was especially lovely in “I Have A Song to Sing-O”) and was in tune throughout, but she did not ideally capture Gilbert’s artlessly absent-minded heroine. Victorian naiveté is no longer much-admired or taught to young actresses.

Daniel Greenwood phrased his two airs forthrightly and did not orate them through his nose, as so many tenors on G&S recordings do. He got the humor in his pre-execution song and the pathos in his reflections on anonymous marriage. Gilbert ties himself in knots over what this character knows and when (in the script) he knows it, so we accept the touches of confusion. Besides, Greenwood is tall. All is forgiven.

Jack Point’s jokes just aren’t very funny anymore. James Mills made grim work of trying to seem grimly amused, and his patters, sung in a reedy light baritone, were rains of vague syllable. (They are, to be fair, not among Gilbert’s best.) His two duets with Matthew Wages’s Wilfrid, however, were the comic high points of the evening: both guys totally onbursting with energy, cutting up, swapping quips, slapping shticks, and they tidily perked the plot-counterplot.

Mills was utterly shameless at the tragic finale and, well, that’s how Victorian melodrama ought to be. The homogenous [sic] chorus hurled itself mellifluously into Sullivan’s exquisite harmonic effects, and the principal confusion at the end of the evening was which of twenty glorious tunes one would go out humming. NYGASP preserves an irreplaceable treasure in performing these scores so well.

An earlier version of this review mistakenly stated that that the performance used amplification.