This new production of the 1847 original version of Verdi’s first stab at Shakespeare features the extraordinary performances of Luca Salsi and Anna Pirozzi as the Thane of Cawdor and his merry wife. 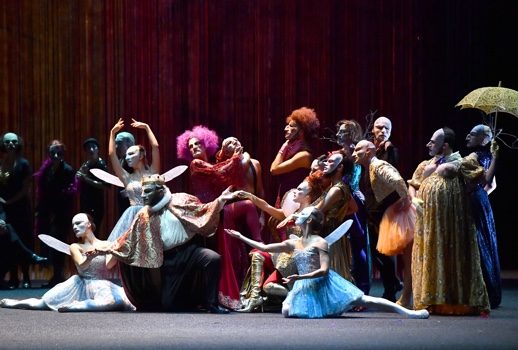 My 11-year old sister is coming to visit me at the end of the month and is devastated to miss Halloween at school with her friends. “Do they even have Halloween in Italy?” she asks. Well, if Halloween here is anywhere near as both hell- and hair-raising as the performances in Teatro Regio di Parma’s scorched-earth production of Macbeth, the Festival Verdi season opener, she has nothing to worry about.

At its center, this new production of the 1847 original version of Verdi’s first stab at Shakespeare features the extraordinary performances of Luca Salsi and Anna Pirozzi as the Thane of Cawdor and his merry wife.

Salsi, energetically bursting onstage in his first scene dressed not unlike Mussolini (not an outrageous comparison, come to think of it), is, refreshingly, a Macbeth actual personality: energetic, bullish, affable, even! But propelled by destiny and the light touch of his consort, a manic anxiety sets in, reaching its frantic head in the recit preceding “Pietà, rispetto, amore” and the subsequent aria sung with such a firm tone, cavernous but contoured like polished mahogany, that you’d never have known he had just carried the previous three hours.

It’s a portrayal etched in sensitive, naturalistic vocal acting and the visceral thrill of hearing the seamless transition from manipulator to manipulated via tremulous pianissimi and noble roars. The Dagger aria’s slow crescendo overwhelmed in both voice and presence and “Mal per me che affidai,” Macbeth’s final aria in this version, makes a similarly furious impact.

Moving in lockstep with him was Pirozzi in one of her calling-card roles. She goads her husband to murder King Duncan with an expansive, quicksilver soprano and conquests the voice-wrecker of a role with a steely edge, pinpoint accuracy, and a glorious and simplistic arrogance that makes the whole thing just so of-the-moment and exciting.

Hurling high note after high note, her “Vieni t’affretta” was a seat-of-the-pants thrill ride and “Trionfai! sicuri alfine,” a savage (if not very tasteful), octave-leaping aria that was replaced by “La luce langue” in 1865 received a similarly wieldy yet attentive execution. But after all this, her Lady Macbeth is no dominating monster.

Her touch is as light as her feathery pianissimi and her gaze as translucent as the vibrato-less and hauntingly glassy tone she adopted for the sleepwalking scene. In fact, the two had the familiar chemistry of any well-matched, normal couple. But with regicide instead of, like, hiking or a Labrador to keep them busy.

The hiking through Birnam Wood is better left to the opposition-leading Macduff, anyways. Antonio Poli made an impact as the Thane of Fife, shaping a muscular tenor voice into the arched phrases of his ‘Ah, la paterna mano.’ Only the very competent Banquo of Michele Pertusi, sounding somewhat covered and restricted, lacked the spontaneity of his costars. Alexandra Zabala and Gabriele Dibis were notable complements as Lady Macbeth’s maid and the doctor.

Daniele Abbado’s moist, atmospheric production unfolds largely within towering walls of vividly lit plastic sheeting (vivid lights by Angelo Linzalata) and amidst a persistent, misty rain that both drives home that Highland weather situation and reminds us that not even a little water clears us of every deed.

The Teatro Regio di Parma’s versatile chorus lends itself as much to the up-tempo witches as it does to the oppressed Scots, unfolding Verdi’s most ill-integrated nationalistic chorus, with sensitivity and largesse. Such largesse was echoed by the Regio’s orchestra, lead by DC-exile Philippe Augin who read Verdi’s score with a consistently Romantic churn, though my personal taste would have favored a lighter, more agile touch in Verdi’s moody, suggestive score.

Festival Verdi unfurls across Emilia Romagna for just one more week with its four very varied offerings. Each one promises, in its own way, a dì della vittoria for the listener!