Even for a medium that often trades in high-impact visuals, The Mile-Long Opera is dazzling to look at. 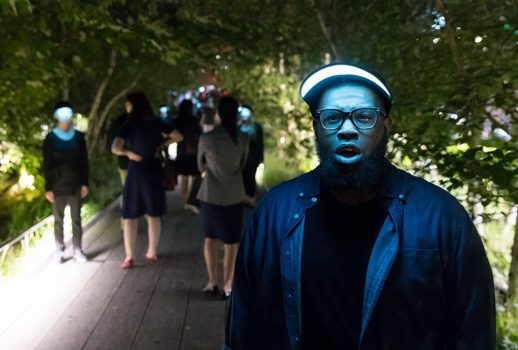 Even for a medium that often trades in high-impact visuals, The Mile-Long Opera is dazzling to look at.

Staged by architect Liz Diller and composer David Lang to run the length of the Manhattan High Line for six consecutive nights, the hour-long immersive work escorts visitors past a stationary army of 1,000 singers and actors, all of them narrating stories about life in the big city at 7:00 pm.

“People get to know each other, just by walking past each other,” chirp several of them at one point, an arresting instance of art mirroring the spectator’s experience in real time.

Clad mostly in black but with faces illuminated by LEDs under their visors, the diverse performers hail from over two dozen ensembles too numerous to name here—e.g. the Jackson Heights Community Choir, MLO Company Singers, Ukrainian Village Voices, Harlem Japanese Gospel Choir—and the overall effect, hundreds of denizens planted against the Hudson and city horizon, is so gorgeous, it’s hard not to whip out your camera.

Yet the spectacle’s deeper meaning concerns the state of the city itself. Here, the High Line, a public art-space that for nearly a decade has helped tourists view Gansevoort to 34th Street from above, plays host to a series of tales evoking the shifting meaning of urban stability, renewal, and development.

The opera unfolds in tandem with the twinkling skyline. It culminates in a poignant representation of what it means to be part of one of the world’s capitals. At one point I found myself moved to tears.

Bringing texts by Anne Carson and Claudia Rankine colorfully to life with stories culled from interviews with local urbanites, the opera plays frankly and ironically with the adjacent scenery, as well as with the current political climate.

Perhaps it’s no coincidence that this footpath featured a generous helping of lamentation, with performers bemoaning the state of next-door construction, a failing L-train, diabolical expenses (“Rent’s gone crazy!” cries one huddled mass), and civil tensions, while setting their grievances against some of Manhattan’s most expensive and luxurious condos.

On the other hand, the work manages to stir up a variety of tender feelings for the city, lending a graceful soundtrack to the architecture—I’ve never seen The Standard, The Shed, or the IAC building look so glamorous—and amassing an extremely populous and culturally mixed tide of faces.

Is this what 1,000 people looks like? I found myself wondering at one point, agog, as I walked the length of the line. This was before I realized that some 5.6 million people ride the New York subway each day.

In such a political present, it may not always be clear what we’re marching toward or what kind of march is best for our purposes; certainly, this opera’s procession didn’t always feel joyful. (Stepping off the High Line near the Javits Convention Center, ceiling intact, felt especially painful this weekend.) But the mile-long work presents a vast, monumental view of time as well, one I found comforting in spite of everything.

Pity the show’s sold out for the rest of the run—I’d say it’s worth seeing in person. But for those interested in a virtual tour, Target has created a 360-degree video version.