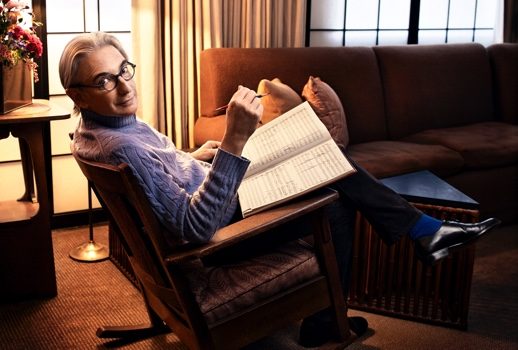 Carnegie Hall’s season opener last night fetched the usual glitterati, plying New York’s gala elite with champagne flutes and plenteously catered tenderloin and sushi carts in the antechamber to the Perelman Stage. Avez-vous encore faim, madame? For your delectation, might I propose a small wafer of mushroom strudel, some pig in blanket, a dainty amuse-gueule of glazed carrots to tickle the palate? Cheese pinwheel for the monsieur?

Unfurled before the Hall’s mellow ochre entrance, a red carpet gave impoverished onlookers the chance to gaze upon the high heels and penguin suits of many a VIP. There’s Christine Baranski, star of Cybill and Big Bang Theory, sporting a figure-hugging dress composed of sparkly paillettes. Over there, Leonidas Kavakos. Occupying a spot near the beef cart with her entourage, the unmistakable presence of sulfur-inducing deity Anna Netrebko herself in a luxe sundress.

Tonys laureate McDonald kicked off the singing portion in a diaphanous eggplant gown and matching cape with a hushed rendition of “Summertime” favoring blue notes while recalling her justly celebrated turn as Bess, which I was fortunate to catch in pre-previews in Cambridge but never on Broadway.

Alas, this was not McDonald’s night to attempt Gershwin. The lullaby was narrow in her voice and lacked operatic punch, the orchestrations were overly pop (remember the peach dress and snare-drum debacle with the BPO?

that), and she dropped the glissando at the end. I mean my gawd, how can you drop the “Summertime” downward glissando? That’s like attempting “You Made Me Love You” sans ?t=21″>downward swoop on “Myyyyyyy heart is like a hammer.” The song is no longer the song.

Speaking of swoops, La Fleming proved somewhat more adept in the classical rep, giving her take on the pizzicato vocalise from Villa-Lobos’ Bachianas. Dressed to resemble an oil slick, Fleming was a vision in metallic silver, with an asymmetric metallic silver sheath that somehow brought Beyoncé to mind.

Her voice was ethereal last night; beautiful tone really is her wheelhouse; and since the aria is essentially wordless and thus lacking opportunity to make sound-salad of a lyric, she wasn’t a hazard to her listeners. (Though it seemed she might still have gone up on a few phrases near the end!)

McDonald redeemed herself in obvious ways during the second portion of the concert, which focused on Broadway. Both divas have released musical theater albums in the past year, though to varying degrees of success. Both offered excerpts. The “Vanilla Ice Cream” monologue from Jerry Bock’s She Loves Me offered McDonald a solid occasion to flaunt her gifts as a supreme interpreter of emotion, and she layered the piece with an appealing sarcasm I’d never quite heard before, not even in the (equally dextrous)

Fleming broke the applause with a satisfyingly mush-mouthed approach to the dramatic “Fable” soliloquy from Adam Guettel’s Light in the Piazza, which gave my plus-one such insuperable church giggles I was worried we might be asked by the ushers to exeunt.

How Indiana (PA)-born Renée Fleming, so capable an interpreter of Russian, Czech, German, and Italian, is also so able to warp the vowels of American English with the droopy slopes of a stroke survivor, remains for me one of opera’s great mysteries. By the time she got to the song’s climax—“Luff eef you ken, oh mai Klahrah!”—I’d had quite about enough.

Capping their performances, a medley of Sondheim’s “Children Will Listen” and Rodger’s “You’ve Got to Be Carefully Taught” brought the two sopranos together onstage, their voices blending imperfectly on songs that, as McDonald noted, “seemed right for these times.” But the true magic came at the encore, when Tilson Thomas introduced a Bruce Coughlin arrangement of the Laura Nyro

variety show number, “Save the Country.”

The politics of the piece certainly felt right, as did their scoop-tastic performance of Nyro’s manic-depressive anthem. What felt righter was the standing ovation that came at the end of the night, as well as the sight of Netrebko’s friends all up on their feet, as the Met’s reigning Aida remained seated, lost in her Instagram.