Go away from my window

Hunger was the note of the night, a sentiment shared between the audience and Proving Up, a lean and hungry one-act telling a story of drought and desperation on the post-Civil War Western frontier. 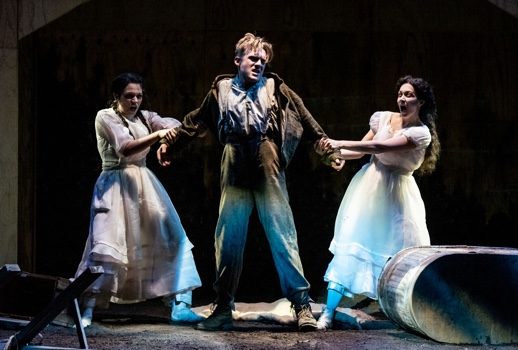 Columbia University’s Miller Theater is a small space, intimate, and wider than it is deep, but last night, waiting for the New York City premiere of Missy Mazzoli’s Proving Up, the eager and expectant energy of the audience could have filled a much larger house.

No doubt the recent announcement that Mazzoli will be one of two first ever female composers to be commissioned by the Met Opera contributed to the hungry atmosphere, as did the sold-out house.

But whatever the reason, hunger was the note of the night, a sentiment shared between the audience and Proving Up itself, a lean and hungry one-act telling a story of drought and desperation on the post-Civil War Western frontier, a story whose unrelenting bleakness is almost unworthy of Mazzoli’s nuanced, inventive score.

Proving Up is centered on the Zegners, a family in Nebraska hoping to take advantage of the Homestead Act as a ticket to land-ownership and prosperity in the newly open West. In order for homesteaders like the Zegners to claim their bits of earth — to eponymously “prove up” — they must present for inspection a home that meets a certain number of requirements.

The oddest of these (so odd, in fact, that it is ahistorical, the clever, almost farcical addition of Karen Russell, who wrote the short story on which Proving Up is based) is that the house must have a glass window. The Zegners have met this last requirement, and because, as Pa Zegner (John Moore) insists, “farmers must look after farmers,” they’re willing to share the wealth, sending their youngest son, the eager and innocent dreamer Miles (Michael Slattery), out on a journey to bring the window to a neighbor before the inspector arrives.

The window is, as one might imagine, an important symbolic object for the opera. Miles marvels at the memory of a window, seen in the house of successfully proved up neighbor homesteaders, recalling the way it “fuse[d] their inner room with the outside.” The Zegners are obsessed with their piece of glass because, yes, it’s the ticket to owning the land they have brutally toiled for five years, but also because the deeds to their land, like the window, like the semi-mythical inspector himself, represent the potential to fit their lives and their land into a larger framework of American legitimacy, to fuse their inner Nebraska with the outside.

After all, as Ma Zegner (Talise Travigne) repeatedly insists, to prove up is to show everyone “back East” that you’ve made it, that you had the grit and the Protestant work ethic to not only survive on the frontier but thrive.

This frontier harshness and isolation suffuses Proving Up, from the set (by Adam Rigg), comprising a bare plywood backdrop that is equally redolent of construction and coffins and a box of dark, barren soil that fills the stage, to the stark white and dim purple palette of the lights (by Pablo Santiago), to, of course, Mazzoli’s score, which beats to the eager, confrontational pulse of the homesteaders’ lives, seething and churning with the Zegners’ desperation. 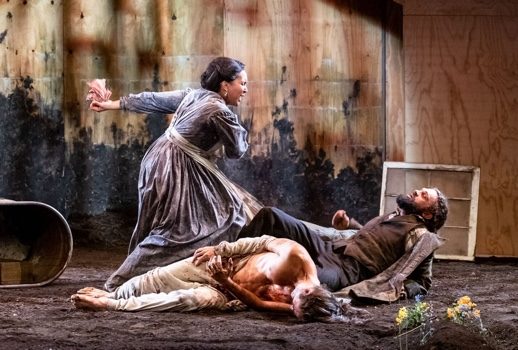 The music of Proving Up, strikingly rendered by the International Contemporary Ensemble, is frequently ugly — open-tuned guitar strings are hammered on with mallets, pianos and harpsichords clatter, singers sneer and stutter, violins and harmonicas and human voices swoop from high to low like police sirens screaming by in the night — but it is ugly to tremendous, hair-raising effect, building the razor-sharp tension that I imagine has led some to describe Proving Up as a “horror opera.”

There are, however, moments of musicality that emerge from this field of chilly, harsh sound. Miles, riding out to make his window delivery, has a lengthy monologue delivered by Michael Slattery with a fully committed exuberance and a strong clear tenor that combine to form an entirely believable and deeply likeable performance of boyhood.

Even the Zegners’ two dead daughters, played as a childish sort of Greek chorus by soprano-mezzo duo of Cree Carrico and Abigail Nims, when they do not sound ghostly and unpleasant, sing bewitchingly intertwined musical lines. In the score of Proving Up, moments of fear always seem to have a little beauty in them, and moments of beauty are never without a healthy dollop of fear.

Of course — spoiler warning! — it is the fear that wins out in the end. Miles’ delivery is endangered first by a blizzard, then by an encounter with a mysterious, dangerous figure, played by Andrew Harris, who dominates the last quarter of the opera with his menacing stage presence and a simply enormous bass voice.

It is in, however, these last twenty or so minutes that Proving Up doesn’t quite live up to its potential. The end of Proving Up is, like its design, its music, and the period of American history it depicts, harsh, and ugly, and sad, but unlike the design or the music, which harness ugliness to great emotional effect, the story’s ending is simply ugly and sad.

As Mazzoli and librettist Royce Vavrek took the stage to an enthusiastic standing ovation, I found myself untangling an emotional reaction to the opera as densely layered as its orchestration. Was I moved? Yes. Impressed? Undeniably. Shaken, too. But beneath it all, I felt drained, like the 85 or so minutes of challenging, unsettling music I’d just experienced had somehow been leaking meaning steadily throughout the opera’s denouement.

At the end of Proving Up I felt that the dark Nebraska soil covering the stage had soaked up not only the blood, sweat, and tears of whole families of striving homesteaders but that of the opera as well, leaving behind very little that could prove vital or fertile.