Must the winter come so soon?

On Tuesday we got one of the Met’s inveterate classics, which meant yet another opportunity to gaze upon the old accessories: Donkey cart! Teal shawl! Fugly plaid slacks! 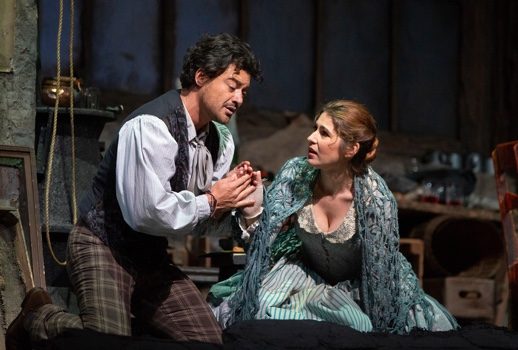 Night two of the Metropolitan Opera’s new season took us from the go-go Bacchanales of Gaza to the wintry streets of 19th century Paris, raising the curtain on a brand-new production of Puccini’s La bohème.

J/K! Actually, on Tuesday we got one of the Met’s inveterate classics, the plush and populous Zeffirelli production, which meant yet another opportunity to gaze upon the old accessories: Donkey cart! Teal shawl! Cut-out garret interior with tacked-on random balcony! Fugly plaid slacks!

The Florentine director’s show has its haters, but I happen to adore this museum staging, in part because the sets are so gorgeous and charming (the audience continues to swoon at first sight of Momus), in part because ritual can be comforting—but also because, well, let’s be real: the production and I are roughly the same age. I feel like we’re growing together.

In its mid-thirties, this Bohème feels slightly tuckered and a little mushy and occasionally in need of a good Riesling-and-Tinder night to take the edge off. But the show’s also grown into itself, guys. It has new priorities.

Nowadays the Met Bohème serves mainly as a vehicle for company debutants. It’s a relatively easy sing; the spectacle’s low stakes because Bohème audiences tend on the whole to be greener and less discriminating than those who suit up for gala night. Plus, everything’s so finely etched and verismo that if Mimi bombs or goes off the rails, she’s not necessarily a bad singer; she’s just really good at tuberculosis.

This season was far from off the rails, however, and featured the debuts of three stars on the make—conductor James Gaffigan, baritone Etienne Dupuis as Marcello, the Mimi of acclaimed Australian soprano Nicole Car—all of whom looked great in their siècle gear and proceeded to knock four short acts out of the park.

We also got the return of extraordinary soprano Angel Blue, the Rodolfo of stirring but overused tenor Vittorio Grigolo, and the funny and well-cast Donald Maxwell’s Benoit/Alcindoro, as well as the chance to watch walking daguerrotypes Davide Luciano and Matthew Rose chomp down on baguette as Schaunard and Colline, respectively.

Tall, raven-haired, and a ringer for Stephanie J. Block,

may be a Met newbie, but she’s hardly a newcomer to Mimi: the soprano’s already inhabited the role in Paris, and Dresden. Hers is a voice of considerable lyricism and beauty, even if the sound—on the shadier side of the soprano spectrum, at times covered like a mezzo—is a touch unusual for a callow ingenue.

The darkness worked in this case: her “Sono andati” was mesmerizing, a touching elegy of the self, and ranked among the most moving renditions I’ve heard live.

Because she and Dupuis are real-life partners (they met during a 2015 Berlin production of Onegin), exchanges between Mimi and Marcello in this incarnation were doubly affecting. These moments also betrayed certain disparities in aptitude, though, as Dupuis, perhaps due to nerves, was an uncharacteristically wooden boho painter.

Such stiffness aside, onstage characterizations were generally full-bodied and fresh. A number of lovely moments between Mimi and Musetta in the second act, for instance. It turns out Blue, who delivered

incandescent Mimi in last year’s Met production, is just as smashing a Musetta, obliterating the sets with her entrances.

I hear she’ll be playing Violetta in January for Covent Garden; best believe I logged into Expedia as soon as I got home.

LaGuardia High grad Gaffigan (who also directs the Lucerne Symphony Orchestra) more than proved himself as a first-rate conductor of opera, pulling vivid, cinematic sounds from the depths of the Met orchestra. With his backing, the Met chorus sounded somehow even fuller than usual as well—as did Luciano and Rose, two fine singing actors who delivered the goods as Rodolfo’s rent-evading wingmen.

Yet more impressive in my view, Gaffigan made it through a night of having to follow the torturous whims and caprices of his star tenor from the podium. Honestly, I don’t know why more conductors don’t just throw their batons at Grigolo: his portrayal was a mess of uneven dynamics (seems the dude’s been experimenting with pianississimo lately, oh but don’t worry, he still likes to let it howl when singing à deux) and fast-slow-fast-slow phrasing, as though “Che gelida manina” were a game of demented musical chairs.

But like the rest of the cast, the diva tenor showed a solid knack for inhabiting character, and when he was on, the scene was rarely unexciting.

At some point Peter Gelb will surely cave and the Met will bow to critics’ demand for a new take. But as the rapturous applause on opening night made clear, sometimes a production, like many an old overcoat, take it from me, is hard to give up.