Odyssey Opera in Boston, which loves to open its season with a concert performance of some forgotten work, gave La Reine de Saba in Jordan Hall Saturday night. 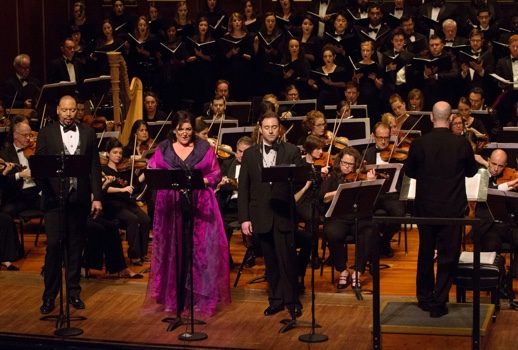 A quarter of an hour till the Chinatown bus left Boston, so I plugged my phone into a socket. The other socket was taken by the phone of a young guy in a hoodie.

“You know about Annabelle?” he said. “Annabelle the doll?”

“This guy made this doll for his little girl and it looked just like her. But she died. And her soul entered the doll. You really never heard about her? If you believe in the paranormal – I’m very big on the paranormal. Like—you know the Winchester mansion?”

“No! This is real! A woman, her husband invented the Winchester rifle, and she built this huge house. They say it’s haunted by everyone who was ever killed by a Winchester rifle. And if you believe … in the Big Boy up there … and Lucifer downstairs … ”

I had a vision of Lucifer banging on the pipes so we would turn the music down. And, tit for tat, I had a paranormal story for him.

“You should have seen the show I saw last night.”

I said “show” because “opera,” like “paranormal,” is a word with associations … well, you know. Turns some people off.

“It was about the Temple of Solomon,” I told him. “Built by an architect from Tyre who had magical powers. He said that was because he was actually a djinn—do you know about djinni?”

He knew all about them.

“So this dude was made of fire and air and had magical powers—whereas Solomon—and the Jews—and all the humans, I guess—were made of earth and water, and couldn’t summon demons to help them do stuff. And he summoned the djinni to build the Temple.

And the Queen of Sheba came to marry Solomon, but the architect pointed out to her that she was descended from the djinni as well. So she gave King Solomon a roofie and ran off with the architect.”

“This must have been back when they built the pyramids,” said the boy in the hoodie.

A good idea, because my bus was about to leave for New York and it was time I got on it.

The opera, La Reine de Saba, in fact, only dates back to 1862. It was composed by Charles Gounod, based on a play by Gerard de Nerval, the French symbolist poet who had recently hanged himself. But don’t be put off by that—French poets commit suicide for perfectly rational, even Cartesian, reasons. It may have nothing to do with invoking the supernatural. Anyway, the opera flopped. Napoleon III hated it.

But Odyssey Opera in Boston, which loves to open its season with a concert performance of some forgotten work, gave it in Jordan Hall Saturday night. They billed it as the American premiere, which it wasn’t—La Reine de Saba was given in New Orleans in 1899. I saw it in New York about thirty-five years ago, starring the glamorous Calliope Cafeggi. Whatever became of her? (I’m afraid I missed it in New Orleans.)

The first two acts of the opera—there were five acts in all, as was usual for the Académie Nationale de la Musique—were rather rumbustious second-rate imitations of Meyerbeer, burly fanfares and astonished crowds to accompany special preposterous magical stage effects, omitted of course in the concert performance in Boston.

The Queen of Sheba arrives in Jerusalem for her betrothal to Solomon in time for the consecration of the Temple—only to realize that she and Adoniram, the architect, have history. Or should I say time-line?

There was a great deal of orchestral schmoozing, and Gil Rose, Odyssey Opera’s adventurous director, was tickled to show off how well they perform this virtuoso material, how well William Cutter’s chorus express astonishment, bewilderment, triumph, vendetta and, well, astonishment. In some scenes, they even got to play djinni.

But of musical substance, there wasn’t a great deal until Act III, when we had a pretty decent duet for the illicit lovers plus the usual mid-opera concertato for everybody at once.

Act IV began with a lengthy ballet to show off the skill of the instrumentalists—especially the triangle player. Gounod did not write interesting ballet music; to be fair, neither did any of his contemporaries before Tchaikovsky. Then a spy revealed to King Solomon that the Queen and Adoniram have been detected exchanging fevered words all night long in her tent in the Vale of Kedron.

Solomon is, naturally, furious. Kevin Thompson managed this quite well. The part is on grand opera scale, full-throated soaring lines at the top of the bass range, formal or passionate by turns with elegant grace notes, plus the occasional virtuoso deep, dark low one. Mr. Thompson hung on for dear life, and his French diction was choice.

There is the faint beginning of a wobble, which I hope has not gone too far to be corrected. No doubt he was grateful when, about to ravish the Queen, her sleeping draught took effect on him with another act still to go.

Adoniram’s music is also grand opera standard: the unsingably strong, high and endless tenor antihero. Whoever originated the role had clearly cut his teeth on Le Prophète if not Tannhäuser. When not performing conjuring tricks, squabbling with three mutinous apprentices, seducing the Queen (or vice-versa), or playing mind-games with Solomon, most of the part was spent in hectoring, blistering declamation.

It fell to Adoniram to explain the opera’s crazy theology, the pre-Adamite demonic creation of which only the djinni(descended from Tubal-Kain) survive, and why he and Balkis (the Queen) are meant for each other.

It’s a very heroic sing, and Dominick Chenes was a bold fellow to take it on. He began strongly, modified gear for the long duet of many moods with Balkis, had to produce fireworks for Act III and fell apart, vocally, in Act V. Gounod asked for much too much; suddenly Chenes’ pitch was all over the place and power evaporated.

The fact that he has also been fatally wounded by those three rebels did not help him respond to the Queen’s insistence that he live and elope. He has a clear, forceful sound, with what they used to call “ping,” and I’d like to hear him in a normal role sometime. Less fire, more air.

Balkis, the Queen of Sheba, was sung with regal dignity, dramatic commitment and a lovely, soothing line by Kara Shea Thomson. She sang ornaments delicately and expressively, and her amorous music was highly attractive. When, at the conclusion of the night, Adoniram has died in her arms to be ecstatically lifted to the heavens by his djinn brethren, she tossed caution to the winds and, vocally, soared to the heights with him.

If anyone made a case for the opera it was she, but I think we’d all be happier with excerpts than the whole thing. Balkis is saluted as the “Queen of the Morning,” and some commentators believe Gounod had it in mind to set her up in opposition to Mozart’s “Queen of the Night,” but Gounod’s role has considerably more meat and passion to it but lacks the great tunes and the maternal double-tongue.

Michelle Trainor sang the all-but-obligatory trouser role with a serviceable light soprano. Matthew DiBattista, David Kravitz and David Salsberry-Fry sang the three insubordinate engineers with the proper arrogance. It was not clear to me if they were meant to be human or demon, union organizers or subversives, or the forerunners of the Freemasons.

La Reine de Saba thus possesses all the elements of the spectacular contraption that was Parisian grand opera in its forty-year heyday, from Auber’s La Muette de Portici in 1828 to Thomas’ Hamlet in 1868—or one might say it ended with Verdi’s Aida, last and most triumphant of the lot. There are superhuman solo parts here, an exotic plot, special effects, chorus and orchestra showing off the extent of their abilities.

What it hasn’t got is much in the way of substance and, in 1862, much in the way of novelty: Everything Gounod offers had been offered many times before. The melodies are simply not very interesting; the love music has no passion, the conflict no bite. Given the subject one might have hoped for chic Orientalism (so often gaily deplored nowadays) or even some appropriation of Hebrew themes, but Gounod will not risk it.

The score compares unfavorably with Meyerbeer’s L’Africaine, on which the dying master was at work at this very time. Gounod writes as if the salon was his only habitat. For grandeur, he gives us salon fortissimo.

From the composer who had produced Faust and was to create Roméo et Juliette, this is disappointing, all the more so when Odyssey has given it such a luxurious reading. What went wrong?

Perhaps Gounod’s abilities matched Faust and Roméo so well because he composed them for the Théâtre Lyrique and not the far grander Opéra. He wrote them as number operas with dialogue to join them into continuous pictures; they required revision to become “grand.”

For La Reine de Saba (and Cinq-Mars and La Nonne Sanglante, also failures), he was expected to devise full-act musical structures, with evolving musical matter to hold them together. He failed, in this event, even to produce catchy tunes. Good tunes might have saved the opera even from weird tales and mad demonology—good tunes have saved worse libretti than this one.