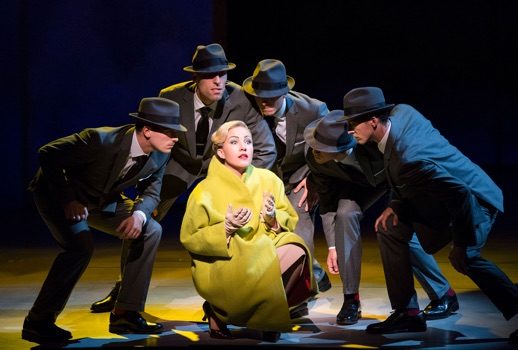 The travails of a frigid kleptomaniac might not seem the stuff of opera but Nico Muhly absolutely believes it is. Marnie, his second work for the Met, is this fall’s big premiere so “Trove Thursday” offers a preview broadcast from last year’s London world premiere run with Sasha Cooke as the troubled heroine and Daniel Okulitch as her enamored if creepily manipulative boss-then-husband heading an entirely different cast from the Met’s.

Set to a libretto by Nicholas Wright, Marnie is based on a 1961 novel by Winston Graham which I haven’t read it but remains in print.

But if anyone is familiar at all with the opera’s plot it’s via Alfred Hitchcock’s 1964 film adaptation with Tippi Hedren and Sean Connery as Marnie and Mark Rutland. The Met and the opera’s creators seem to be banking on the Hitchcock connection but the two works have nearly as many differences as similarities.

My parents apparently thought it was a good idea to take a precocious kid and his younger sister to see Marnie at the drive-in as the second-half of a double-bill with Hitchcock’s following film Torn Curtain perhaps because the latter starred “Mary Poppins!”  What I remember even more than the excruciating murder by oven asphyxiation committed by Paul Newman and a female accomplice in Torn Curtain were the vivid flashes of red that flooded the screen whenever Marnie recalled a horrifying trauma from her childhood.

I also revere such suspense classics as The Lady Vanishes, Notorious, Strangers on a Train, Rear Window, Psycho and especially the often-ignored Shadow of a Doubt, but Marnie I don’t care for at all. I re-watched it a few years ago and found the clumsy rear-projections and tacky painted sets risible and Hedren’s bland-blonde performance unmoving.

Connery’s Rutland (ouch, that name!) raping his frightened new wife also dissipated any empathy I might have had for his quest to root out the cause of her crippling, crime-inducing neuroses.

But the film has its staunch proponents. Robin Wood, a writer I otherwise admire greatly, famously made one of the most outrageous statements in the history of film criticism in its defense: “If you don’t like Marnie, you don’t like the movies of Alfred Hitchcock and if you don’t love Marnie you don’t love cinema.” These sentiments are of course patently ridiculous but such devotion might explain why Muhly was drawn to its enigmatic heroine.

If one peruses the synopsis of the Wright adaptation, one can immediately see how it differs from the film. For one thing the love triangle doesn’t involve a female (played by Diane Baker) but Mark’s brother Terry, a countertenor role for Muhly.

Marnie’s mother dies in the opera whereas a melodramatic confrontation with her provides the film’s climax triggering Marnie’s psychological breakthrough. The opera eschews the film’s sort-of happy ending in favor of highlighting Marnie’s acceptance of her crimes and punishment.

For those who’d like to experience Hitchcock’s work in an optimal situation, the Film Society of Lincoln Center presents a 35mm print of Marnie a week from tonight preceded by a panel moderated by Paul Cremo with Michael Mayer, director of the Met’s production, and Wright, the librettist.

Isabel Leonard and Christopher Maltman take over the roles of the unhappy couple at the Met with Iestyn Davies as Terry and Denyce Graves returning to the house for the first time in over 12 years as Marnie’s mother. Robert Spano conducts Marnie in his Met debut on October 18.

Marnie can be downloaded by clicking on the icon of a square with an arrow pointing downward on the audio player and the resulting mp3 files will appear in your download directory.