San Francisco Opera opened their 2018-19 Season Friday with a double bill of Italian verismo operas, Cavalleria rusticana and Pagliacci, which made a welcome return to War Memorial Opera House after 15 years. 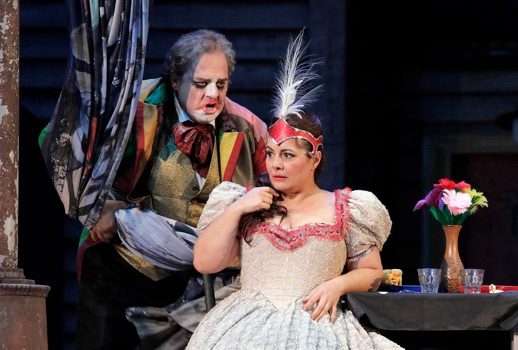 Talk of the town: Lianna Haroutounian as Nedda (with Marco Berti)

San Francisco Opera opened their 2018-19 Season Friday with a double bill of Italian verismo operas, Cavalleria rusticana and Pagliacci, which made a welcome return to War Memorial Opera House after 15 years.

As always, the opening night attendees represented the crème de la crème of San Francisco, and this time, the excitement was palpable around political figures, particularly Congresswoman Nancy Pelosi (who received a big ovation during the opening speech) and Mayor London Breed.

I spotted Michael Tilson-Thomas, who just opened SF Symphony 2018-19 Season two days earlier, among the well-dressed attendees. General Director Matthew Shilvock, President Keith B. Geeslin and Chairman of the Board John A. Gunn gave little speeches before conductor Daniele Callegari led the SFO Orchestra in the national anthem. To this reviewer on his first opening night, all that glitter was eye-popping and overwhelming as well!

To replace Jean-Pierre Ponnelle’s staging, SF Opera brought in a new production (to SF) by superstar tenor turned director, José Cura. This presentation premiered in Opéra Royal de Wallonie (Liege) in 2012 (where Cura himself sang both Turiddu and Canio) and had traveled to Teatro Colón (Buenos Aires) in 2015. Cura also designed the set for this production. The direction for this revival, however, was done by his compatriot, Jose Maria Condemi.

Cura left a detailed Director’s Note on the program, and here I quoted two paragraphs that showcased his visions for the staging.

When I was first commissioned to direct and design Cavalleria Rusticanaand Pagliacci, the idea of molding the double bill into a tribute to the Italian immigration of early 1900s Argentina quickly prevailed. The spirit of these two emblematic works of the verismo movement—both excessive and timid, light and dark, affectionate and brutal—seemed very applicable to those uprooted Italian ancestors. Thus La Boca, the Italian quarter of Buenos Aires, for all its history and picture-perfect, multicolored beauty, was the ideal setting….

The Prologue remains one of the most touching moments of this production for me, its words heard and felt only by the beggar and the paperboy. The use of these characters to narrate a united story animates an essential part of the staging: the presence of the two casts during both operas. With the choice of both operas sharing the same set, the challenge was to establish a socially structured town with its priest, mayor, bartender, barber, grocer, children, etc. So, we see Nedda and the clowns posting the company poster at the beginning of Cavalleria, we see Santuzza sporting her seven-month belly in Pagliacci, as well as Mamma Lucia still managing her tavern, assisted by her waiter, Silvio. But my favorite moment remains the ending: hearing Lucia—almost an “oracle” in her own right—shouting “La commedia è finita.”

So, in essence, Cura merged the two operas into one long story that took place in the same neighborhood and included characters from both operas. One thing for sure, he stuck to his vision, and I gave him hats off for that. The Argentine flavor was all over the stage, even before the operas started, as he prefaced Cavalleria rusticana’s Preludio with snippet of Gardel’s “Caminito”.

To this reviewer, Cavalleria rusticana and Pagliacci work well because as a double-bill they represent opposite side of the spectrum, even if they are both tragedies. Cavalleria is the calmer, almost meditative heart-tugging tragedy, while Pagliacci is the bawdy, more explosive, in-your-face counterpart; it is like Cavalleria’s the yin for Pagliacci’s yang.

They have different color palettes as well. So for me, to mix those two stories together and to overpopulate them with the same set of people removed the contrast, resulting in a long, somewhat monotone, double tragedy.

In addition, the effect of combining the characters from the two operas tended to get lost for those new to the operas, and to frustrate old-timers like me. It made the stories unnecessarily overcomplicated, and it actually took focus away from the primary action happening at that time.

There were many instances where my brain went to overdrive trying to analyze these crossovers. Why was Mamma Lucia there during “Vesti la giubba?” Couldn’t she say something to Canio to prevent a repeat of the tragedy that happened to her son? Why, for that matter, was she given the final word? Because she mourned twice (her son and Silvio, her shop assistant)? 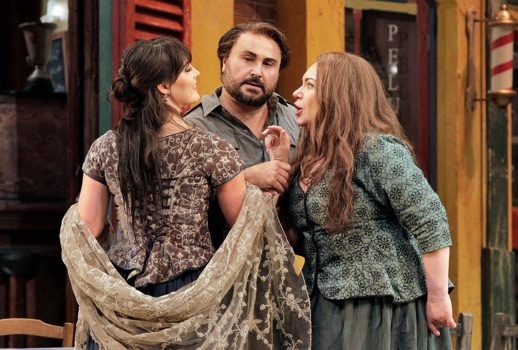 Interestingly, the cast list on the program included roles for both Mascagni and Leoncavallo, the composers of both operas, in what seemed to be trendy directional choices in recent years (for example, Wagner in Barrie Kosky’s Meistersingerand Tchaikovsky in Stefan Herheim’s Pique Dame).

The worst offender in the staging idiosyncrasies was, in my opinion, the decision to place a tango duet during the famous “Intermezzo sinfonico” from Cavalleria rusticana, with dancers that looked like Turiddu and Lola. The fabulous music, usually staged simply as empty stage in anticipation for the impending doom, now reduced into merely a soundtrack to this “foreplay ” dance (lovely as the dancers were), and it felt completely out of place.

Yet, if you took away all these elements, this production amounted to an essentially traditional staging that would work on its own. The set was handsome looking, if static. On the left, Mamma Lucia’s café located right behind “Caminito” sign, with Alfio and Lola’s house above it.

The church, crucial for Cavalleria, was placed in the background, and a wall of colorfully painted houses on the right. A small raised platform was placed in the center to represent a city square, where the commedia dell’arte in Pagliacci performed and the final tragedy took place. 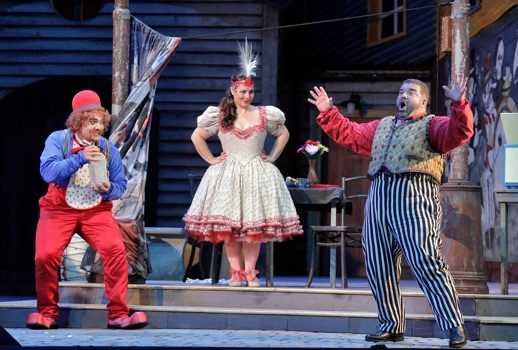 On the opening night, the ladies dazzled much more than the guys. I was most impressed with the Armenian soprano Lianna Haroutounian’s take on Nedda, the highlight of the night for me. After a career-defining Cio-Cio-San here two years ago, I wouldn’t be surprised if her Nedda would equally be the talk of the town. It was that grand!

Her characterization was spot on; joyous, perky, brave and rebellious all rolled into one; and her bright soprano voice was gleaming, nimble and strain-free. The duet with Silvio was particularly expressive, and she was sufficiently defiant for the final act.

Slightly less successful but still packing a punch was mezzo-soprano Ekaterina Semenchuk’s Santuzza. To me, Cavalleria is all about the plight of Santuzza; she has to be charismatic and make you fall for her to make the story work. Semenchuk’s Santuzza was lyrical albeit expressive, though there were times that her voice was drowned under the choir and orchestra.

Jill Grove made an impressive youthful-sounding Mamma Lucia. Because of the production, she was on pretty much the whole time, and she held the stage strongly. As Lola, Laura Krumm almost stole every scene in which she appeared; her Lola was sexy and flirtatious. Clearly she was the winner during the confrontation with Santuzza!

Marco Berti’s Canio was definitely loud, but I felt there wasn’t much expressiveness to his voice; in turn it rendered his portrayal of Canio as a cold, hard cynic without much redeeming value. It was hard for me to empathize with his “Vesti la giubba”.

Roberto Aronica didn’t leave much impression as Turiddu for me as well; his off-stage Siciliana “O Lola c’hai di latti la cammisa” was barely audible from where I sat. I chuckled a bit during his (supposedly) tearful goodbye with Mamma Lucia, since she didn’t show up on stage until after he called out her name twice. (Yes, my companion thought that was funny as well!) Ironically, he was most successful in the drinking song. 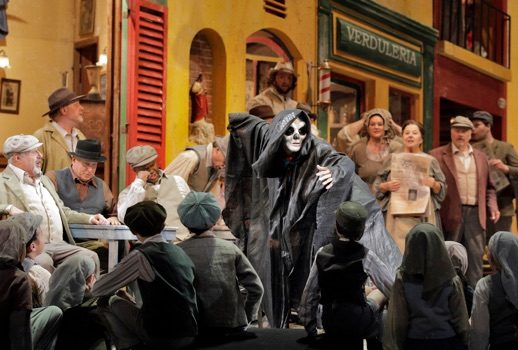 I was most disappointed with Greek baritone Dmitri Platanias in the dual role Alfio/Tonio (actually triplerole, playing Leoncavallo as well in this production), which made US and SF debut that night and which I was looking forward to hear. I felt that his voice lacked weight, and as the result, his portrayals missed gravitas, particularly as Alfio.

He was slightly better as Tonio, but still I didn’t get a sense of danger and menace that was usually associated with the character. David Pershall made an effective Silvio, but, unfortunately, Adler fellow Amitai Pati was barely audible as Beppe.

Between the two operas, I always feel that Cavalleria rusticana is harder to bring out well; it needs an able and delicate conductor’s hand to coax it into perfection; else it is easily turned into histrionics, or worse, a total snoozefest!

In that sense, I felt that conductor Callegari tried so hard not to exaggerate that his reading turned out on the bland side. This was particularly evident during the Easter Hymn, “Inneggiamo, il Signor non è morto”, the epicenter of the opera and my most favorite scene.

This scene really wants to be milked for what it worth, using constant change of dynamics and tempos and perfectly timed climaxes, to make the audience truly sympathize with Santuzza and her cries of help. I’m afraid Callegari just missed on opening night. He fared better with Pagliacci, but alas, the damage was done. I do want to point out, however, that the harp sounded clear and particularly lovely!

In summary, it was a frustrating night for this reviewer, elevated by the valiant performances of the leading ladies. It was a bit sad for me to see so many of the well-dressed audience left after the intermission (although I wasn’t surprised) and missed what truly was the highlight of the night. Haroutounian deservingly received the loudest cheer of the night, and that warmed my heart as I went out into the night and the esteemed guests went to the after party!