“For what, we ask, is life without a touch of Feminism in it?”

The Lamplighters Music Theatre opened their 66th season in SF last Saturday with triumphant performance of Gilbert and Sullivan’s The Pirates of Penzance. 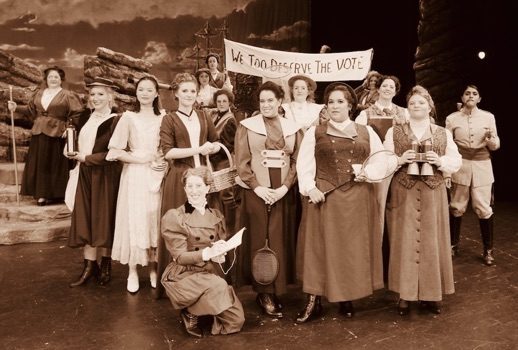 The Lamplighters Music Theatre, the San Francisco-based company dedicated to “produce the comic operas of Gilbert and Sullivan and other works of comparable wit, literacy and musical merit”, opened their 66th season in SF last Saturday with triumphant performance of Gilbert and Sullivan’s The Pirates of Penzance. As mentioned in their Mission statement on their website, “The hallmarks of a Lamplighters production are lavish costumes and sets, live orchestra, excellent comic acting, and gorgeous singing without microphones showcasing the beauty and purity of the human voice.” They truly delivered their promise in all aspects with this production.

Over the years, I had been attending their productions, and there was something familiar each time. It was like going to a big family reunion; you could be sure you would have a good time, and occasionally, even an amazing time. This feeling reflected well on the audience of the performance that I saw.

Everybody seemed to be familiar with everybody else; parents would bring their children, even grandchildren; and there were people who dressed up for the occasion. It was a very heartwarming atmosphere, and I believe that was why they were thriving for the last 66 years.

What was the reason for all that, you might say? It was because they stayed true to their mission statement above. In fact, this was what always astonished me every time. They seemed to always be able to be faithful to the score without being stuffy or old-fashioned; to be family-friendly even while handling adult topics; and to be inclusive and welcoming to all. That was definitely not an easy thing to do, and it was refreshing to see, particularly in the era of regietheater in opera world.

Even more telling was the custom designer Miriam Lewis’ explanation on the website, quoted here, “We’re setting this production in 1897, which is when you get the idea of the New Woman. What this means for us is that women were doing a lot of things that had previously been only done by men, both professionally and for personal pleasure. The women in our ensemble have to be active in order to pursue their interests. They can’t wear the beautiful, giant hoop skirts used in past productions. So they are wearing things like bicycle bloomers, split skirts, and knickers. They will really be able to climb over rocky mountains!”

“We want these modern daughters of the Modern Major General to be able to be very active in their costumes. They can be archeologists, or geologists, or naturalists. And the idea that women could be more active in their leisure pursuits went hand in hand with the idea that they could be more active in a social sense. The suffragette movement had been going on for some time, but was still very important in 1897. All of this is reflected in the change of costume for our women.”

“But it certainly isn’t dour or grim. These are girls that just want to have fun. But fun with a purpose!”??

This direction permeated every aspect of this production; so much so that Major-General’s daughters had a tendency to physically abuse the men/Pirates, one of the very few misguided directions in this production, in my opinion. (Being emancipated doesn’t give you a license to be a bully!) Nevertheless, I applauded the director for sticking through his vision throughout the production.

As usual in Lamplighters productions, the staging, costumes, props and lighting were amazing. The YBCA Theatre wasn’t a big hall, and the stage wasn’t deep either. In that sense, the static stage worked extremely well. I particularly loved the attention to details even for such a static stage.

The cardboards were “carved” into stones for the Act I stage, and later on, the high-ceiling Major-General’s chapel in Act II. As mentioned above, the Major-Generals’ daughters were in various work clothes; their entrance on “Climbing over rocky mountain” made a very striking presence; the audience even applauded when Mabel and Isabel brought a banner saying “We Too Deserve The VOTE”!

It was rather hard for me to review the principals separately, as they were performing this as a very tight ensemble. One thing to be sure of was that the Lamplighters always insisted on perfect dictions, and it was such a joy to be able to understand what was being sung and being spoken without continuously checking on the supertitles! (It was not always the case even with English operas.)

The clearest example for this was Ruth’s opening aria “When Fred’ric was a little lad”; here she enunciated the difference between “pi-lot” and “pirate” so well that it was actually very funny!

I also particularly love another one of Lamplighters’ tradition; they listed the singers and orchestra members on the program with the year when they debuted next to the name. That way, it was pretty easy to note who were the veterans and who were the newcomers. This, in my opinion, further established that they were like one giant happy family.

As Frederic in this production, Michael Desnoyers portrayed a very young and inexperienced pirate apprentice in his acting and singing. With his light tenor, he sounded almost like British descendant of Tamino! Surprisingly, during the famous Paradox trio, he was very closely treading past PG with his fixation on Ruth’s bosoms!

As Mabel, Erin O’Malley wasn’t merely a songbird, but a full-fleshed woman capable of choosing her own fate. This was particularly evident during the famous aria “Poor wand’ring one”, with her dark weightier coloratura voice. It was a joy to see her, and she did get a loud cheer after that aria! She seemed to be going place too, as she was scheduled on next year West Edge Opera’s all-female Gluck’s Orfeo.

I particularly loved the characterization of Pirate King by Jonathan Spencer, a 29-year-old Lamplighters veteran. It was refreshing to see a Pirate King NOT based on Jack Sparrow! With his booming bass voice, he stole the scenes whenever he was in. I also loved his piano & ritardando take on the word “For…” prior to the “I am the Pirate King” chorus. I never heard it done that way, and it was beautiful! His was a very kind hearted, if rather meek, Pirate King (to go with the directional plot, I guess).

The Major-General Stanley of F. Lawrence Ewing, a 30-years-old Lamplighters veteran, was an interesting one. His take of the most famous aria “I am the very model of a modern Major-General” was certainly not the fastest one or the most dazzling one, but he enunciated it really well that every word was very easy to follow.

I thought he was a bit soft in his delivery and oftentimes he got drawn by the chorus, but he did act very well. Another Lamplighters veteran, Charles Martin made a very comical Police Sergeant in Act 2. All other secondary roles were handled very well.

On the program, conductor David Drummond revealed that Pirates was actually the first Gilbert & Sullivan’s work he ever conducted some 45 years ago. His long association with the work clearly showed in his reading; it was an exciting reading, yet sensitive to the singers’ needs. Even the Overture was a rolling good time! As usual, the chorus was immaculate and they acted very well as Pirates and General-Major’s daughters.

Towards the end of Act two, two directional choices struck me as being really excellent and worth mentioning. After Ruth mentioned that the pirates were “all noblemen who have gone wrong”, instead of Major-General’s own decision to marry his daughters to the Pirates, one of his daughters was seen to give him a piece of paper stating they were willing to marry the Pirates. I thought that was very well done to keep up with the theme.

Lastly, just before the end, Elisa, who dressed like Indiana Jones the whole time, was shown to flirt with Ruth! (This is San Francisco, after all!)

All in all, it was a very auspicious start to the Lamplighter’s 66thseason. Next they will tackle Stephen Sondheim’s elegiac A Little Night Music in February 2019.