This past weekend was a busy one for operas in San Francisco (and Bay Area). 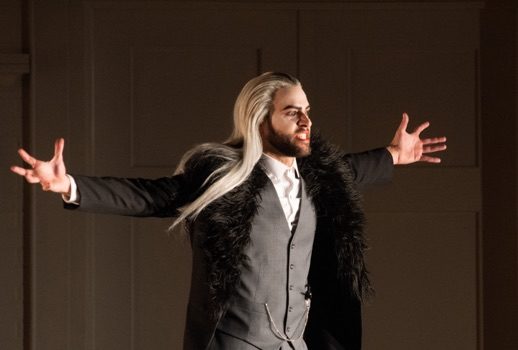 This past weekend was a busy one for operas in San Francisco (and Bay Area). First, it was time for the second fully-staged Merola Opera Program’s 2018 opera production, Stravinsky’s neoclassical moral fable The Rake’s Progress. This 1951 opera, with libretto written by W. H. Auden and Chester Kallman based on William Hogarth’s eight paintings and engravings “A Rake’s Progress,” hadn’t been seen in SF Opera stage in the last 11 years, so it made a welcome appearance here.

Director Robin Guarino staged the opera with a simple white wall with 5 doors, the middle was a double-door. In front of those doors, there was elevated podium where most of the action took place. On the left and right of that podium he placed chairs (I would comment on that later). The elevated stage was also a customary of staging in the SF Conservatory of Music Hall, as there is no pit for the Orchestra here.

Her take was a rather contemporary one, although there wasn’t any specific place or time to suggest where the action took place. In addition, since there weren’t any changes in the set, there was little differentiation between the country, London, the mental institute, etc. she did, however, add little “touches” as markers, and in a way, it worked alright.

I particularly liked the candles used in the beginning of the opera. In fact, the first scene of Act 1 was very nicely done; the chorus/supernumeraries watched the scene from the chairs on the left and right, their expressions told their reactions to the action on the podium, made it look like “a play in a play” concept that would have worked well for this opera.

Alas, this went out of the window during the second scene, as the chorus turned into active participants of the London brothel. In a true SF style, the chorus, consisted of other Merola members, donned the sleazy outfits with gusto, and yes, complete with drag as well!

She had a few tricks up her sleeve as well, most notably Baba the Turk’s sedan chair in Act 2 that was in a shape of a tall apartment! The audience had so much fun with it. Baba sang her frustration having to wait while opening the roof of the “house” sedan. The whole scene reminded me the Chinese wedding ritual, where the bride came in a carriage shaped like a pagoda!

It didn’t help that when Baba finally got out of it, she was in a gold gown a la Turandot! My fellow audience probably thought I was crazy for laughing out loud at this scene! Later on the same act, that “house” sedan turned into the stone-into-bread machine. Here, too, I liked the subtle directional touch that she added, where Nick supplied the bread in that machine whenever Tom didn’t look, so it was clear that the whole machine was a sham from the beginning.

What really elevated this staging was the amazing lighting design by Eric Watkins; it was really telling the story! Few scenes were particularly memorable; when Nick announced “The progress of a rake begins!”, bright light was on cue on Nick’s face the moment he grinned to the audience.

Equally memorable was when Nick turned back the time during the second act, and particularly during the grave scene. The stage was empty with a single trapdoor and bright yellow lights came out from the trapdoor, as if Hell was waiting for Tom. Really amazing!

The Merola singers were almost uniformly good. I was most impressed with Meigui Zhang as Anne, the voice of innocence. Her rather dark soprano voice soared and she acted well as the sweet and tender Anne. She looked rather angelic too in her turquoise gown.

Christopher Oglesby made full use of his voice for the role of Tom Rakewell, but his characterization made Tom rather unsympathetic right from the beginning. Jacob Scharfman was an enigma to me; I feel that his rather light baritone didn’t have the necessary menace to be Nick, but he looked scary enough (reminded me a lot of Lucius Malfoy with his blonde long locks).

As Baba the Turk, Anne Meguire did look larger than life, although she got drowned a bit by the orchestra. Ted Allen Pickell made a steely Father Truelove, Alexandra Urquiola a seductive Mother Goose (for once, she was sung nicely!) and Addison Marlor hammed it up as the auctioneer, complete with his Vegas outfit!

Mark Morash conducted the score emphasizing on the classical aspects of it; Stravinsky’s score really sounded like Mozart! It was fine to my ears, but I would understand if others wanted a more rugged approach. Nevertheless, he got a loud cheer during the final bows. I was a little bit disappointed with the chorus of Merola artists; they were loud alright, but not always coherent. They did extremely well act as the whores of the brothel, and later, the patients at the mental institute.