Handel’s dramatic oratorios are very difficult to stage—many clutch their pearls while bemoaning “…but they were never meant to be staged”—and require a vivid theatrical imagination to bring them to life. Director Barrie Kosky’s Glyndebourne 2015 production of Handel’s 1739 oratorio Saul (released on Opus Arte DVD) shows just such an imagination as well as a strong cast and design team. The familiar Biblical tale begins with the aftermath of David’s slaying of Goliath, and Kosky eschews any attempt at realism, leading us through the story in an almost dreamlike state.

Kosky calls himself an “extravagant minimalist” and here, the costumes are extravagant and the scenic elements minimal, both created with great style by designer Katrin Lea Tag. At the beginning, we see only the severed head of Goliath; after the prelude, we have decorated banquet tables reflecting the Israelites’ celebration of the victory of David.

The chorus sings thanks to God and praises David, dressed in exaggerated elements of baroque costumes. The arrival of King Saul, his son Jonathan and daughters, the haughty Merab and the plaintive Michal, begins the cycle of jealousy and madness that brings down the King and leads to Israel’s defeat by the Philistines.

At first, the joyful Saul offers David the hand of his daughter Merab, but she spurns him as a commoner; meanwhile her sister Michal expresses her love for David. Merab’s refusal infuriates Saul, who begins to burn with jealousy of David as the Israelite women offer the victor tributes. In another interesting choice by the director, the production conflates the roles of Abner (Saul’s advisor), the High Priest, the Amalekite, and Doeg into one single character costumed as a sort of cross between the Emcee from Cabaret and the High Priest of Baal from Samson et Dalila.

He functions here rather like Lear’s Fool, commenting on Saul’s descent into madness; in fact, elements of King Lear are everywhere as Saul becomes increasingly isolated, desperate, and estranged from his family.

Another production element that works very well is the inclusion of six dancers who enliven some of the long instrumental passages in the inventive and clever choreography by Otto Pichler. These mostly amusing dance sequences contribute mightily to the dreamlike landscape of the production.

I also must mention the utterly grotesque scene where the mad Saul seeks out the Witch of Endor for aid. Emerging from the ground like a deformed Erda, John Graham-Hall plays the witch suckling Saul to her pendulous breasts in a scene actually uncomfortable to watch. The milk-dripping Saul transforms into the spirit of Samuel, who predicts the downfall of the kingdom.

The excellent singing actor Christopher Purves plays Saul with very broad strokes, using his remarkable physical versatility to make Saul’s madness even more vivid. He shakes, he gibbers, he lashes out in fury and rage, all the while singing powerfully, though his voice seems a bit heavy for some of the faster passages. Countertenor Iestyn Davies is a gentle, quiet, and very human David, singing with great beauty and purity of tone; Kosky implies a bit of homoeroticism in David’s friendship with Jonathan (an excellent Paul Appleby.)

Lucy Crowe is a ravishing Merab, easily singing the most difficult coloratura passages and floating some of the most gorgeous high notes I’ve heard in years. The weak link is Sophie Bevan’s Michal, sincere in her desperate passion for David but sounding whiny and hard-edged in the upper register. Benjamin Hulett has a grotesque charm in the multiple roles of Saul’s advisor, with stylized movement that works very well.

Ivor Bolton’s mastery of Handel’s scores is well known, and here he draws a lively and very precise reading from the fine Orchestra of the Age of Enlightenment. Communication between conductor, orchestra, and singer is exemplary here. In Handel oratorios, of course, the chorus is of vital importance in the duel role of characters and commenters. Under Chorus Master Jeremy Bines, this chorus sings and acts with superb clarity and diction and does extremely well with choreographed moments when the whole chorus is involved.

The entire cast, orchestra, and dancers have clearly “bought into” Kosky’s ideas and bring fine singing, playing and dramatic commitment to Handel’s difficult score. This reviewer is not the biggest fan of Handel, but here I found both musical and dramatic pleasures. 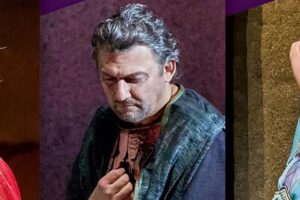