I was hopeful that my next operatic engagement would offer greater rewards: Norma at the Edinburgh Festival. After enduring a pitiful performance of Verdi’s Aida at one of Italy’s most beautiful opera houses—Napoli’s Teatro San Carlo—in an ugly, mindless production performed in the “any arm you can raise, I can raise higher” style of acting, I was hopeful that my next operatic engagement would offer greater rewards: Norma at the Edinburgh Festival.

My first introduction to Bellini’s Norma—or selection thereof—was on a multi-LP collection of operatic scenes and arias. I can’t recall the name of the album (maybe one of Parterre’s illustrious contributors will recall) but among the selections I remember were Sherrill Milnes singing “Nulla silenzio” from Il Tabarro, the final scene of Berg’s Lulu, and Montserrat Caballe singing “Casta diva”. As a teenager in the 70’s I did not always have the funds to buy complete opera LPs, so more often than not my first experience hearing an opera was in the opera house itself.

With only Caballe’s “Casta Diva” as a reference I eagerly awaited my first “complete” Norma. That opportunity arrived at the Met on March 28, 1979 with a cast headed by Shirley Verrett, Elena Obratsova and Carlo Cossutta. Or so I thought. Alas, my Mother (who held the car keys) and my brother were not taken with Bellini’s opera and we left at the first intermission. I on the other hand was smitten and could not wait to encounter Norma again. Since that first thwarted attempt I have heard Adelaide Negri (the Scotto cancellation), Olivia Stapp, Jane Eaglen, Marina Mescheriakova (a Papian cancellation), Angela Meade (Caramoor, Washington National Opera and the Met) and Sondra Radvanovsky perform the title role live. To that list I can now add Cecilia Bartoli.

Through the kindness of a friend I was given an advance copy of Bartoli’s 2013 recording and found it revelatory. So when the opportunity presented itself to see and hear Bartoli & company in Edinburgh I jumped at the chance. Performing a note-complete version of the critical edition by Maurizio Biondi and Riccardo Minasi -and using the Salzburg Festival production directed by Moshe Leiser and Patrice Caurier– Bartoli gave one of the most fully-realized and compelling performances I have ever encountered in my 40 years of opera-going. Her performance was of a single piece.

Impossible to separate from the staging, every element of her portrayal came from some musical and emotional truth and perfectly calibrated to her current vocal state. I had seen and enjoyed Bartoli’s three role assumptions at the Met –all comedic– but I was unprepared for the dramatic intensity she brought to Bellini’s priestess. Her “Tremi tu?…e perchi” and “Oh non tremare”, were frightening in its intensity. This was my first encounter with a Norma who seemed actually capable of killing her children.

But if I were to single out one moment in Bartoli’s performance that will remain with me it would be her “Son io.” Most sopranos treat it as a moment of immense nobility, the three-note phrase sung in a haunting pianissimo. Here instead Bartoli—infuriated that Pollione would not capitulate to her wishes—pounded her chest and hurled the two word phrase at him. But as soon as the words left her mouth, the horror of what she had done and the repercussions her impulsiveness would have on her children were achingly realized. With her truth exposed, “Qual cor tradisti” was staged and sung so intimately I felt like a voyeur. “Deh! Non volerli vittime” (my favorite moment in the opera) heartbreaking in its earnestness.

Vocally Bartoli detractors would find much to carp about. The mannerisms that have been part and parcel of her singing throughout her career were fully in evidence, and it was quite clear that she was willing to sacrifice beauty of tone on both extremes of her voice for dramatic effect. But I was spellbound, flaws and all. Perhaps it was opening night nerves or simply pacing but it took some time for the voice to settle in. The recitative to “Casta diva” was clipped and somewhat blunt and she sounded all of her 50 years. But the aria found her on firmer footing and by the cabaletta “Ah! bello a me ritorna” she seemed in complete control. Hers was a performance that grew more vocally secure as the evening progressed.

The role of Pollione held no terrors for John Osborn. His opening “Meco all’altar di Venere” and subsequent cabaletta were dispatched with cocky ease –his effortless high notes thrillingly filling the intimate Festival Theater. The melting, hushed seduction he brought to “Vieni in Roma” made Adalgisa’s acquiescence an inevitability. And as staged and performed, his recognition of Norma’s sacrifice and reconciliation in the closing pages of the opera were convincingly and movingly portrayed.

Special mention must be made to the conductor Gianluca Capuano (the chorus master of the Swiss Radio and Television chorus) who stepped in at the last moment to replace the indisposed conductor Diego Fasolis. Considering the blistering tempi and relatively new edition of the opera it was a testament to the orchestra, chorus and soloists that the performance went off without any discernable issues.

The staging itself updates the action of the opera to occupied France during WWII. We first meet Norma in a pantomime before the music starts. The curtain opens to reveal a schoolroom in France. Norma is seated at a table with her back to the audience working in a ledger book. Schoolchildren play in a courtyard outside the room. Clothilde calls the school-children in from their playtime and lines them up in formation. They enter their classroom as the orchestra begins the Sinfonia. The curtain closes.

As the prelude progresses the curtain again opens. Norma is still seated at her table. The door to the schoolroom opens and Italian/”Roman” officers enter. They head into the classroom and extract Clothilde who is pressed to present her papers. Nervously looking at Norma, who has risen from her seat, they allow her to return to the classroom once her papers appear to be in order. Pollione, who has remained in the doorway during this scene walks toward Norma and kisses her hand. She visibly shudders and loses her balance as he walks out. The curtain closes. When the curtain opens again the classroom has been co-opted as a refuge for French resistance fighters. The opera proper begins.

I found the updating quite persuasive in spotlighting the brutal and dangerous situation into which Norma has placed herself more compellingly than any production I have seen. The one major drawback was its inability to fully reconcile the religious aspects so specific to Norma’s character. For traditionalists, the stage direction never veered too far from those one would find in a more conventional production, but the personal exchanges were incredibly well thought out and detailed. These characters were fully formed three-dimensional individuals whose interactions never felt forced or false.

Looking back over nearly 800 opera performances I tried to recall other performances that so perfectly combined the vocal and dramatic realization of a role. I was able to summon memories of Teresa Stratas as Jenny and Mimi, Maria Ewing’s Blanche de la Force, Lorraine Hunt Lieberson’s Dido, Karita Mattila’s first Salome and Peter Mattei’s recent Amfortas. Cecilia Bartoli now joins that company.

As I enter my fifth decade of opera-going I find that I prefer to be challenged rather than comforted by friendly and familiar productions. We crazy opera fans put up with many average, mediocre and sometimes dreadful performances with the hope that maybe, just maybe the next one will offer something transcendent. So thank you to Bartoli and company for providing me with such an evening. 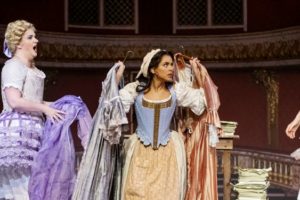