La Cieca preens proudly  to present a peerless pair of protégés (left to right) Squirrel and Maury D’Annato. The bromancers attended (or one should say “took in”) last night’s Ariadne auf Naxos at the Met, and as of early this afternoon they were still deconstructing.

maury: oh hey look at us

squirrel: well who would not.  oh hey were you at Brunnhilde auf Naxos last night??

squirrel: does that have a cleansing effect?

squirrel: I’m shocked you didn’t use any commas  but mm yes,  testing, testing, is this thing on?

maury: I mean…it’s hard to get around the elephant in the room, the elphant singing tenor.

maury: The elphant bravely singing tenor with a cold, but…

squirrel: and what about those asswipes in FC booing him?? not really fair.

maury: Let’s just get this out of the way: he left out a big chunk of the role. For anyone who wasn’t listening at home.  (Was it broadcast?)

squirrel: I especially agree about the latter

maury: Did I tell you this old guy tried to enlist me in his outrage by the cancellation billboard downstairs? Like there are all these really great Bacchi standing around not getting their shot.

squirrel: Ha. Yes, at the after party.  Let’s make up fake names for all who attended?

squirrel: It wouldnt be fair to drag them into this quagmire.

maury: that is true.

squirrel: I’m referring to the Zerbinetta, it’s not a pseudonym for THAT GUY

maury: ha,  Ok.  This feels like the most overloaded question.  Yes, I did.  It wasn’t a Zerbinetta for the ages, but there were some really good things about it.

maury: See I knew you were going to hate on her, but I feel this is in part because you’re a Damrau loyalist.  But go ahead. Let ‘er rip.

squirrel: well as i was telling “Zeke Walsh” to my left, while having fried calamari and beer…

maury: oh get you with the names.  i was like “I can’t possibly think of names”,  (now listening to Stratas as Komponist)

squirrel: kim reminded me of these sanguine polish waitresses at a bar i went to often in vienna,  they’d flirt with you in lousy german to get bigger tips.

maury: that is so specific.

maury: oh I see your point.  yeah she crossed a line as far as futzing with the music and I wish she wouldn’t do that.  But…  I dunno, do you want a short, tedious paragraph about why I did like her?

squirrel: Well if this is not the space for that, …

maury: right.  Ok so Zerbinetta.  The worst thing that ever happens to her is that she’s played for pure cute.  Like…well for me, Damrau went a ways down this road.  I get all happy when she’s given another dimension, which I usually assume is going to be a little world-weariness.

squirrel: yeah, i mean, it’s written into the role so this is a fair expectation

maury: and Kim didn’t do that.  But there was a certain innocence, and maybe some will have read this as blandness, but for me it still made her Zerb more rounded than some.

maury: you’ll concede it was technically quite accomplished except for where you have to swoop up to that one, eh, D I guess?  not the one with the trill.

squirrel: yes but she didn’t sound as polished and secure as in her Olympia,  I’m just not going to like her.

maury: that’s fine.  I’m going to like her reasonably well.

squirrel: what was “Jock Jarboe’s” big problem with the composer? i thought she made a nice impression.

maury: I want to toss in a caveat about everything, which is that more and more, the balance in balc boxes seems to get in the way. Last night I kept hearing so much organ it was like I was at a baseball game or a church service (two situations I have studious avoided in my adult life),  hah.  Jock Jarboe.  You’re killin me

squirrel: oh yeah, i love the organ in the orchestration but it was just a bit much.

squirrel: i was expecting, maybe, Also Sprach Zarathustra to break forth

maury: no kiddin!,  so it wasn’t just my balc box.

maury: i’ve always liked them.  nice to see a face now and then.

squirrel: nina stemme seems pretty. I wouldn’t know, I was way up in the squirrel nest

maury: you liked her?,  I hope you liked her.  It’ll be more good cop/bad cop.  Not that I thought she was bad.

squirrel: yes, and thought she was commanding, more or less, in the prologue.

maury: More Hannity/whatsit.  Fair and Balanced,  did she move you on a gut level?  great that sounded gross but.

squirrel: not, mind you, knock everyone else off the stage commanding, but,  hmm, no i did not have to run to the mens room

maury: let’s take another pass at this: did you find her emotionally compelling?

squirrel: these are loaded questions,  the composer has the best text in the prologue, the only stuff that’s not just purely function and/or slapstick, and yes she sold it admirably. It was not loud, but carried up to FC ok.  I found it convincing.

maury: oh yeah, seemed perfectly well Met-sized.  It’s one of my habitual dodges when I don’t want to be negative, but I think I’ll like her better in something else.

maury: sometimes my arms bend backwards.  do you get up at midnight and stop clocks?

squirrel: let’s not talk about it.

maury: Fair enough!  Hey have you noticed how I haven’t brought up Mentzer?

maury: I mention my not mentioning Mentzer because I feel like it could be a drinking game.  Everyone do a shot when Maury compares absolutely anyone singing der Komponist to Mentzer.

squirrel: Suzanne Mentzer drinking game? This is going to be all the rage.

maury: and then they all died of alcohol poisoning.

squirrel: Want to make bets on how the Parterre public liked the broadcast?,  I mean, based on the long faces over dinner at our secret Blogger’s Cave….

maury: I mean…we’re going to have to find someone fairly slow to take the “Everyone Loved It!” side of the bet.

maury: maybe not.  so Stemme, yeah.  She’s opera hot or something?

squirrel: I’m unfamiliar with the phrase, but yeah.

maury: Oh, it was originated by the Wellsungs, them what we are blatantly ripping off by indulging in this format.

squirrel: Oh, I should have guessed.

maury: (I feel there should be an acknowledgment)

squirrel: Shout out to wellsungs!

maury: Wellsungs in da house or whatever the kids were saying ten years ago.

squirrel: But others on the internetz to this too, no? I mean, I don’t know.

maury: The thing about Stemme is I lost all track of how she was doing because I was so tense for poor M. Hendrick up there, giving it a good shot but living the nightmare of losing your voice in front of a big house.

squirrel: True, he was croakin’

maury: THE big house.  by which is not intended prison.

maury: But Stemme, the voice is major league no?

squirrel: that big, brown, bullhorn of a soprano – i mean, you can’t not like that. It’s like an enormous roast beef sandwich… oh wait,  now I’m hungry.

squirrel: Over dinner at the Blogger Cave, “Ronalan” told me she’s singing Brunnhildes at San Fran?

maury: This is true, I believe.  And “Ronalan” tends to know.  I mean, not to jinx the lady, but there is a little Nilsson color there, is not there?

squirrel: would probably be more apt casting, but I enjoyed the Ariadne anyway,  Yes, good call,  she is an artist and I think not likely to be jinxed by the comparison.  are you a bravo shouter?,  or a whistler?

maury: tracy dahl and her weird voice just sang one of my favorite lines: auf dem Theater spiele ich die Kokette etc.  ,  i shout bravo in a not fully convincing way.  what do you do?

squirrel: same, then i get a little shy

maury: I shouted “bravi” for the rather deluxe nymphs, and then realized I’d made them into dudes.

maury: ACB says it’s not so scary as it looks.  I wouldn’t want to be up there.  So it’s fortunate I’m neither a talented singer nor a soprano nor even a dame.

squirrel: I’ve always considered that fortunate too, I mean about myself.

maury: ok should we wrap up? I gotta get on a bus headed into a snowstorm.

squirrel: ok in summary,  see this opera, one thumb up?

maury: pretty much.  some stuff will go better, and it remains an iconic and wonderful production and blah blah.

maury: I felt like it might be a bit singer-unfriendly but you’re a much better judge of conducting.  So you get the last word, except that I just kind of maybe took it.

squirrel: True, he pushed Ms Stemme a little in the languid parts, I don’ think it was unfriendly. He’s a man of the opera house fer sher,  ok

squirrel: i could make a joke about the great pumpkin..  but i need a sandwich

maury: yeah i think your stomach has the right idea.  on that note…

maury: edit to read “your stomach is good editor “ 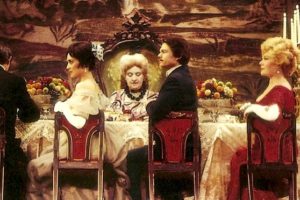