Du Yun is the Pulitzer Prize-winning composer of Angel’s Bone. Her new opera, In Our Daughter’s Eyes, a one-act monodrama for bass-baritone and an orchestra of six, opened the current tenth Prototype Festival, in a performance at the Baruch Performing Arts Center, starring erstwhile Met regular Nathan Gunn. 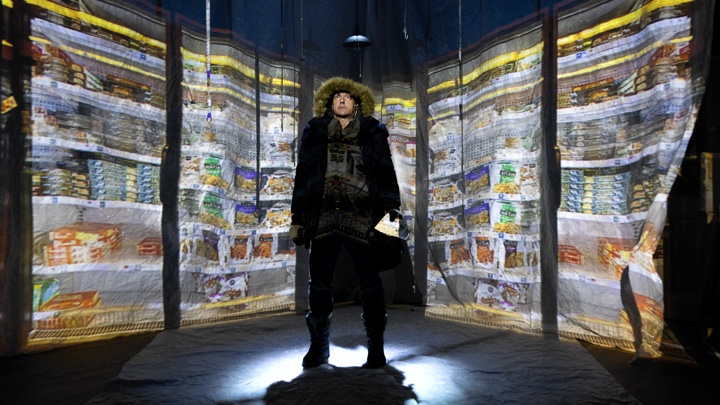 The extraordinary libretto by Michael Joseph McQuilken takes place largely within the mind of a man awaiting the birth of his first child—a theme that reminded me of the “Soliloquy” from Carousel, which Gunn has performed with the New York Philharmonic.

“Soliloquy” (aka “My Boy Bill”), revolutionary for musical theater for its time (1945) in its lengthy internal questing by an inarticulate character, came to mind when I read the synopsis of Du Yun’s opera, which is much longer (about 75 minutes) and makes no use of the familiar verse-forms and melody-forms on which Rodgers and Hammerstein constructed their famous number.

Our nameless Hero is an American child-man, regretting the irresponsibility of his youth (and his alcohol addiction), and reveling in daydreams of flight, of space travel, of fatherhood. He pulls himself together due to love for his wife and unborn child, and at the peak of his joyous resolve is confronted with the possibility—the near certainty, in fact—that his daughter will be stillborn.

The unseen wife is the strong and mature figure here: it is she who openly confronts their destiny, and decides to donate those parts of the child she is carrying that can be useful to other babies. The ending, therefore, is bittersweet: They do not have a child, but in time they meet the child who has their daughter’s eyes, and has been told (in vague and magical terms) how she got them. The hero, the only character who sings, is both a parent and not a parent. It is a modern problem (praise be to medical technology) and yet an ancient one.

At the Metropolitan, I’ve always found Gunn a bland artist, the dullest of Billy Budds and Figaros, a fine-looking man but a second-rate singer. In concert performances of Broadway musicals, on the other hand—Lancelot in Camelot was a particular triumph—his forthright personality fleshes out these unsubtle roles, easily achieves climaxes and plot points, and his American diction is excellent.

In a properly run world, Gunn would never have gone near the opera house but would be Broadway’s reigning matinee idol, for whom the composers of baritone standards (most of them long gone by the time Gunn appeared on the scene) would have created the sort of roles in which Alfred Drake or Richard Kiley triumphed.

But if the grandeur of the Metropolitan tended to reduce Gunn’s voice to pleasing but one-note ineffectiveness, the intimacy of the space at the Baruch Performing Arts Center (aided by electronic enhancement) allowed him to inhabit his character and display his ranging emotions, even when he was living daydreams that occurred to him while performing anticipatory chores—building a crib, speculating on childish conversations, showing the child a piano factory. He is an able actor on an intimate stage, and his voice has more personality when not seduced by effective melody.

For Du Yun does not give her character much melody with which to express himself. The hero speaks, half-sings, exults in recitative or in a line or two of uncompleted song. The orchestrations are not melodiously cheerful so that they do not intrude on the story line. Gunn does not proclaim melodious lines but speaks or sings Sprechstimme, with a singsong for his flights (literally) of fantasy, his goofy reflections on the delights of upcoming fatherhood, his tense brooding and action at the crisis, appealing in the bittersweet conclusion.

In the instrumentation, too, mostly winds, performed under Kamna Gupta’s direction by six musicians stationed behind the set, I failed to detect much lyrical bent to elaborate on the emotions of the story. The delicate, metallic sound-effects seemed to comment ironically on the action, like tiny exclamation marks, rather than embody the emotional journey and message as in the case of traditional opera. A monodrama is difficult to encircle and accompany, but this one seemed to be taking place in separate emotional beds.

In Our Daughter’s Eyes, with its overarching, deep-delving tragedy and its reliance on surface special effects, sound design, visual design, bits of projection in the most modern manner, provided a splendid showcase for Gunn’s talents at their current ease but delved shallowly into the story problems it purported to explore.

In Our Daughter’s Eyes continues through January 15.