Lyric Opera of Chicago's Don Carlos was a real feast of good singing and orchestral grandeur. 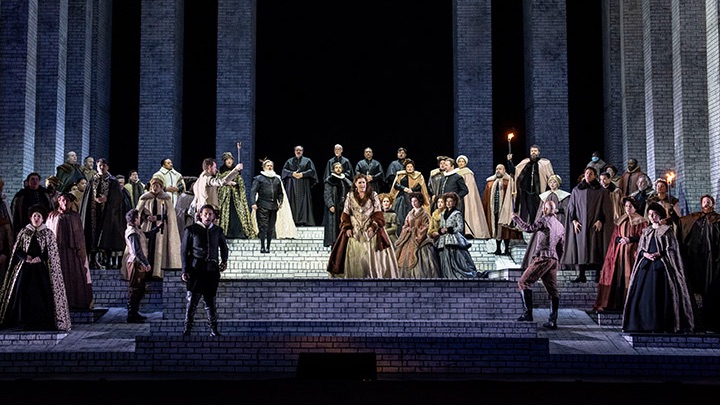 Don Carlos strikes me as Verdi’s most complex and fascinating work (though until Thursday afternoon I had only seen the Italian version).  I love its fully realized, three-dimensional characters and the seriousness of their dilemmas.

The opera also deals with some very deep issues: the clash of the personal versus the political; passion and love versus duty and honor; tyranny versus the longing for freedom, and the conflict between secular law and religious doctrine embodied by the unyielding Grand Inquisitor.  And, above all, the glorious music with nonstop powerful arias and scenes.

Lyric Opera of Chicago has assembled a world-class group of singers (and in most cases, actors) to bring the story alive in French.  The delicacy of the French language gives the opera a delicate, romantic quality, less intense than in Italian, but it serves the story very well indeed.

The element that doesn’t serve the story is Robert Jones’ cold, looming set design, composed of pillars and platforms of grey brick.  The opening Fontainebleau scene and the garden scene make no sense without a hint of greenery or lushness.  The many lines describing the beauty of the forest go for naught.

The set works rather well for the monastery scenes, though the only concession to reality is a grey brick black wall that rises for the indoor scene and goes back down for the outdoors.  In addition, the many platform levels serve as an “actor trap,” as we watched several choristers seeming to trip and barely keep themselves from falling.

The worst example of this was in the curtain call, as our Elisabetta’s skirt caught on a platform edge and she had to be rescued by the Grand Inquisitor!  Happily, we had very good, moody lighting from original designer Joachim Klein and revival designer Jan Hartmann.  Brigitte Reiffenstuel’s costumes are stylish and appropriate, especially those of the women.  Elisabetta’s golden dress in the auto-da-fe scene is a wonder. 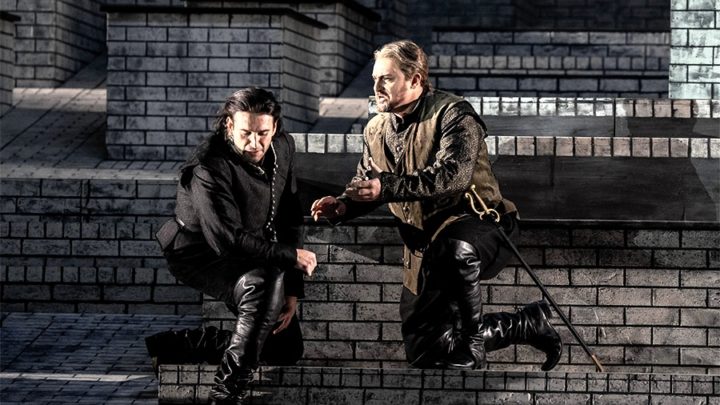 Despite the designs, we had a marvelous afternoon of music-making.  Enrique Mazzola led a stunning performance from the Lyric Opera Orchestra, immensely supportive of the singers and bringing Verdi’s moving music vividly to life.

Tenor Joshua Guerrera, who was so moving as Macduff last season, sang with ardency and real emotional power—his agony over the loss of Elisabetta is deeply felt.  He used his clarion tenor with tonal beauty and incisive phrasing.  His potent acting made the character’s terrible dilemmas seem very real indeed.

He was matched with a wonderful performance by soprano Rachel Willis-Sorenson, who sang throughout with limpid beauty and delicacy.  Her final aria “Toi qui sus le néant” was a model of varied emotions and vocal colors.  Perhaps the most moving moment came in Act 1, when Elisabetta is told she will be wedded to the King instead of the Carlos she already loves.

When asked if she will accept marriage to the King, she took an agonized pause before barely being able to get out a terribly painful “Oui.” It’s a great moment in an opera full of them. It should also be said that Guerrero and Willis-Sorenson have tremendous chemistry between them, and it crackles with connection whether they are together or apart.

Clementine Margaine is a powerful, fierce Princess Eboli both as a singer and actress.  Her “Veil Song” in the second act was a marvel, going from delicate romance to remarkable moments of sheer volume that garnered a huge ovation.  She was “a woman scorned” in the Garden scene, and is deeply remorseful as she admits her wrongdoing to the Queen.  Her aria “O don fatal”, one of my favorites in all of Verdi, was dispatched beautifully with all its emotional power.

Baritone Igor Golovatenko made an excellent Lyric debut as Carlos’ friend loyal friend Rodrigue, his potent voice filled with warmth and tonal beauty.  And though his acting skills were rudimentary, he still managed to make the deep friendship connection with Carlos come to life. 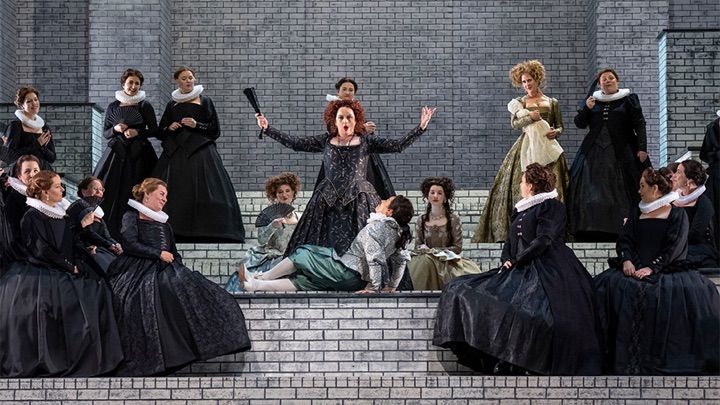 The only disappointment for me was the King Phillipe of Russian bass Dmitri Belosselskiy, a singer I have enjoyed in previous seasons.  He seemed vocally a bit bland, and he was failed to give life to the troubled aria “Elle ne m’aime pas” Belosselskiy was unable to fully reflect the King’s deep conflicts in the scene.  It was a perfectly competent performance amid a lot of vivid ones.  Solomon Howard was an unusually vicious, rabid Grand Inquisitor.  He was appropriately scary.

I found Denis Velez rather annoying as a too-cutesy Thibault.  Peixin Chen was a fine Monk.

Director David McVicar and revival director Axel Weidauer told the story very well and crafted the production for maximum emotional impact.  There was quite a bit of odd blocking choices, with lots of aimless wandering during some arias, but I suppose it’s tough to block singers appropriately on those grey platforms with multiple levels.  But they succeeded mightily in keeping the action moving so that the opera’s four hours went by without longueurs.

I enjoyed very much my first chance to see/hear the opera in French, and it was a real feast of good singing and orchestral grandeur.  I must also mention the splendid work of the Lyric Opera Chorus under Michael Black, singing and acting with precision and style.