Down for the comte

Lyric Opera of Chicago's Le Comte Ory was a lovely cake with waaaay too much frosting. 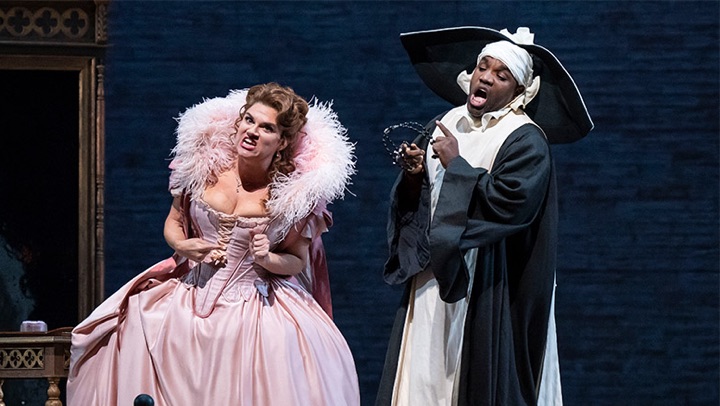 The Metropolitan Opera 2011 production of Rossini’s 1828 comic opera Le Comte Ory came to Chicago on Sunday afternoon, serving as its Lyric Opera Premiere and featuring the celebrated bel canto tenor Lawrence Brownlee in the title role.  In a show originally directed for the Met by Bartlett Sher, Revival Director Kathleen Smith Belcher produced a rollicking, frothy, bumptious version of the piece but, alas, it was always amusing but almost never funny.

The piece is set here as an opera-within-an-opera.  The set by Michael Yeargan is like a large barn with a large raised platform stage and footlights and a pullable curtain behind to confine the action.  It begins with the entrance of a silent character called The Prompter, actually more of a Stage Manager (a physically agile if frenetic Kirk Osgood) who inspects the stage and directs (and amusingly spars) with cast and crew and is a constant presence at his table at extreme left and right sides of the stage.

The opera is a standard guy-tries-to seduce-woman-in disguises scenario as the Count Ory disguises himself first as a prophetic “hermit” and later as a nun (!) in order to gain entrance to the rooms of the Countess Adele. By setting the piece in a theatre, the production doubles down on the already theatrical nature of the opera, frequently over powering the slim and simple story with melodramatic gestures and an acting style that is almost farcical.

Unfortunately, this over-the-top theatricality robs the characters of their humanity and depth.  And while Sher and Belcher keep the piece moving quickly and with constant comic business, we are at pains to care about any of the characters. 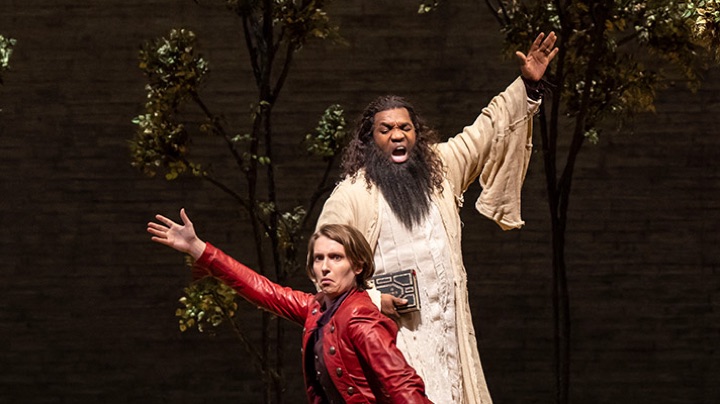 The exception is the brilliant performance by Brownlee, who is really the only performer who adapts the style as his own and manages to be both amusing and heartfelt at the same time. He was responsible for the few generalized laughs in the performance, especially as his first entrance as “the hermit.” And his singing throughout the performance was simply spectacular—high notes without a hint of strain, beautifully produced tone, rich use of vocal colorings.  Brownlee knows his Rossini style, and the bel canto fireworks sometimes take the breath away.

His vocal equal was the stunning coloratura soprano Kathryn Lewek as Countess Adele, a voice of beauty, versatility, and capable of astonishing coloratura with every note a crystalline delight.  Her scena near the end of Act One garnered the largest ovation of the afternoon, and she was deservedly greeted with the same at her curtain call.  I must say she was a victim of the overly farcical gesturing and face-making, however.  Her “silent movie” acting style just didn’t work.

There was able support for the leads from Kayleigh Decker in the pants role of Isolier, Countess Adele’s cousin and would-be lover.  The mezzo sang with grace and charm and an affecting sense of desperation as she tried to deal with Ory and his competition for the Countess.  Italian bass Mirco Palazzi made his Lyric debut as Ory’s tutor, a character who mainly serves as a way to narrate the Count’s scheming and disguising.  He sings well, but is mostly a dramatic cipher.

An indisposed Joshua Hopkins was replaced as Ory’s friend Raimbaud by the talented Ian Rucker, though Mr. Rucker’s baritone seemed a size too small for the house and seemed a bit understated when participating in Ory’s hijinks.  Zoie Reams was a gracious and suitably dark-voiced Ragonde, Countess Adele’s companion. 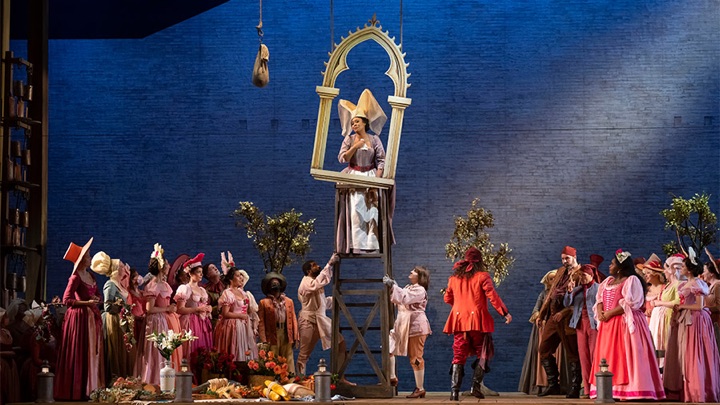 I’m very thankful, as always, for the terrific work of the Lyric Opera Chorus, who threw themselves headlong into the boisterous antics while singing with gusto and a palpable sense of fun.  The scene with the entire men’s chorus dressed as nuns, alternating between drunken carousing and chanting hymns (whenever Ragonde enters to check on them), was a delight.

The Lyric Opera Orchestra thrilled under the stylish baton of Enrique Mazzola, playing with delightful fervor among moments of quiet beauty that made a fine contrast with the more riotous scenes.  Mazzola really seems to “get” bel canto and particularly the French repertoire and has brought this expertise to several Lyric productions in recent years.

Original lighting designer Brian MacDevitt and revival designer Chris Maravich did a fine job, keeping with the brightness of the score and effective in the Act Two storm scene.  Catherine Zuber’s costumes are colorful and effective, with the chorus done in “French rural” style.

I wonder what a simpler production could do to bring out the humanity in the libretto.  It’s certainly in Rossini’s music. I kept thinking that this production was a lovely cake with waaaay too much frosting.